Thank you for growing up with us. 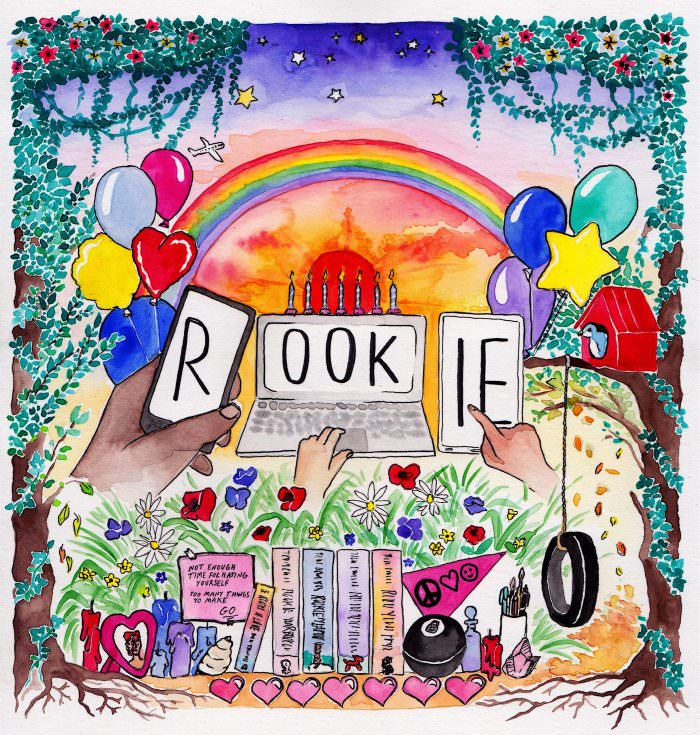 It is with a very full heart that I write that this is the last post on Rookie. The site will stay up for at least a few months, the shop will stay up until the end of the year, but the publication is folding. (Thankfully, books are forever.)

In one way, this is not my decision, because digital media has become an increasingly difficult business, and Rookie in its current form is no longer financially sustainable. And in another way, it is my decision—to not do the things that might make it financially sustainable, like selling it to new owners, taking money from investors, or asking readers for donations or subscriptions. And in yet another way, it doesn’t feel like I’m deciding not to do all that, because I have explored all of these options, and am unable to proceed with any of them. My resistance was confusing and painful to discover, and is at odds with how much Rookie means to me and how badly I would like to see it grow and evolve. It almost doesn’t feel like it should be up to me, because it has such a full life of its own, and is so connected to the lives of others.

I am feeling about 100 emotions right now, and not all of them are sad: I would actually say that most fall under “gratitude,” also “pride” and “awe” and “faith in humanity based on how this was able to even exist at all and go on for as long as it did.” But why don’t we start with why this is happening, because you’ve been reading Rookie for some time now and are probably curious, but also because the most frequent questions asked of me, and sent to Rookie, are along the lines of, “How do you discover who you are? What you want to do? Your passion in life? Your inner voice?” So this is also about that, and shortcomings, which are more worthwhile to read about—and write about, and experience—than success.

It has sometimes felt like there are two Rookies: There’s the publication that you read, that I also love reading, writing for, and editing; and then there is the company that I own and am responsible for. The former is an art project; the latter is a business. Each one needs and feeds the other, but when I started Rookie at age 15, I saw the two as mutually exclusive. Rookie had been founded, in part, as a response to feeling constantly marketed to in almost all forms of media; to being seen as a consumer rather than a reader or person. In my black-and-white view of the world, the idea of capitalizing on an audience seemed cynical, selfish, and something only evil adults do. It would be misleading to say I was a total purist, though, because I also thought Rookie was really good, and that it should reach people rather than be small and struggling. I wanted it to be able to hire more editors, pay contributors more, and grow so that not everything would need my oversight and other voices could be more prominent. I also wanted Rookie to eventually be a source of income for me, which I didn’t need it to be when I was a teenager and living at home. In those first few years, however, just the day-to-day running of the site was brain-consuming enough without also actively trying to make it as profitable as possible. And, that was the part I was most passionate about, and adept at: collaborating with writers and artists, curating and editing their work, and watching the conversations that would unfold around it.

This worked well enough for many years. At different times, two other companies were responsible for getting Rookie ads and brand partnerships. Sometimes brands came to us or we would approach ones we liked directly. We also sold books, t-shirts, and posters. Also in that time, it was possible for Rookie’s audience to grow organically, which means not without any luck/hustling/strategy whatsoever, but without spending money on jobs or services that most companies do for very obvious reasons: audience growth, business development, reader engagement, marketing. Now that I know what those jobs entail, I would not call them devil’s work or even necessary evils. They require understanding people in ways that I do not and using your brain in ways that I can’t. But from ages 15 to probably 20, I bristled at any mention of those words, at the idea of hiring someone to do any of them, of a five or even two-year plan, of meeting with investors or possible buyers, of crowdfunding or asking for donations. (Usually these concerns came from my dad, who was thinking about Rookie’s survival and my future self, and who was up against the odds in getting me to discuss any of them, what with me being A) a reclusive and grumpy teen, B) his daughter, C) part-Troll doll, and D) deeply emotionally and creatively satisfied with how Rookie was already going.)