Understanding the Weight: An Interview with Amandla Stenberg

The actor on the new film, The Hate U Give, self-preservation, and telling important stories. 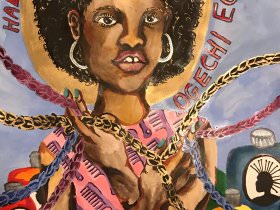 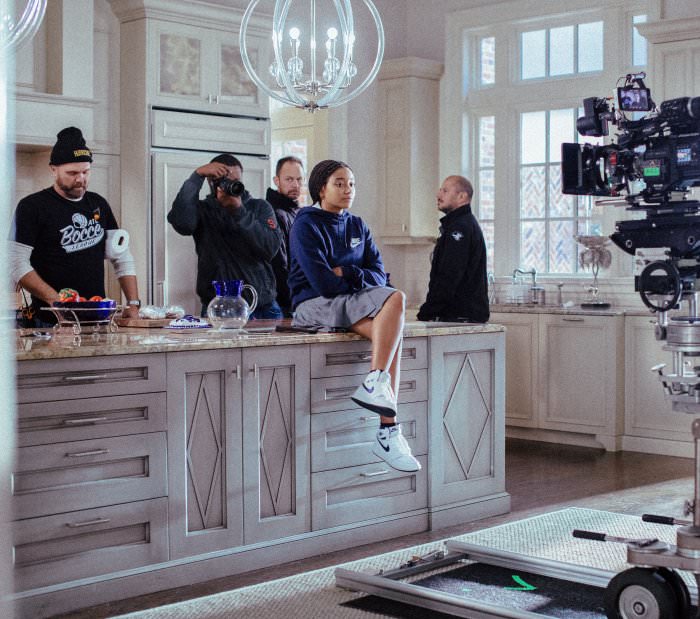 Amandla on set, by Valheria Rocha.

The Hate U Give, out in theaters today, is a film adaption of the New York Times bestselling novel by Angie Thomas. It was a book I’d heard so much about by young and adult readers alike. The book (and film) tell the story of Starr Carter, a teenage girl who attends a predominantly white prep school while also living in Garden Heights, a Black working class community. She’s in the car when the police murder her friend Khalil and, as the only witness, she must make a choice to be his voice and deal with the consequences of that decision. My favorite aspect of the film is the portrayal of Black community and family. It’s wholly authentic and akin to my own experiences. The moments that shine brightest to me revolve around the Carter family table. Conversations about race and what it means to exist in this world go hand in hand with jokes and laughter. The Hate U Give doesn’t turn a blind eye to the trauma of extrajudicial killing, but rather places it front and center, while showcasing the push and pull of Starr’s interior self as she tries not only to survive, but to do right by her friend in death as she had in life. I talked to Amandla Stenberg about the weight of bringing a character like Starr to life, the parallels between herself and the film, and taking care of oneself in the midst of such heavy subject matter.

TAYLER MONTAGUE: How did you get involved in the project?
AMANDLA STENBERG: I actually got an early manuscript of the book before it was even published. I’d gotten it because my mom has a friend who is a young adult fiction author and she had heard a lot of buzz about this one particular manuscript that there were bidding wars happening over. She had gotten her hands on a copy of it and passed it along to me because she felt that I would really relate to it because the story mirrored my own life in so many different ways. So I first read it then and fell in love with the book, and how poignant it was to see this story that was essentially a story about police brutality put into a personal narrative; but there is so much nuance to what it explores in terms of code-switching and identity, and finding your strength in your power and your truth in the midst of a lot of discrimination and institutional racism. Shortly after, I heard that FOX was optioning it to turn it into a movie and I chased it really heavily and signed on really early in the process basically without even auditioning. They were interested in having me be a part of it in order to aid the process of packaging the film, and to get a budget and get it greenlit. So yeah, I became a part of it really early on, but then as we got closer to production, they asked me to audition for the role. Essentially, I reauditioned even though I had been in the process for a while, and been in the writing room, and been kind of workshopping the character and collaborating with the director. They just wanted to ensure I had what it took to play this role, but it was amazing because it led to the formation of what the character is now, and allowed me the time and the space to really prove I could carry the weight again on my shoulders. It felt very apparent as soon as we got in that audition room that this was right, and it was synchronistic, and it was gonna be special. We went into production shortly after that, and now the movie is coming out, so it’s been a several year journey to get to this point.

When you were talking about how the book and Starr’s character in particular mirrored your life, could you elaborate more on that?
So Starr has grown up in a lower income Black community, but attends a white private school, with mainly privileged white kids who don’t understand her experience. But at the same time, she authentically inhabits that space because she has been going to that school since she was ten. That was really similar to my experience–I grew up in Leimert Park in LA, and drove an hour and a half in the morning to get to my school across town that was attended mostly by white privileged kids, and at the age of ten, I had a kind of reckoning and came to realize that I needed to alter how I presented myself in order to fit into that space. It required me to kind of have this dual identity. As I got older, I realized that I didn’t need to split myself into two parts, and that I was a cohesive, nuanced person. It’s often necessary for us–as people of color, or marginalized people, or gay people, or whatever area of identity that may be–to learn the language of code-switching and making those parts of ourselves more accessible in order to survive and succeed in whatever environment we find ourselves in. So, I had that experience really early on, and it’s something I still experience navigating Hollywood, which is a historically white institution. I felt like I could pull from my experiences growing up, in terms of playing that character, and I could pull from the experiences I’m having now.

In terms of pulling from those experiences, I know this is something that probably came up a lot in the workshopping process, and I was wondering if you could give us a behind-the-scenes look of what it feels like to workshop the script further?
We ended up creating a chart that dictated where Starr was in the spectrum of how she was presenting herself, depending on her environment. We would use code words, either from the book or from my own life, that we could reference easily on set. So, if we want to speak to the person that I am, the person that Starr is, when she was navigating the neighborhood that she comes from, we’d say ‘Leimert,’ we would say ‘Garden Heights.’ And then, when we were talking about how Starr presents herself when she is in a white environment, or having to make herself more accessible to white people–or at least the way she thinks she has to–we would reference ‘Williamson,’ which is the school Starr goes to, or ‘Wildwood,’ which is the school that I went to. So, we had a spectrum of mannerisms, of identity, that kind of traversed those two identities, and everything that exists in between. I think we had a total of five distinct scales on the spectrum of identity.