Find the Authenticity: Behind the Scenes of Skate Kitchen

An interview with director Crystal Moselle, plus a photoshoot with the cast. 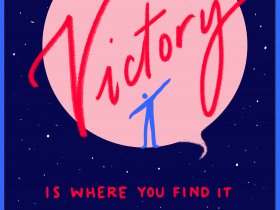 Victory Is Where You Find It

Director Crystal Moselle’s new feature-length film Skate Kitchen follows the journey of lonely skater Camille who finds friendship with an all-girl skate crew in New York City. The film is based on a real life group of girls who call themselves The Skate Kitchen, and while the film is not a documentary, the narrative flows seamlessly between candid conversations between the girls and gnarly clips of them practicing tricks at various skate parks and cruising down the streets of Manhattan. The film speaks to the importance of female empowerment and it showcases young people who are incredible passionate about something in life–a thread that exists in Moselle’s work.

Moselle first got into film when she was in high school. She grew up in Marin County, 15 minutes north of San Francisco, and through the theater program at her school, she had access to video equipment. When she was 16, she attended a summer program at Otis College of Art and Design where she took a class on filmmaking, and from there she began filming the world around her. “I realized at that point what my point of view was,” she said. “I saw that the things that I was capturing randomly were really special. Rather than try to set things up too much, when I tried to just capture things it seemed to be better. So for a very long time, I thought I should be a documentary filmmaker. I learned later that these things that I see, I can make something new out of it. But I need those references of real life, I guess.”

Moselle is evidently drawn to young people who show a true passion for something. In 2015, she premiered her first documentary feature, The Wolfpack, about a group of six boys who lived in quarantine with their parents in an apartment in Manhattan’s Lower East Side. She saw the long-haired boys weaving in and out of crowds; it was clear there was a story there and she needed to find out what it was. Upon approaching the boys, she learned they rarely left their apartment, and they only knew about the outside world through movies. The resulting documentary filmed over four years won the Grand Jury Prize at Sundance Film Festival. 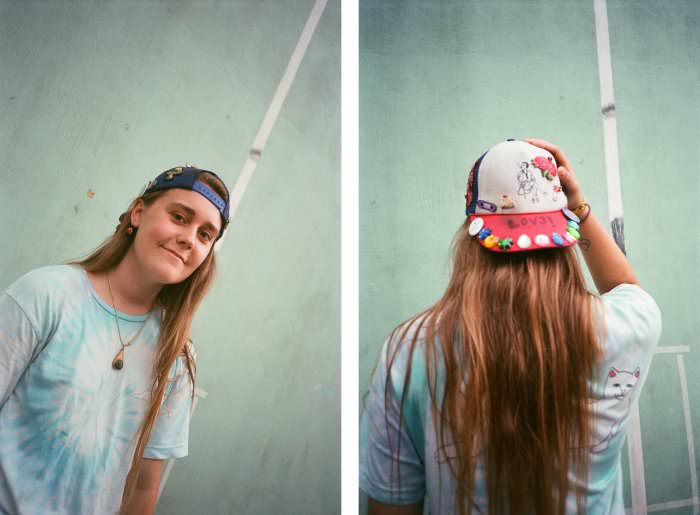 There is certainly a parallel between the boys of The Wolf Pack and the girls of Skate Kitchen. While Skate Kitchen has a fictional narrative, Moselle came across the girls who would end up founding the skate crew similarly to how she met The Wolfpack’s Angulo brothers. She recalls being on the subway in Brooklyn and seeing a group of girls all carrying skateboards. They were all listening intently to Nina Moran (who plays the brash and confident Kurt) tell a story–Moselle said her voice carried through the car and commanded attention. Moselle went over to talk to them and asked if they’d want to film something together sometime. They ended up collaborating on a short film for Miu Miu in 2016 called “That One Day,” which features the seven girls skating around lower Manhattan. The girls were relatively unknown before that short; afterwards, they saw their follower count on Instagram grow rapidly. Rachelle Vinberg, who plays the film’s protagonist Camille, found herself cast in advertisements for companies like Samsung, and the crew was featured in the New York Times among other publications. Moselle saw the reaction and wanted to take the original short and transform it into a full feature-length film. Of the process, she says, “We had a lot of conversations, I really collaborated with the girls. That’s what I really love about making a film like this. With a documentary, you really have to step back and let the story dictate itself. That’s really different than actually working with people and going in and finding the authenticity together.”

Skate Kitchen as a feature length expands on the short film’s narrative. The story follows Camille, an outcast living in Long Island with her mother. Through Instagram, she discovers a group of girls who skate in Manhattan, and she decides to take the train into the city to find these girls and skate with them. Skate Kitchen celebrates female friendship and shows the power of finding your people. The girls bat boys away at the skatepark; they’re not afraid to start fights and defend their right to skate the same streets and parks that the boys do. Moselle also shows the nuances of girlhood. There is vulnerability–she includes frank conversations between the girls about sexual assault, something you never see in theaters. Then there is the tension of the gender binary, being in a girl’s body while doing what is traditionally considered to be a boy’s sport. What happens when a girl wants to skate with the boys? 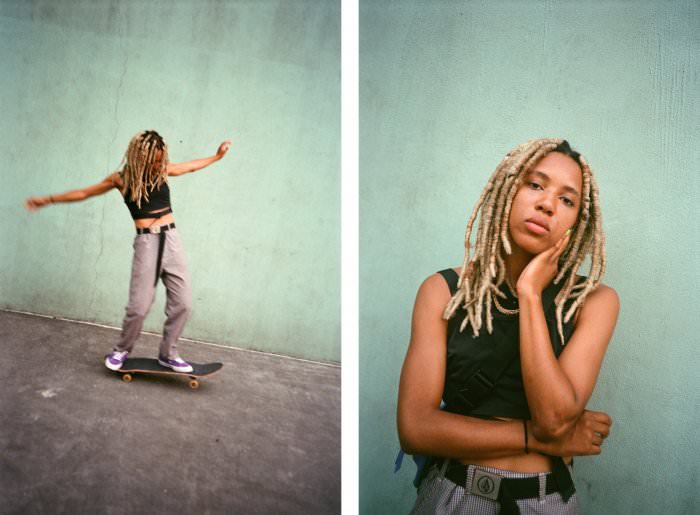 Camille is a character you want to root for. You want to protect her, you want to see her succeed. You feel her freedom as she swerves down the street and her triumph when she lands a trick. You sense the bind that she’s in when she briefly leaves the girls to skate with a crew of boys. In one scene, one of the boys crassly recounts a night out with a girl; Camille is visibly uncomfortable and you cringe too. But in another scene, Camille is out skating in Midtown Manhattan with the boys, evading security guards the best they can. Inevitably, one of them gets his board confiscated, and Camille is the one who manages to get it back from the guard. For this scene, Moselle says she thought, “How could this scenario be different? How could a woman contribute to this situation?” Moselle shows the complexity of Camille’s character. Her docility sets her apart from the boys; she’s able to kindly ask for the board back, apologize, and say this won’t happen again. But as soon as she gets the board back, she runs out to try the trick again. When she lands it and the guards begin to yell and chase after her, you can’t help but feel a moment of victory.

As I speak to Moselle, it’s clear to me that she is more than just the director of this film about seven girls who skate; she’s in important figure in their lives. They call her “mom,” they stay over at her apartment. She’s taken Skate Kitchen from a story about teen girls trying to claim space in a skatepark to a fully recognized skate crew that is inspiring girls, women, and non-binary people everywhere to try what they have long been not welcomed to do. 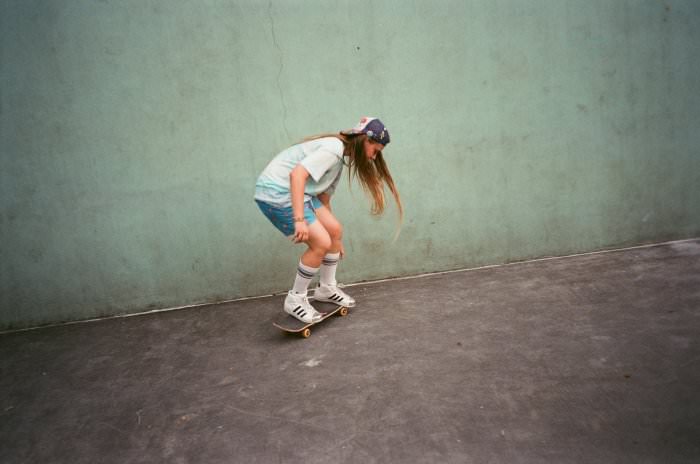 I asked Moselle her advice for young people who want to get into filmmaking and directing. She emphasized the significance of finding your voice. “Making as many short films–like 30-second, 60-second films–as possible to uncover and figure out what your voice is, that is really important.”

A couple of weeks after my conversation with Moselle, I meet her, Moran, and Dede Lovelace (who plays Janay) at a park in lower Manhattan for a shoot. They premiered the film in Los Angeles and I ask how it went. It seems to be a distant memory by this point–she says since LA, she’s been back in New York, and then to Italy.

Skate Kitchen seems like a niche film–for one, it’s about a culture that was once considered to be underground, and for two, it’s about the smaller subsect of girls within this underground culture. But it’s clear that the film has resonated with a much larger audience. They’ve been traveling the world for press–Moselle says they’re leaving for the United Kingdom soon–and I realize that it’s not just young skater girls who have related to the story. 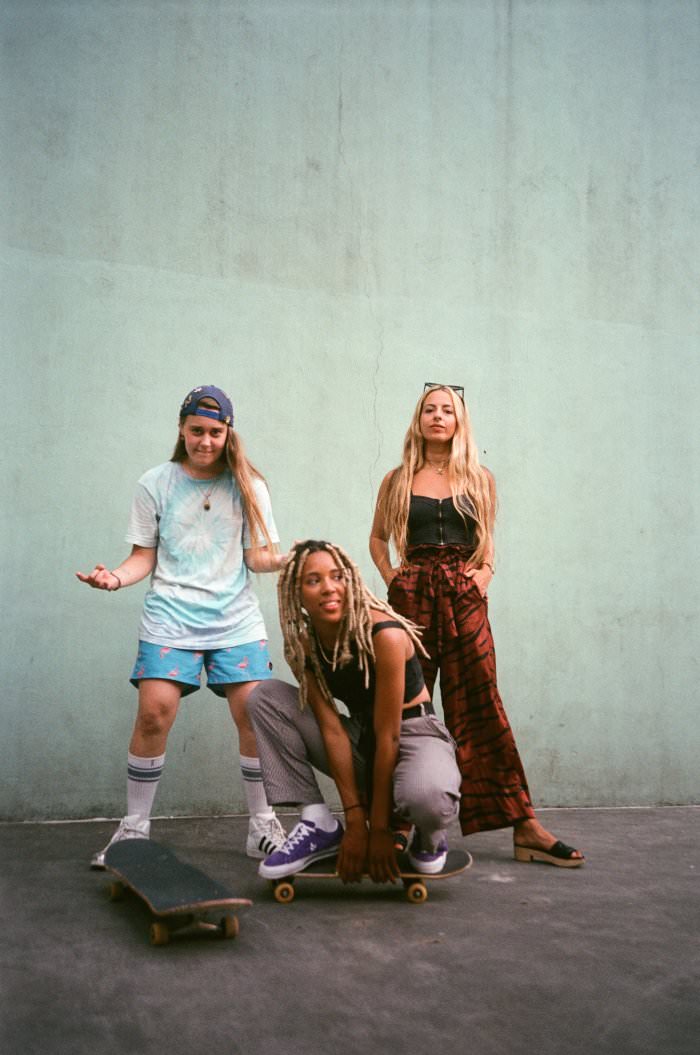 At our shoot, Moran and Lovelace are skating around a fenced-in basketball court, weaving between one set of boys shooting hoops and another set playing handball. A few minutes in, a twenty or thirty-something-year-old guy walks by the park, and from the other side of the fence yells to Moran and Lovelace, “Hey, I know you two! You’re from Skate Kitchen! I love you!” Lovelace seems nonplussed, but Moran yells back, “We love you too!” ♦