“If our mother were to get back on her feet now, her old shoes would not fit her.” 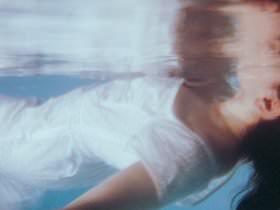 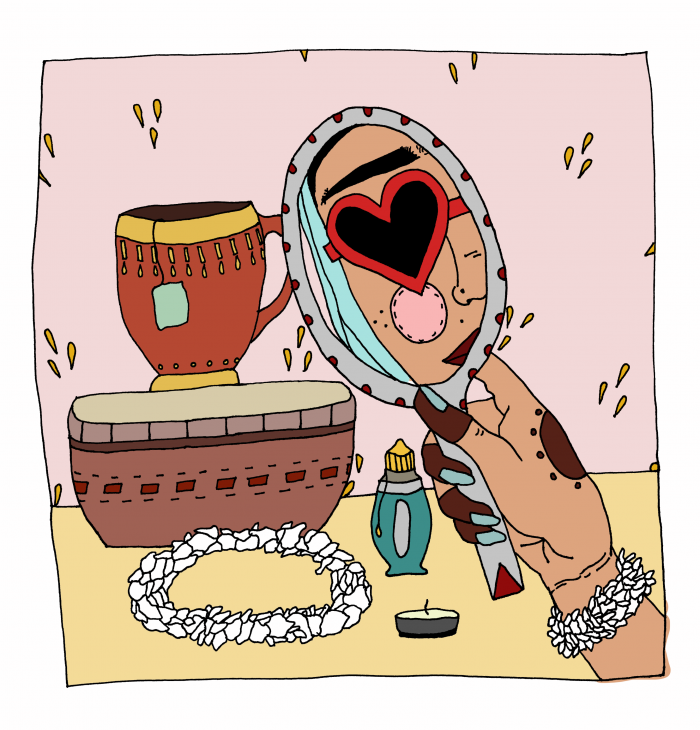 My sister told me she lost all hope the second she realized there were bits of bacon in the pasta sauce. She later whispered to me, as I sat on the counter and watched her fix her red lipstick in the bathroom before dessert, “Bacon is the last straw. The worst Muslims will drink, or won’t pray. They will do it all, but they refuse to eat pork. The second they start eating bacon you know they’re gone. That’s like, the final sin.” We returned to the table and watched our mother, in the process of clearing up, swipe the sauce off the spoon with her finger, and place it in her mouth.

This was supposed to be a housewarming party for us, but it did not feel very welcoming. The new house was filled with friends of our mother’s new boyfriend. There was no one from the circle of my father’s college friends and their family members that had long been part of our social life. “Don’t say anything, Mehroze. Be grateful,” my sister warned. Maryam, who had spent the entirety of the summer antagonizing our mother, was now her defender.

The summer before I was meant to start high school, my mother decided she was done being my mother. After my father walked out of our apartment in Berkeley one night without warning, she sent us to Karachi, to live with her mother, promising it would only be for three weeks, then a month, and then she stopped making promises altogether, ending the conversation before it even began by explaining that her phone plan did not allow for expensive international calls. My grandmother told nosy third cousins and her bank teller at HSBC that the move was temporary, until she could get back on her feet, omitting the fact that during the two months where my mother was supposed to be fixing her marriage, she had quit her job as an ultrasound technician for Kaiser, stopped paying the rent for my childhood home, and moved in with a white man ten years older than her. If our mother were to get back on her feet now, her old shoes would not fit her.

For their last anniversary present, my parents left us. They had us stay with our next-door neighbor for the week and loaned Maryam the Toyota so she could take us to school. The door slammed shut on us, a reminder that Karachi, their birthplace, and their lives before us, was no place for us. They returned home with an entire suitcase full of gifts for us: boxes of Quality Street, shawls, gold jewelry, and artwork for our bedroom walls. They reminded us that they loved us, that they loved each other. They said that we would love Karachi. InshAllah, one day, when it was not so dangerous, we would see it.

The night they returned home, my mother showed us how to fasten the clasps on the matching pink kameez she bought us and reminded us again that she never wanted to move to California. She cried and begged my dad to stay in Karachi, she told us, but he refused. When he brought her to Berkeley, she did not speak to him for four months. My mother had a life in Karachi, but my father was intent on the American dream. Until the end of their relationship, she was too stubborn to let my father forget his betrayal.

She had never been particularly religious, but at one point, when I was eight, she tried making friends with the women at the mosque in an attempt to find a community that could rival what she had back home. Yet after two weeks, my mother pulled us out of Sunday school held in the mornings at Berkeley High, claiming that the housewives running the school were indoctrinating us, and were too self-righteous to teach religion. After, she spent Sunday mornings teaching us how to make chai and telling stories about Pakistan. She told us about the men who sold chaat on the sidewalks, described the sticky summer air. There was a mall that sold kurtees from Khaadi next door to Topshop.

In May, when she packed a bag full of our belongings and drove us to the international terminal at SFO, the biggest shock was that she stayed behind, waving with a slight smile, as we disappeared past TSA and onto the other side. On the plane, Maryam and I watched the city disappear below us and I wondered if it was the U.S. that ruined my parents, or us.

My Nani was the one to greet us at the other end. A 78-year-old woman who lived alone, she had only just retired from teaching Economics at a college for women before we arrived, a job that had been her entire life. During her tenure, she wrote three books, and let her two children raise each other–something she seemed to regret now. It was as though she had learned too late the materials needed to be a mother, and was using us as her make-up test, or maybe a new assignment to keep her busy during the long summer days. In any case, the girls were in Karachi, so she let herself slip into the role and we allowed her, because we did not have another option.

After we moved in, my grandmother would pull out my mother’s old photo albums often, convinced that hidden among the photographs was an explanation as to why she left us. She showed us photos, all of them the same: my mother with lips stained red with lipstick, my mother laughing at a joke, surrounded by three boys, my mother in a short summer dress. A woman who was independent, sure of herself. She told us, “Your mother always said she wanted two girls.” She informed us, lost in the photographs, that Maryam reminds her of my mother, but not me.

I took after my father in every way: broad, with black curls. I have his nose, his poor eyesight, his humor that always pops up at the wrong moments. My mother and sister are tall, have hair that is straight and light brown, and are the constant center of attention. My favorite photo is from their wedding day: my father has his head pulled back in laughter over something his brother-in-law had whispered to him. My mother wears red, with brown hair styled in big waves, and a nose ring the size of my fist affixed to her nose. She sits up straight at his side, eyes down and mouth curved into a scowl. It is the happiest day of her life and she is immortalized as regal, cold, and–for once–just like me.

Nani would refer to Maryam and me as “the girls.” I was in love with it, proud to have our identities so conflated. I was all for losing my identity if it meant I could take my sister’s instead. Only two years separated us in age, but when we were younger, she forced me to call her “Apa” instead of Maryam, a sign of respect she did not deserve, refusing to acknowledge me until I gave in.

Growing up, I used to get upset when my sister was allowed to do something I was not. “If Maryam jumped off a bridge, would you jump off too?” my mother would always ask. “Yes,” I would respond each time, without hesitation. That summer, Maryam never once comforted me, and was still rude, condescending, and superior like always. But my sixteen-year old sister–who wanted nothing to do with me in California–let me follow her wherever she went, and never once said a word.

Our parents had our U.S. passports made years ago, in part for vacations to London and Istanbul, and in part to remind themselves that they could. We had never been to Karachi before. Yet, by looking at Maryam, you could never tell that it was her first time here–she began to speak the language like a natural and learned to navigate the roads quickly, whereas I refused to speak Urdu and found all the streets blending into one made of sand that turned black in the rain. After a few weeks, when she began to get antsy sitting in the house all day, my grandmother sent us to her friend’s house. Her grandson was getting married within the week and preparations were in full swing; women floated around making party favors and choreographing dances for the mehandi that would occur the night before the wedding.

The younger brother of the groom-to-be drinks beer out of a can openly, indifferent to the fact that he is not yet eighteen and drinking is banned in Pakistan. His name is Ziad, and when he speaks, the entire room listens, suspended as he tells a story about how he and a friend were robbed at gunpoint the other night–a common occurrence late at night. They gave the men their new iPhones, money and the fancy wallets that held it–too wealthy to miss them–and left unscathed. Composed, he looks at Maryam the entire time, trying to impress her, and smiling when he does. He drives us home at the end of the day, and comes inside when he realizes my grandmother is not home yet. They walk up the stairs to the bedroom we share and shut the door behind them.

The night of the wedding, Maryam and the boy sit next to me, as my sister keeps her body arched towards me in an effort to include me in their conversation. I do not reciprocate, as I am angry at her for making new friends, and at how easy it is for her to betray me. Instead, I stare openly at the couple seated at the front of the hall: the way they whisper to each other and revel in the fact that they are the center of attention for the night. The bride wears red, with brown hair styled in big waves, and a nose ring the size of my fist affixed to her nose. I watch her all night, noting how she smiles in every picture.