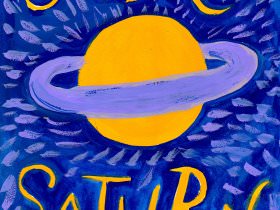 Ask Saturn: How Do I Get Over Imposter Syndrome? 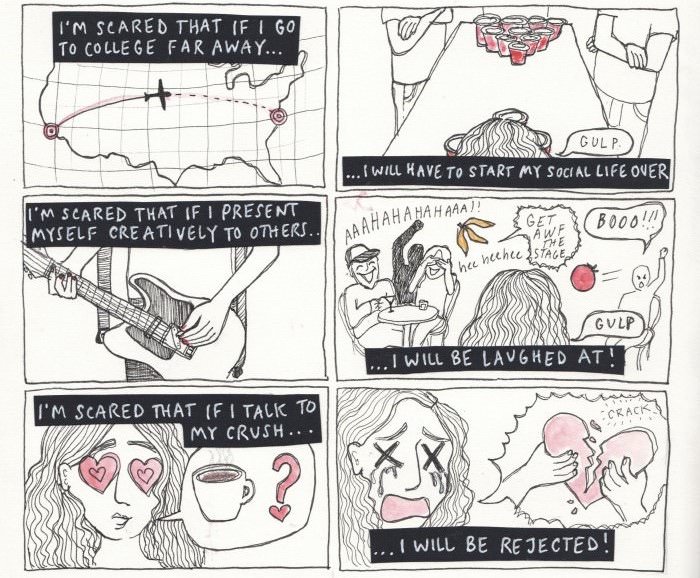 This month, we’re celebrating seven years of Rookie by spotlighting some of our favorite pieces from the archives. In case you need some catching up, we kicked things off by sharing all-star fiction writing, and last week, we revisited the many wonderful interviews from the past seven years. This week: COMICS. This list is full of illustrations you’ll want to save as your wallpaper, advice you’ll want to print out and use as IRL wallpaper, and a bunch of feelings you’ve probably had before, distilled and dissected and made a little easier. So, listed here in chronological order, 55 of our favoritest Rookie comics! 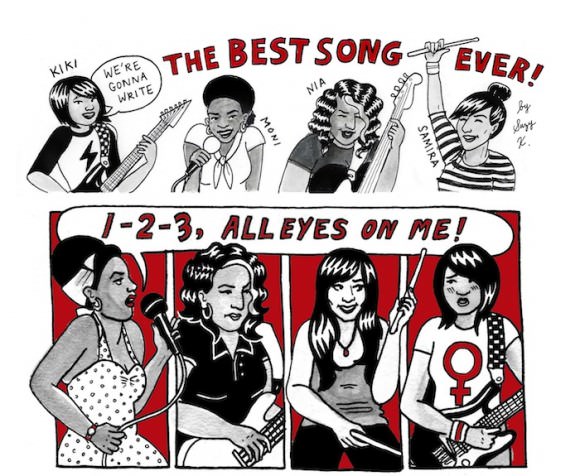 1. Suzy Exposito’s “The Best Song Ever” series follows the life of a fictional (but very real) band.

4. “Learning Difference” by Kendra Yee shows how she navigated the news of a learning disability.

6. And for more ghosts, of a different variety: “Love Story/Ghost Story” by Sonja Ahlers and Marie Lodi deals with heartbreak and hauntings.

7. In “Ev and Betty,” Caitlin Hazell recalls the incredible, fated story of how two best friends became her grandmothers.

9. Jen Berry explains how her perceived psychic superpowers help protect her from her own imagination.

10. Sandy Honig and Margalit Cutler tell the story of a character who collects her tears in jars. 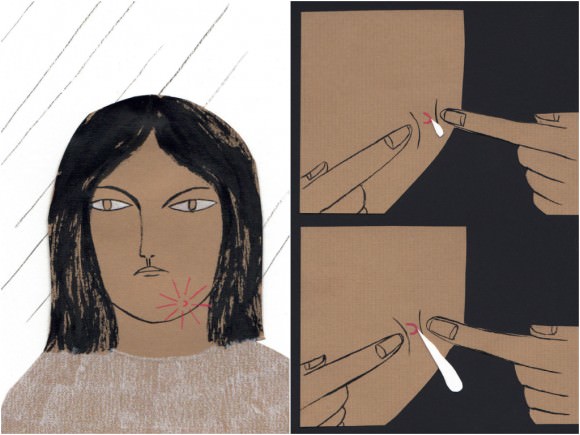 11. Kaye Blegvad’s “Out, Damned Spot” is a love story about a girl and her zit.

12. Rachael Prokop and Emma Dajska beautifully illustrate the secrets of the ocean.

13. Emily V. Gordon and Esme Blegvad are here with a primer on how to handle situations that scare you.

14. Teenboystuff captures the plight of having natural hair on the job.

15. Kendra Yee and Pearl illustrate the challenge of reconciling one’s self-concept before and after sexual assault.

16. Margaret Machlan asks (and answers!) the age-old question: How can I make a difference when I feel so small?

17. Allyssa Yohana a.k.a. Yr Pal Al a.k.a. her occasional alter ego Evil Al has shared many nuggets of wisdom in comics form, but today we honor Dear Dairy: a diary (or dairy) entry about feeling like a bug.

18. Ola Szmida’s animated comic, “Undercover,” is all about being invisible but not disappearing.

19. Annie Mok and Jack Gross tell a story of allyship in the face of bullies.

20. Kate Gavino discusses the legend of sanpuku, family, and superstition. 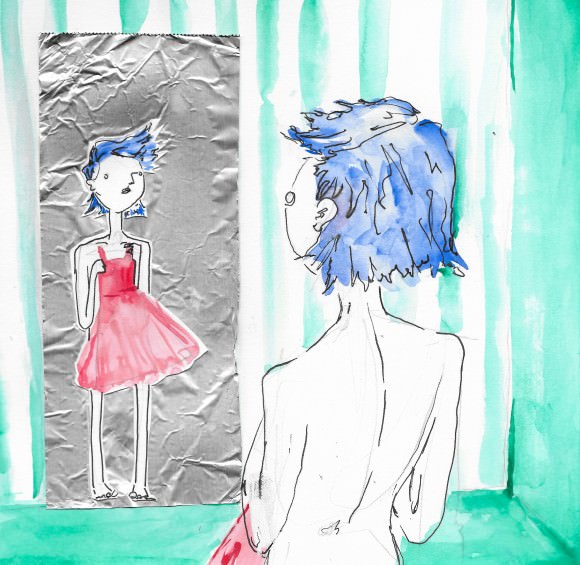 21. Hunter Schafer shares her experience defying gender dysphoria in the sanctuary of her sister’s closet.

22. Allegra Lockstadt and Leigh Luna offer their advice on dealing with catcallers.

24. Sarah Rimington teaches us how to come to terms with friendships that change.

25. Ellie B. details her experiences with OCD.

27. Andrea Galaxina explains how the movie Twister sparked her obsession with tornadoes.

28. Maggie Thrash feels breakups hard and learns a lot about self-worth in the process.

29. Esme Blegvad’s epic story about her relationship with self-harm will remind you that you are not alone. 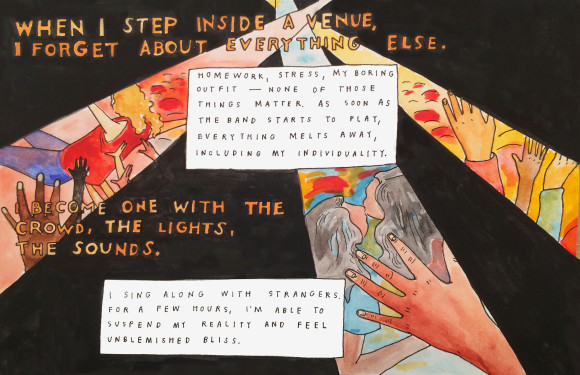 31. Shriya Samavai and Clare Drummond depict how zooming out on yourself can help you understand your place in the world.

32. Matthew James-Wilson makes a convincing argument for being vulnerable with the people around you.

33. Rachel Davies takes us through the excitement and anxiety of sharing creative work online.

34. Corrinne James maps out the annals of the internet.

36. Patrick Ferris talks about why you are already your own soulmate.

37. Sunny challenges the idea of soulmates, and whether two people can really be “made for each other.”

38. Stella Harvey grapples with the anxiety of leaving for college and saying goodbye to her BFF, and teaches us how to keep long-distance friends.

40. Lucia S. celebrates the irreverence and absurdity of online quizzes. 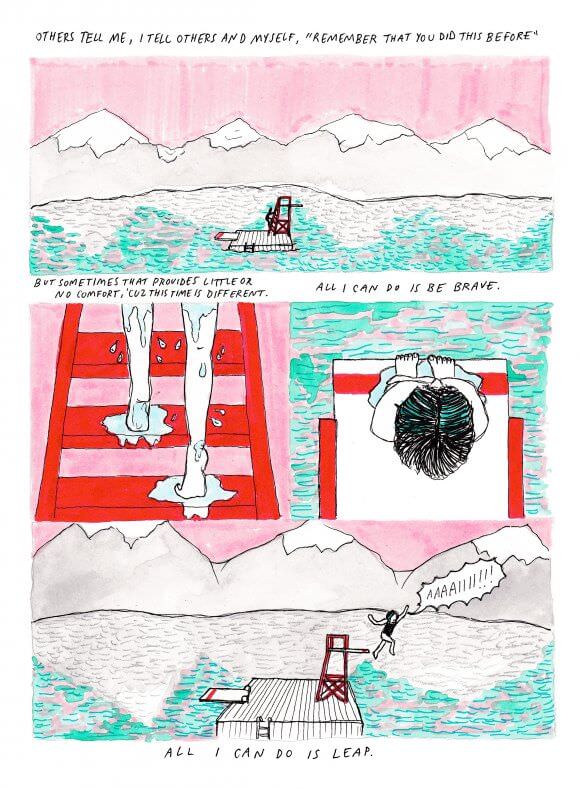 41. Stephanie Kuehnert and Esme Blegvad have a conversation about creativity and mental health.

43. Leigh Luna captures the importance of community in the wake of the 2016 election.

44. Isa Garcia sings the praises of trusting your gut.

45. Elly Malone makes her inner critics less intimidating by getting to know them a little better.

46. Isha Khanzode tells a story of vicariously living on the edge.

47. Emma Dajska splits up the souvenirs of a relationship.

50. Get in touch with your flora alter ego with Isabella Acosta’s “Meet the Plants” series. You can find part one here and part two here. 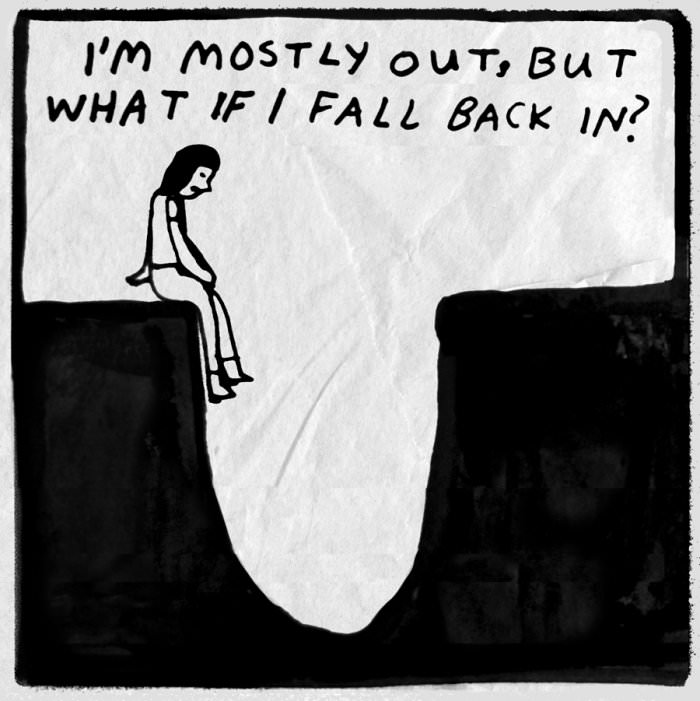 51. “The Pit” by Kelly Abeln is a comic about the cycle of recovering from our lowest points.

52. Vatsala Manan explores ideas about time and love in “Caves of Nostalgia.”

53. Alia Wilhelm introduces us to the world of lucid dreaming.

54. “Worldbuilding” by Isabel Ryan visualizes what it would be like to invent a new universe.

55. Ramisha Sattar meditates on what it’s like to feel stuck in the past. ♦