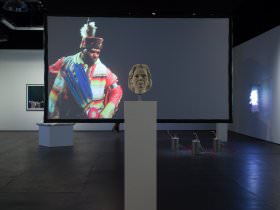 Say Your Truth: An Interview With the Curators of the Racial Imaginary Institute

The classic demo is an artifact of hauntology. It’s a sign of presence behind the songs we’ve heard a thousand times on the radio. The ones we’re told are the best of the bunch, the greatest ever, the songs we assume sprung into this world fully formed like Venus in her shell. But listening to these demos we find less of a birth than an anti-birth. Krist Novoselic once described the horrible sounding guitar solo on the initial mix of “Heart-Shaped Box” as like an “abortion hitting the floor.” It’s easy to use the rough copy recordings as further proof of these musicians’ classic status, especially when every sneeze and snore of canonized musicians like Kurt Cobain are available in gold-plated boxsets as proof of their genius. But I hope in diving a little deeper, and making these familiar songs unfamiliar–and in some cases, even a little ugly–we can realize that perfection is a process with lots of nervous rehearsals and “are we rolling?”s on the way. ♦

19. “Frankly Mr. Shankly (demo with trumpets)” by The Smiths