Speak Your Fears Into the World: An Interview With Bo Burnham and Elsie Fisher

The director and star of the movie Eighth Grade talk about the internet, acting, and growing up with anxiety. 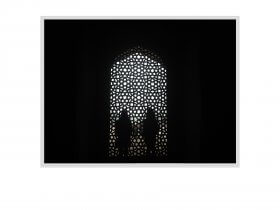 Elsie, how much did you think about the internet before the movie? Did your thoughts or feelings about it change when you were performing the act of scrolling on your phone in front of a camera for ten minutes?

Elsie: Yeah, I didn’t think about it much before the movie I guess. I want to say that after the movie my relationship with the internet changed, but it really didn’t. I now just think about it and that is all that changed. When I was scrolling in front of the camera, I just tried to disconnect and pretend the camera wasn’t there. I guess that’s what you do in every scene, but I was actually on my phone. It’s the greatest tool an actor can have if they’re going for that thing because you can just lose yourself.

Bo: That’s why we wanted the real internet. There were no screen replacements or anything. We’re actually shooting the internet, because the look on your face is different when you’re actually scrolling! Also, it was very close on her. When she’s scrolling you can actually see her eyes very suddenly do the little vibration. You see kids [in movies] surf the web like, [miming dramatic button-pressing] “LIKE!” As opposed to the real thing, which is just [deadpan] “ha ha ha ha ha.”

Bo: In the darkness, with the light of someone’s phone on their face, is a weird, very beautiful, cinematic sort of image. I don’t know why the internet can’t be considered cinematic. It’s a light source!

What do you each hope that a Kayla-esque 13-year-old girl watching it would come away with?

Bo: Yeah, just go easy on yourself. Nothing has to get fixed now, things will be OK, and if they’re not, you’ll learn how to deal with things that aren’t OK. I think by the end of the movie, she’s able to be a little forgiving of herself, because the culture’s not going to forgive you. We look to the culture so often for [validation]­–there’s that Terence McKenna [quotation]: “Culture is not your friend.” Also, maybe just speak your fears into the world. I learned that when I was 25, that to say it out loud is the solution to it. Just to speak what you’re worried about is very, very helpful.

And to name it.

Bo: Name it! Exactly. I didn’t name my anxiety literally until I was 23 or 24. I was in the hospital around [eighth grade], because I thought I had stomach problems because I was just on the toilet every day of my life, and then in ten years I was like, Oh, I was just super fucking nervous. So Kayla’s ahead of the game for me. I really admire her, and Elsie specifically in the performance is able to express something I spent ten years trying to express.

Re: “culture is not your friend”–so I owe a lot of my life to the internet, and when I was younger I thought that anyone who was worried about Twitter was like the grandpa from The Simpsons, and I was like, “Shut up!” And now I’m like, Oh shit, wait, this might be very­­–it’s good and bad. But any time I try to write about that, someone will be like, But the internet is how I’m reading this now!

Bo: It’s everything. It’s overstimulating, it’s numbing. We’re hyper-connected, we’re super lonely. Black Lives Matter, Trump. Both things! It’s giving visibility to people who never would have had visibility ever before. It’s keeping people accountable who have never been held accountable. And we’re kind of miserable, and the country’s on fire. My issue is that, to have a conversation about the internet, the only place we have conversations is on the internet, and do you think the internet might have a vested interest in not having a critical conversation about itself? I’m just the first person [making a movie about the internet] who the internet actually means something to. So far, it’s been people trying to portray this thing that their kids are on and that they don’t understand. So I’m excited to see it being talked about more in more subtle ways. It’s very funny what people think the drama of the internet is, like: cyberbullying, Russia, and pictures being sent to wrong emails. Like, no, the problem with the internet is indescribably subtle and I just go to bed at the end of the night and I have a nervous stomach for no reason and I don’t know why.

In the movie, we’re just trying to present our feelings–both of our feelings­­­–and say, “We’re confused. We’re unsure of what this moment is.” I always say when [Elsie] becomes a social scientist in 20 years, I’ll be happy to read her dissertation on it, but really, as of now, I just think our job is to take inventory of it emotionally. And I say culture is not your friend, but it can be your friend, and I mean this. The solution will be humanity in tech, and young intelligent people actually Trojan horsing some values into this piece-of-shit thing we have.

Everyone has their own relationship to the internet that’s almost like a relationship that you have with another person, and in the movie, you feel that this is one of the central relationships in Kayla’s life.

Bo: Yeah, and it means something to her. Elsie, what is your actual relationship with your phone?

Elsie: I mean, I use it more than I should, but–it sounds crazy, but I feel like nothing without it. I’m deeply attached to it because I am a kid, and I do stuff all the time without my dad, so it’s like, if I don’t have this, I am back to a kid. This makes me feel more mature, and safe! It’s a safety net for me.