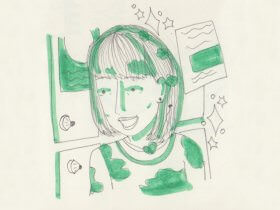 My mom and I have always had a tumultuous relationship. I know mother-daughter relationships are always intense, emotionally-charged things, but I think ours was especially combative. This contention wasn’t just something that sprung up as a side-effect when I turned 13. I have memories of heated debates with her dating back all the way to my early elementary school days. Our fights were simply woven into the fabric of our daily lives together.
Now, I feel that it’s important that I preface this anecdote with the two integral characteristics of mine:

When I feel any emotion that puts me beyond a neutral state of being, I cry. Happiness, frustration, sadness, anxiety, excitement—it all sets off the waterworks.
Not to be a cliché, but I would describe myself as emotionally unavailable. Most likely the side-effect of an unamicable divorce, it’s hard for me to register and convey my own emotions. Indeed, it’s a weirdly unsettling experience when anyone takes my emotions into consideration—one that will probably result in me surreptitiously hiding tears.

There was one fight that stands out amongst the slew of others. I was sixteen (one of our most contentious years to date) and we’d been going at it for probably half an hour or so. Our fights tended to follow a formula. For whatever reason, they would always happen in the late evening; there would be an intense back-and-forth, before she would really go off on me, and then she would act like the argument was over, leaving my room with a note of finality, going to another room for a few minutes to think up further objections, and come back to perpetuate the argument with a refreshed supply of ammunition. On this particular evening, the key moment came right as things began to come to a head. We were fighting over who-knows-what, but it was a serious one, and as I do when I get very frustrated, I started to cry. My whole crying habit is something that annoys my mom to no end. Immediately, my mom called me out for this, believing that I was faking the tears for dramatic effect, which of course, made me more frustrated and caused even more tears to fall.
I remember responding to her disdain by telling her, “I’m allowed to have emotions. I’m allowed to feel things.” I remember saying this was a big thing for me. I was telling myself just as much as I was telling her. It was a moment of extreme vulnerability, because I don’t think I fully believed the words I was saying. It was as if I was waiting for my mom to confirm or deny this suspicion of mine, and deny she did. She shot me down and repeated my words back to me in a high-pitched voice, mocking me before writing off my declaration altogether with a scoff.
A few months later, this interaction had fallen to the back of my mind, still in my memory, but starting to melt away. Also a few months later, during yet another classic evening dispute, I was getting frustrated with my mom about some new subject of debate. I remember my face was already tear-soaked when, suddenly, she started crying too. Without any instigation from me, she proceeded to tell me, without any sarcasm or inflections of irony in her voice, with absolutely no recollection of this previous incident, “I’m allowed to have emotions. I’m allowed to feel things.” I didn’t tell her that she had just unconsciously parroted the pleas of her teenage daughter à la four months ago. I just sat there, a bit in shock about the fact that two people, forty years apart, could have the same need to defend our existence as emotional beings.
It didn’t even make me mad to hear her plea for the very thing she mocked me for saying. All I could feel was sympathy. I say this in the least arrogant way possible, but I became bigger than my mom, at least for that moment, as I allowed myself to understand her. Because when she was mocking me, it wasn’t out of hatred, not really, at least not a hatred toward me. That whole interaction wasn’t about me, it was about her. Something about it triggered her and it was clear she was grappling with her own emotional shortcomings. I also knew firsthand how shitty it would feel if I refuted that remark and let it go invalidated. In that moment, I felt like I was the mother, humoring her daughter, while having a sort of omniscient viewing of the present situation.
I think becoming an adult would be the wrong way to put it. I still don’t quite feel like a proper adult. It was closer to ceasing to be a child. It was a poignant moment that solidified my view of my mom as a person rather than my mother. I’ve always been more on the introspective side, but this was the first moment I can point to, where at the end of it I felt properly mature. I mean, I’m all about being right; I’m someone who has longstanding disputes about things as inconsequential as the correct way to pronounce Ricky Gervais’s name (he’s not French—please say the “s”) and who, if I believe I am right, will fight these battles until I see you put up that white flag. So, ceasing to need to be “right”, giving someone else that moment to feel a superior degree of justification exists in their beliefs and statements, and letting go of my own opportunity to justify my own former statement—well, it was a serious landmark for me in my journey to adulthood. Because, in the end, I can’t remember what either fight was actually about. Whether or not I was “right” in either of those arguments is something that has been completely forgotten. But I do remember the first iteration and my mother’s later reiteration of those words. In what was probably a cumulative two hours of arguing, that’s all that ended up having any relevance to my understanding of people and life, and thereby, my happiness. I realized that being right and being happy are not the same thing. Sometimes you have to let go of that need to trump someone else; even if you feel like you have the trump card, you don’t always have to play it. Sometimes it’s better to just see how the game plays out without it.