Illustrating friends with their dream superpowers.

We were interested in seeing how our friends would want to enhance their lives without the limitations that reality provides. It’s an interesting question to consider: if you could have any ability, what would you chose? We wanted to make these powers possible through photography and illustration, to make an alternate little world where we’re all superheroes. 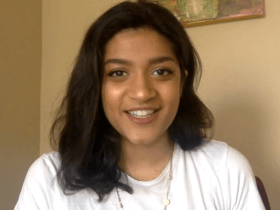 Upasna Asks: How Do I Talk About Social Justice Issues?