“No one around me in real life knows I do this.” 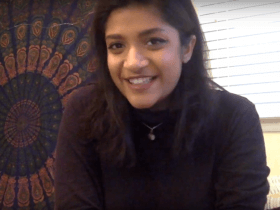 Upasna Asks: What Are You Doing With Your Life?

KSH, 18, ASTRO ENG Updates, Washington D.C.
Group: Astro
KSH is one of the many individual translators online. She, like many other fans, started liking Astro a few months before they debuted, when she saw a video of them playing around and dancing while cleaning their practice room. She’s starting college for Visual Arts this fall.

Are you a native Korean speaker?
My parents both grew up in Korea and came to America before I was born so I grew up speaking Korean in my house and didn’t even learn English until I started preschool. As I got older I stopped speaking Korean, unless I’m talking to my grandparents, but my parents still speak it at home so I understand fluently. I actually didn’t know how to read/write in Korean until probably middle school when I taught myself over the summer.

When and why did you start publicly translating for Astro?
I had an account before they debuted and planned to just use it to follow Astro and some of my friends but I started translating some tweets as their debut got closer. I didn’t see many other accounts translating for Astro so I just changed my whole account into a translation account.

Why did you decide to support and translate for Astro instead of any other group?
I just liked their silliness in the beginning and then watching their seriousness in practice videos made me feel like they had the potential to become big. At the time I found them, they were still pre-debut, so I just figured I might as well keep supporting them and translate so any foreign fans can learn about them.

How do you set aside the time to translate and post given the responsibilities you have IRL?
I try to translate as soon as they tweet. It’s fun for me because it’s like a distraction from homework and since each tweet is only so long it doesn’t take much time.

Do you have any interesting anecdotes from the years that you’ve been translating?
When Astro came to D.C. on their Global tour, I got the chance to meet them backstage. My mom came along because she wanted to see them too, and she told them about the account, which was pretty embarrassing, but the members thanked me. I remember JinJin saying as I left, “앞으로 도 잘부탁드립니다,” which means “please continue taking care of us in the future.”