“Sometimes being around other people is just too much.” 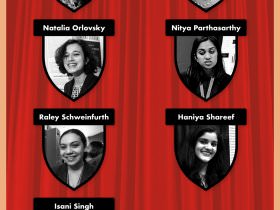 Dispatches from the Ultimate Science Fair

We outlast the office workers, the professors, our own classmates. Late-night baby scientists sitting around a table, whiteboards painted with equations in black and red and blue. We laugh more and more as the clock ticks towards midnight and it echoes into the looming emptiness of the building. Other students pack their bags and meander back to their dormitories, but we remain, classical music playing softly from someone’s laptop, numbers and variables practically bursting from our skin.

I’m not always happy there. Sometimes the laughter is as much despair as it is hilarity. Sometimes being around other people is just too much, and I retreat a few tables away, clamp my headphones around my ears to block out the raucous group. Sometimes I’m giving a mini lecture on damped oscillators or nondimensionalization and the onset of my raging headache is so sudden it’s like a knife driven through my brow bone. But I can’t pull myself away entirely. There’s too much to do.

I apply for internships for the summer. Research positions like the one I had last year. It’s expected of me, now, a department full of professors and students alike watching my progress like hawks. My advisor asks me every day if I’ve heard back from any of them and every day I tell him no. I get one rejection and one waitlist notification and not a word from the other ten I applied to, while my classmates get one or two or three offers, each name more prestigious than the last. I have a backup. I’ll stay on campus and work with one of the professors here. But no matter how much I do achieve, there’s always this sinking feeling that I’m not making par, that I’m not excelling enough to stand out when I try to take my next steps in the world. Grad school. Academia in general. It’s as if the more I accomplish, the less qualified I feel to continue.

I don’t have a way to combat this yet. I know where I feel the most at home: in the observatory, the telescope huge and columnar and constant, whirring away as I take my images. But also: in the electronics lab, lacing together circuits with colorful wire and blocky capacitors. But also: in my linguistics class, standing in front of a room talking about stress systems and pronouncing nonsense words from the language we’re constructing. But also: in the room where the mathematics TAs hold office hours, teaching students a shortcut to solving certain differential equations that their professor skipped over but I know from my own physics background. But also: in the dining hall, doing crosswords with my friends. But also: my dorm room, bedspread from home, postcards from my parents on the walls. But also: the very table in the physics wing where laughter can be mirth or desperation.

All I can do is tell myself that I belong wherever I go and hope that I start to believe it. ♦