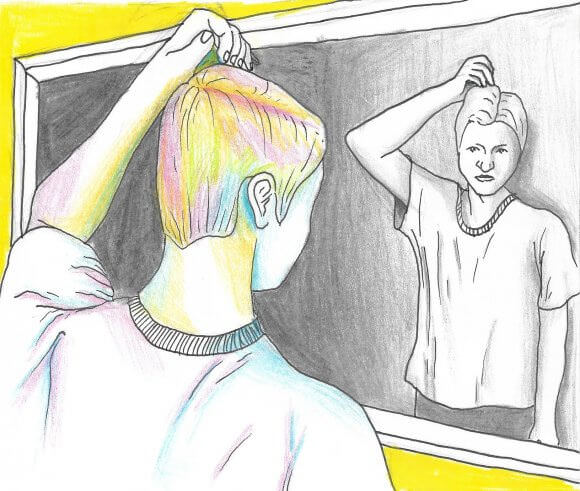 When I was in elementary school, my favorite pastime was to dream up visions of myself in a huge home with a pool, everything spotless and clean. Most kids want to be some sort of superhero, to possess telekinesis or the ability to fly. But what captivated me seemed beyond supernatural. More than anything, I wanted to be skinny. In every fantasy I had, it seemed that my stomach fat had evaporated into thin air.

In my perfect world, my body was slim and tan and had shed itself of my freckles (which my peers often mistook for chicken pox). My body was a Frankenstein-esque mashup of Zack Morris’ body and my face. It was the opposite of my young, pudgy body.

Fortunately, I have grown to love my body, and I can look back at my days of self-hatred in reflection instead of relation. I always ask myself why I hated myself as much as I did; how I ended up in such a predicament at such a young age. I’ve even hated myself for hating myself. But the more I unpack my self-hatred, the more I realize these ideas were cultivated by years of third-party fatphobic influencers.

For starters, most TV shows and movies I’ve grown up with only feature skinny protagonists. We rarely see fat or chubby characters, and when we do, their weight is their standalone trait, ostracizing them from their peers. They don’t get to have beautiful and loving partners. They’re the butts of jokes. I was taught that fatness never equated to beauty, and that the most a fat person could amount to was a laughing stock. Take Rebel Wilson’s character from Pitch Perfect, who introduces herself as Fat Amy so that “twig bitches like you don’t do it behind my back.” This could be seen as her reclaiming a word typically used as an insult, but if fat bodies were as normal in film as they are in real life, there would be no need to justify them in the form of comedy. Melissa McCarthy spent years getting typecast as an ill-mannered, messy person whose weight is played for laughs, and as she’s proven she can draw crowds at the box office, she’s gotten to show off more of her acting range. But as a fat leading woman, she is an anomaly.

These teachings extended far beyond the media I was consuming. Even my best friend in seventh grade told me that I was the less attractive one between the two of us because I carried most of my fat in my stomach. Last year, at my annual skin check, my dermatologist asked me if I was “bothered” by my stretch marks. There are times when it feels like fatphobia is everywhere; like it’s sneaking into my TV at night, or hiding in the brains of my friends and teachers. Sadly enough, it sort of is.

When it isn’t socially acceptable to serve fatphobia in the form of explicit shame, it’s disguised as concern for my body. In middle school, my gym teacher gave me loads of sympathy about my weight and undermined my ability to do well at any physical exercise. We were regularly required to run a mile as an assessment, and assigned partners to count our laps. Though my average time was the same as most of my classmates, my teacher constantly checked in with my partner, and no one else’s. He often singled me out while we were all running, yelling from across the gym, “I’m so proud of you, buddy!” What sounded like encouragement was coded with prejudice: He never said such things to my slim peers who performed at my same rate.

The forces of fatphobia haven’t changed, but I have. In eighth grade, I began talking with a therapist about my struggles with body image. I told him all of the little anecdotes and conversations that chipped away at my self-esteem. Telling these stories over and over again and being asked to think about how they affected me made me realize that I hated myself because my environment told me I should. It’s not as simple as recognizing the toxic things in your life and instantly cutting them out, but it is as simple as knowing there are better things out there and that you deserve them. I then saw that being friends with people who viewed me as lesser because of my body was not obligatory, but optional. Watching and viewing media that shamed people for their fat bodies was also optional. And while fatphobia is everywhere and being faced with it is inevitable, you can consciously decide who you communicate with and what media you consume.

This realization was fundamental for gaining confidence in my body. I cut ties with the people who made remarks about my body being less beautiful than theirs, and sought out classmates who were informed and respectful. I stopped watching shows that only cast skinny people as protagonists, or only cast fat people to make jokes out of their bodies, and replaced them with shows like Insecure or Drop Dead Diva. I started following body-positive Instagram accounts like @resin_lips or @fatkyliejenner.

I found myself walking away from fatphobia as opposed to waiting around for its next jab. I walked toward the people who would become my greatest friends, and toward media that uplifted my body instead of putting it down. I saw that skinniness is not a superpower, and that every body is its own superpower. And that, in a perfect world, I would look just the way I do now. ♦