A comic about taking fate into your own hands. 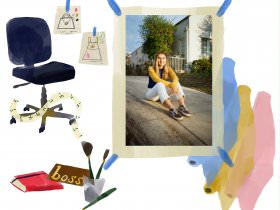 Be Your Own Boss: Aza Ziegler