The premiere of the duo’s nostalgic new video. 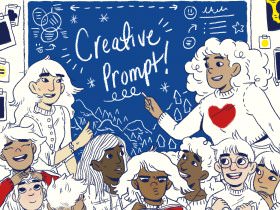 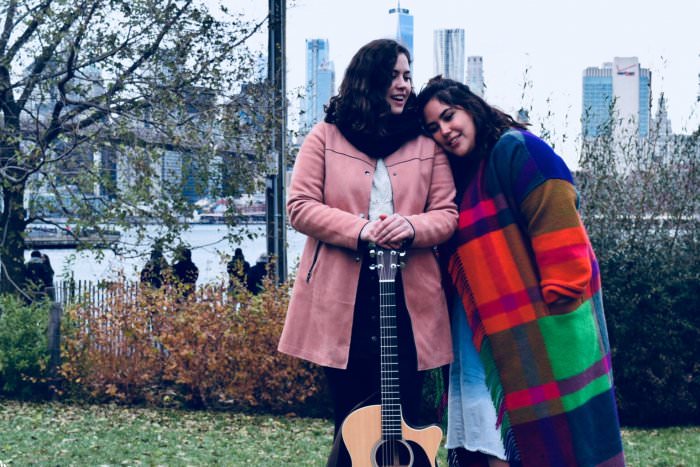 King Willow’s music feels like the sonic embodiment of a sunny day. Saccharine yet not insubstantial, sisters Amanda and Julianna Salguero beautifully combine folk-storytelling sensibilities with a glossy pop finish, creating tunes that are both bittersweet and catchy. Today, we’re premiering King Willow’s new video for “Selfish”, a nostalgic and chaotic craft-project of a dream that perfectly pairs with the song’s mix of melodic vocals and self-critical lyrics.

I chatted with Amanda and Julianna this month about dolls, self-care, and how to draw inspiration from depression in a healthy way.

ANNA WHITE: We’re premiering your video for “Selfish”— it’s a beautiful video! What was your inspiration?

JULIANNA SALGUERO: Thank you! We initially just wanted it to be a simple lyric video, and it kind of got out of hand. We got the dollhouse and DIYed pretty much everything on it, and it just came together into this big mess of a craft project, which is our favorite medium to work in!

I love that! How long did it take you to put that all together?

AMANDA SALGUERO: Actually, the whole thing happened almost entirely in just the couple days that we shot the video in. We had about two days that we making crafts, and then we shot the video over a three-day period where we were just staying at our director’s house. We were just waking up, working, making the crafts for the scene we were about to shoot and then picking up and doing it all over again. It all came together a little last minute, but it ended up good!

Where did the idea for the dollhouse come from?

Julianna: First of all, I just love dolls, I’m going to say it. I love dolls, and the aesthetic just kind of fit perfectly because the song is about growing from child to adult, and that kind of late-teens-early-twenties where the lines just disappear, and I thought something that kind of pulled that image is the idyllic dollhouse, but with all the chaos happening inside of it. When we found the pink dollhouse on Craigslist, we kind of knew it was perfect for the video. Everything kind of crystallized and we could picture the video in that dollhouse.

That’s so perfect! Were you just looking on Craigslist for inspiration, for props?

Julianna: Yeah! I was looking at a bunch of miniature doll Instagrams, which there are thousands of. People make accounts of perfect living rooms, all miniature sized. And I picked up the dollhouse from a family in the city in the middle of a huge rainstorm, super dramatic!

Did you grow up with a similar dollhouse?

Amanda: We actually did have a pink Barbie dream house. I don’t think you can actually see it in the video, but there’s a little clip of us as kids playing with dolls at the end of the video, and we were playing with a pink dollhouse not dissimilar from the one in the video.

Tell me more about the song itself—you said it’s about growing up?

Julianna: Yeah! I had maybe the most chaotic summer of my life the first summer after my freshman year of college. Freshman year turned out to be my only; I had a lot of issues with depression and anxiety, and I ended up getting kicked out of school, I failed. And so my parents found out about that, and then maybe two weeks later I took my dad’s car out and I skidded into a guardrail. It was the worst moment, where I was feeling completely selfish for thousands of reasons, and I just kind of sat down at the piano and started writing about it and it turned into a general apology to a lot of people in my life, kind of cathartic in that sense. But it still makes me feel so shaky and vulnerable when we sing it today, because it just takes me back to that exact feeling.

How many years ago was this?

Oh man! How do you think your feelings have evolved about it now that some time has passed and it’s less immediate?

Julianna: Honestly, I’m pretty glad that it happened. I didn’t end up going back to school, I stayed at home and I worked on music, and Amanda was at school at Barnard which is really close to where we’re from, so I would just go and visit her and write music, and then we ended up moving out to California together! And I never would have done any of that, or made music as much a part of my life as it is, if I had stayed at school and been not as happy, so it had to happen.

Do you think the move from East Coast to West Coast impacted your music?

Julianna: Yeah! I think that the move definitely did, because before I was writing a lot out of depression and anxiety, living in my parents’ house at my minimum wage job and feeling stuck. My dad actually asked me before I moved, “Are you worried that if you start to feel better and feel heathier you won’t be able to write as much?”, which is a scary question that I asked myself. He was asking because he was worried I would say yes, but I said no, because I think that you can get inspired from an array of emotions, and I still am inspired by my anxiety and depression but the way I write about it now is I think with a lot more clarity than I used to. I like to write in a way that feels relatable and not too end-of-the-world about it; it’s something that I live with and I deal with and I know a lot of other people do too, and it’s something you can manage.

That’s such a healthy way of thinking about it. I feel like a lot of times artists want to hang on to their sadness; it’s easy to glamourize depression as essential to creating, but viewing it in a healthy way is so important!

Julianna: Sometimes it’s hard to talk about it without it seeming romantic or glamorous or any version of that. But it’s not something you shouldn’t talk about! It naturally comes up when I write, and so I hope at the end of the day people are left with the right message! It’s definitely not glamourized in our music video—it kind of shows the house at different points of disarray, but then towards the end there are all these flowers and things growing out of the destruction, and I think that’s kind of the piece of mental health that I do like! Making the most of a situation and turning it around however you can.

Tell me more about the flowers! What do they symbolize?

Julianna: I think it’s about healing—learning how to self-care and communicate. That’s pretty much what I did instead of go to college! I learned how to do those things really well, and I think that that’s important. It kind of symbolizes the regrowth, how when you’re spiraling you can un-spiral.

Self care is so important! If you have one more piece of advice for Rookie readers, what would be your words of wisdom?

Amanda: I think the best advice is just open yourself to opportunities and don’t be afraid to say yes to them. That and staying involved in whatever community you want to be a part of, just finding a way to get in through the front door! The open-mic scene is how we met everyone we know in music out here! Sometimes just showing up is enough.

Julianna: I think my number one piece of advice is that if you don’t see someone like you doing something, sometimes it makes you feel like you can’t be doing it, but that’s the reason you should do it! If there’s no space for you, make space for yourself. That’s something I think a lot of people in general struggle with, but I think it’s the worst for young women. I never thought music would be something I could actually pursue, but you kind of just have to say, “Yes I can!”. Fake it till you make it! ♦