Why Can’t I Be You: The Producers of The Florida Project

An interview with the women behind one of 2017’s best films. 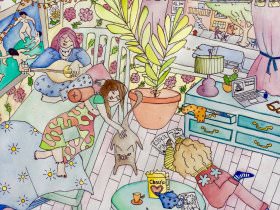 What is the most challenging aspect of being a producer?
Samantha Quan: The most challenging part is keeping your energy up and keeping any doubt at bay.
Francesca Silvestri: Figuring out how to make it all work within a set amount of time and budget. Managing all the different personalities and opinions with care.
Shih-Ching Tsou: To make sure that all of the political and practical aspects of the shoot run smoothly, so the director can focus on storytelling.
Dani Johnson: Maintaining a healthy marriage between the business and the art. One cannot exist without the other when you are creating a film with the intention of it becoming widely influential, or whatever you deem as “successful.” It takes an incredible amount of trust, communication, and mutual respect to achieve common goals and visions. At the same time, that challenge is also what draws me to filmmaking. I enjoy solving problems and creating common denominators for people to create more efficient and productive working relationships and environments.
Alex Saks: Depends on the day. It’s all challenging. It’s problem-solving and personality management and using your intuition for forethought. Predicting the future would be a dream skill for any producer, I think.

And, the most rewarding?
Francesca Silvestri: Taking an idea from inception to fruition and seeing a story come to life. Meeting and working with talented people from all over the world is pretty exciting, too. What is so rewarding about working with Sean, in particular, is his films’ ability to really touch people and get them to think differently, with a more open heart.
Samantha Quan: The most rewarding part (in my opinion) is getting through each day—meeting both the challenges and joys. The process is so rewarding.
Shih-Ching Tsou: Seeing the film getting into top-rated film festivals, receiving good reviews, and hearing positive feedback from the audience.
Dani Johnson: For me, the most rewarding aspect of producing is the people I meet and connections I make. I am constantly learning and growing, both as a producer and as a person, solely from the relationships created through the filmmaking experience. Any time crew members have reached out to say what an incredible experience they had during the production of a film I’m on, that has got to be the most connected I ever feel to my passion and purpose.
Alex Saks: Making audiences feel something—good or bad. Connecting with humans and connecting humans to other humans is what gets me out of bed in the morning. I believe that people are hugely complicated, but ultimately good and malleable beings. Change is possible. So any part I or we can have in the precipitation of that change is thrilling.

As of 2016, women comprised nearly 24% of producers in Hollywood. Given the precedent, who or what inspired you to become a producer? Who did you look to as an example?
Francesca Silvestri: My father inspired me. He was a doctor in Rome during La Dolce Vita and knew everyone in the film world. He would take me on sets and trips when he had to visit an actor or director. I grew up meeting the most incredible people. Initially, I looked to producers like Dino De Laurentiis, and then to women like Kathleen Kennedy and Laura Ziskin.
Alex Saks: I think I always wanted to tell stories, but I knew I wasn’t going to write them. And I certainly wasn’t going to direct them, so producing seemed like the next best thing. Individual films and TV shows have always been my inspiration. In 1999, it was Aaron Sorkin and Tommy Schlamme, because at age 12, I was obsessed with The West Wing. When I discovered When Harry Met Sally in high school, it was Nora Ephron and Rob Reiner. When I started studying film history in college, it was Rob Rafelson and Bert Schneider because of how they pioneered filmmaker-driven filmmaking in the late ‘60s.
Samantha Quan: Strong, intelligent, and empowered actor/producers and director/producers creating works that they believe in. Reese Witherspoon, Ava DuVernay, and Sofia Coppola.
Shih-Ching Tsou: Working with filmmakers who care about integrity and humanity is very important to me. I don’t have a particular role model.
Dani Johnson: Before moving to Los Angeles, I worked as an assistant and a coordinator to filmmakers Jeff Nichols and Terrence Malick in Austin, Texas. Behind both talented auteurs was an incredibly fierce female producer named Sarah Green. Under Sarah were female Associate Producers and Co-Producers. And then, most recently, working with June Pictures under Alex Saks, and alongside our female directors and producing partners, I have been really empowered. Being a part of these environments with insanely hard-working females who don’t let the statistics hold them back, inspired me to do the same thing. Yes, there are real challenges females face in this industry, especially equal pay. However, once I recognized that people treat us the way we teach them to treat us, I decided that there are plenty of other things in life that may hold me back, but I’m not going to let being a female be one of them.

There’s a lot of talk about the dearth of female directors and showrunners, but what are other creative positions behind the camera that need more female representation?
Francesca Silvestri: Female directors of photography! I think they make up less than 4% of their guild.
Alex Saks: All of them, truly. DPs (Directors of Photography), editors, production designers, 1st ADs (Assistant Directors), focus pullers.
Dani Johnson: In short, all of them. Specifically, I would love to see and work with more female writers, line producers, DPs (Directors of Photography), gaffers, and 1st ADs. I know that some of the positions mentioned are not typically described as creative positions, but I believe the entire machine of filmmaking is a creative process that requires incredibly original approaches from department heads depending on the project and directing style. ♦