The singer on her new album, grief, and poetry. 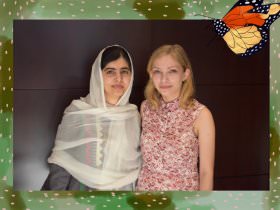 Keep on Fighting: An Interview With Malala Yousafzai 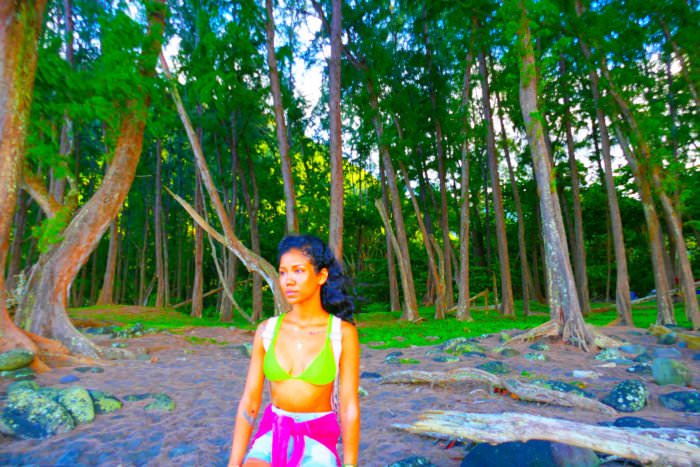 Jhené Aiko’s latest album, Trip, is a sonic exploration of grief, love, and enlightenment. The 22-track LP is filled with keenly honest writing about some of Aiko’s darkest moments. The concept album is filled with silvery, airy songs that can be played on loop—much like the rollercoaster of emotions it works to emulate. The album is one part of Aiko’s M.A.P (which stands for movie, album, poetry) project which includes a film, and a soon to be released poetry book.

I spoke with Jhené about her new album, poetry, and advice for young creatives.

DIAMOND SHARP: Your new album is out. Can you tell me about the thought process behind the album?

JHENÉ AIKO: A lot of it came from my notebooks. I’ve been keeping notebooks since I was really young, and since the death of my big brother. I guess what’s different this time around is that I really just referred to my notebook. I made this short film, and I made the album, and then I made the poetry book all just referring to these notebooks that I’ve been keeping. It became extra personal and super honest because it was literally just me referring to my diary. I just wanted to give it my all. There’s 22 songs because I didn’t want to compromise the story at all. It’s been a long time in the making. M.A.P is an acronym for “Movie Album Poetry” book. I had already completed the movie, the album, and the poetry book and I was explaining it to someone and then I realized that it was an acronym for M.A.P. It all made sense because this whole process of me creating all of these projects has sort of served as a map for me, to help me find myself, to help me heal and navigate through my suffering and pain, and even love and joy. It’s just helped me make sense of all these things and put me on the path of my purpose. It helped me really figure out what path I’m supposed to be on, and that’s why it’s a map. I feel like it could help other people going through similar things to stay the course and lead them to the light at the end of their tunnel.

So, you’re releasing a poetry book?

The poetry book is sort of like the culmination of the M.A.P. The movie and the album were all derived from the notebooks which mostly included poetry. So, that was just me adapting these poems into the movie and the album, and making songs out of it. With the poetry book, you straight up write a poem. I don’t have to tailor them in any way. My thought process is creating this thing that just helps me navigate through my inner-self and would help me find myself. Hopefully, it will help other people with anything that they’re going through, any loss that they’re going through. Or, if they’re just trying to figure out their selves, trying to find their way back to their true self. I feel like that’s what this whole process has been helping me do.

I wanted to know a little bit more about the Trip film. How did that come about too? What was your process behind that?

After Souled Out, I really wanted to just expand on my writing ability and I always wanted to write a movie. So, that’s what I started doing. And, what better way to do your first one than to make it a little biographical. I started working on Trip, writing it just as a short story. Then I got with Tracy Oliver, who’s a writer of Girls Trip. This was about two years ago, and she really just gave me a crash course in screenplay writing. She helped me storyboard the whole thing and turn it into a script. We took a whole bunch of my poems from my notebook, and turned them into dialog and put them in the movie as well. That was what I was focused on. I wasn’t really worried about creating an album, but then I wanted to score the movie myself. That’s when I started recording some songs here and there. I saw that it was just like I had got into a groove and then I started recording more and more. The movie, for me, was really a compilation of dreams that I’ve really had or things I’ve imagined—you know sort of like fantasies and real-life situations. It was just me creatively telling my story of losing my big brother. It was just something that has been helping me heal from everything. It’s a short film. It took about two to three weeks to film but a while to complete because I was a part of every single process. I scored it, like I said. I was editing it. Basically every part of the process, I was a part of. It was really, really fun and exciting and definitely something that I want to do more of. Even the behind-the-scenes tech stuff like the directing and writing was really fun to me. You know, I’ve been singing in the community for a long time, to where sometimes it could feel like work, especially with deadlines and stuff like that. But, making the movie was really fun. I’m looking forward to doing more.

I know you’ve been in the industry since you were young. What do you know now that you wish you had known then?

I know now that I don’t have to compromise anything for anyone. If I have a vision, I can take the time to see it through. I know that I’m around great people. I have a great team that is family and that they are all here to support me. They all help me see the vision through and I think it’s important to keep those people around you. A lot of people think that once they start working more and more, that they have to switch it up and work with people that they feel are on a different level as far as what they can do for you. But, I feel like what’s most important is, you could do everything you need to do for yourself. You just have to be around people that actually believe in you like you believe in you. I think, no one believes in you more than yourself. But, after yourself, the people that believe in you the most are the people that are your true friends and true family.

When my first album was sold out, I felt like a little rushed, but it wasn’t coming from myself. There were people that were putting the pressure on it, but at the end of the day, I allowed them to make me feel that way. That was really my first time putting together an album myself and I did allow other things to sort of control like how I was moving in the situation. But, this time around, I am super focused and I know exactly what I want and how I want it. I think that that is the most important difference.

Can you just talk a bit about your passions outside of music directly?

I love writing. Ever since I learned how to read, I’ve been fascinated with words and expressing myself. My mom is very creative. She was always arts and crafts-oriented and she would come to teach at our school and teach different art projects. My dad was always making acronyms for stuff and he would always like sit down with me to write my name with me. I just fell in love with words and writing. When I was in school, I did creative writing for the first time in the 6th grade as an elective, and it was my favorite thing. Even essay writing has always been fun to me.

When I was in high school, I was on an independent study which is sort of like homeschool but instead, you go to a teacher once a week. But for me, the last two years of high school, I went to a community college to get both high school and college credit. I found myself taking voice lessons but I had signed up for all these classes because the plan was to transfer to a UC. But, then I found myself just taking all English classes and no math to help me transfer. I just took every English class you could think of. But, I feel like it really helped me develop my writing and just have a better understanding of all different types of literature. That was super fun and helpful and, I do plan on going back to school someday. I always thought that I wanted to do a theater major but I think English is a love of mine. I just like to put words together. With this poetry book, I feel like it is the first baby step into the world of writing books and writing screenplays.

What advice would you give young creatives?

I would say definitely stay in school. I think what school teaches is a discipline about getting things done in a timely manner. It’s not always about, “The teacher knows best,” type of thing. But, it does help you with getting deadlines done and just having a structure and learning the history of the craft that you are pursuing. You can do that on your own as well. Learn the history so you have a better connection to it and continue to learn even after you feel like you’re super talented or good at it. Continue to learn and learn from your peers also.

Don’t be afraid to collaborate with each other and get together and put your ideas together and come up with cool creative projects together. I feel like when we collaborate, we really tap into a higher purpose. I think we are supposed to do stuff together, no one is supposed to do anything alone. That’s why we’re here with billions of others. Coming together to create is a beautiful thing. Stay determined. Stay persistent. Don’t let anyone or anything slow you down or try to compromise your vision. If you’re around people that are making you question yourself or your ability, then those are the wrong people to be around. Just stay the course and believe in yourself. ♦