The writer/director on capturing real moments, developing your own techniques, and amplifying other people’s stories. 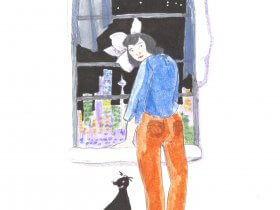 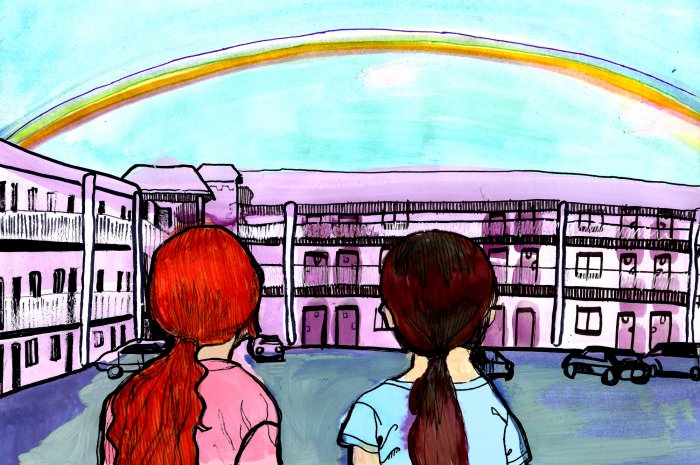 Sean Baker’s The Florida Project centers on a group of kids growing up in motels in Kissimmee, Florida, just outside Disney World. It has been called the best movie of the year by both critics and Drake, but talking about it feels so disjointed from the experience of watching it that even the well-deserved praise feels like a shame. Baker has captured something so lifelike and true, and when you talk about it in those other terms, it becomes just a movie.

It’s not that it’s terribly naturalistic or gritty. It’s not that the beautiful, unaffected performances by mostly unknown actors convince you that you’re getting a real peek into their lives. It’s more that you are getting a peek into life itself, as the kids; as your childhood self. Through their freeness on camera, the cinematography, careful scoring, a unique structure, and other elements I can’t easily pin down, you are reminded that, at that age, naturalism and magic are one and the same. Your imagination is as real as whatever your parents are yelling about. A world even more fantastical than Disney’s can unfold from the bleakest detail of your physical environment.

The Florida Project is Baker’s sixth feature film. He and co-writer Chris Bergoch based it on interviews with people who’ve experienced the characters’ struggles firsthand, as they had before with the incredible Tangerine. Before that, they collaborated on Starlet, Greg the Bunny, and Warren the Ape. I know I said it’s weird to talk about this movie, but I couldn’t pass up the chance to ask Baker how he made this thing. We sat down a couple weeks ago to discuss the process from start to finish, the ethics of storytelling, and the secrets that made this movie so special.

TAVI GEVINSON: What drew you to this world initially? How did you decide this community would be the subject of your next and bigger-budget film?

SEAN BAKER: We were trying to get funding for this way back in 2011, but we couldn’t. That’s why, out of desperation, we made Tangerine. But the world [of The Florida Project] came to me through my co-screenwriter because his mother had moved to the Orlando-Kissimmee area, and he’s a Disney fanatic. So he would always visit the parks, and said that at these red lights along Route 192, he noticed a bunch of kids playing in the parking lots of these motels. And they didn’t look like tourists. He asked his mother about it and his mother gave him an article or two from the local media, and he forwarded those to me, saying, “This is quite interesting and quite tragic,” and I read about this juxtaposition going on in budget motels right outside what we consider the most magical place on earth for children.

At the same time, I’ve always been influenced and inspired by The Little Rascals. And all those characters in The Little Rascals were essentially living in poverty, but it wasn’t the focus. The focus was them being kids and the humor that came from their behavior and their adventures. In a way, I thought this movie could be a present-day Little Rascals: It would entertain audiences in order to capture them, but at the same time, shed light on this [issue].

We met little kids who’d lived their entire lives in these motels. We started interviewing a lot of people along Route 192, and that led us to finding a motel manager. Just by accident, actually–we walked onto a property and we were approached by him because he thought we were up to no good. That actually inspired the pedophile scene. Chris and I walk onto a playground and there are kids playing. And this guy’s all of a sudden like, “Can I help you?” He had a drill in his hand because he was doing maintenance. And I was like, “Oh yeah, we’re doing an independent film and we would like to speak with you. Do you work here?” And he’s like, “Yeah, come on back to the office,” and at that point I realized we were being brought to the office to be interrogated.

So he sat down and eventually he knew we were legitimate because he was able to Google us. And then he opened up his world to us. I mean, he not only said we could come and talk with him anytime, but he even invited us to his farm, which was a county away, where he would take us around on ATVs, you know? The quality I noticed in that dude, as well as with a lot of the other motel managers, was this reluctant parental figure. Because he loved the families and had compassion for them. He was actually not that far away. He was holding onto a blue-collar job that he couldn’t let go of or he and his family would suffer. At the same time, he had to deal with the very real fact that he might have to evict one of them, and if he did, that family would be literally on the street. We saw families on 192 pushing shopping carts with all of their belongings and two kids behind them, onto the next motel that would take them. There aren’t any shelters close by, so he had to sort of keep a distance, but he loved them. There was something really incredible about that man, who was struggling a lot on the inside about this, and that inspired the Bobby character in many ways.

What were you most surprised to learn from all those interviews?

I walked into this with reading some of these articles that seemed a little biased, that seemed like they were trying to say it was the corporation’s fault.

Yeah. Like, “These are the people exploited by Disney.” To tell you the truth, there are many reasons that this is happening, but if you had to point a finger, it’s at the recession of ‘08. There are still many people–residents and small businesses and the local government and the corporations–all dealing with the aftermath of the recession. Disney actually gave $500,000 to the Homeless Impact Fund to help eradicate this in Central Florida. It’s going to take local, state, and federal funding to provide affordable housing. New facilities just have to go up.

I was also surprised to find out most of the people are transplants. They’re from the New York area, or Puerto Rico. But once people get there, they realize it’s a bit of a trap, because the jobs are scarce, especially if you have certain backgrounds, whether it’s bad credit or addiction problems, or a criminal record. They’re stuck without any sort of safety net.

Through my films, I try to see a common thread in everybody. I think that’s important–to show the universal stories that everybody around the world can identify with. Going into this project, I knew kids were going to be kids, so that was something I wanted to explore. That even kids in difficult circumstances–yes, they may be aware, and yes, eventually it will take its toll…I mean, there are studies that show that kids who are transient, who don’t have secure surroundings, do worse in school and lead down the same path as their parents into poverty. But at the same time, when they’re that age, they’re still playing the same games that I played in my suburb in [New] Jersey. When we were interviewing little kids, they were like–it was almost too spot on, we actually were going to put it into the movie but it almost felt written–“Yeah, we have our own club. It’s called the Runaway Club.”