Whose Streets?: An Interview with Sabaah Folayan 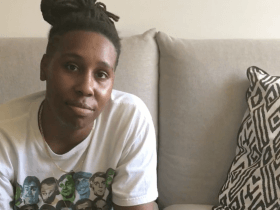 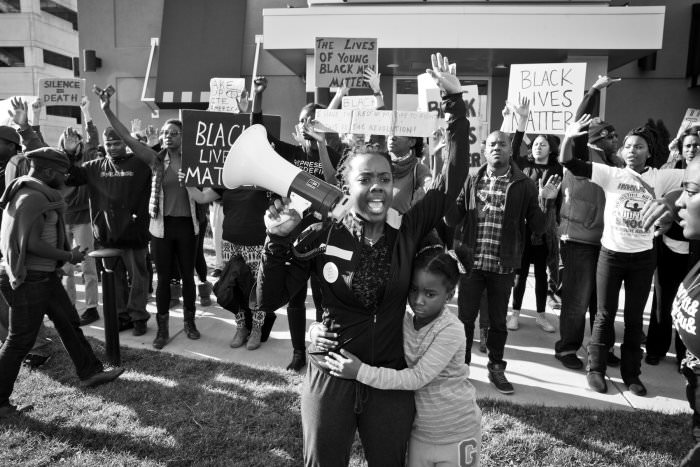 Still from Whose Streets?.

On August 9th, 2014, Michael Brown, Jr. was shot and killed by Darren Wilson. Brown’s family, friends, and members of his community took to the streets of Ferguson, Missouri to mourn and protest the death of their loved one. They were seeking answers and justice but were instead met with tanks, rubber bullets, tear gas, and other chemical weapons administered by their militarized police force.

These clashes turned Ferguson into a militarized police state. Citizens were heavily surveilled, couldn’t move freely through their neighborhood, and under the constant threat of physical and emotional harm. Police even barred journalists from recording these events, in an attempt to suppress this vital information. Activists resisted this media lockout, by posting their own videos of the demonstrations onto social media for the world to see. This countered the one-sided narrative mainstream news which largely favored the city council’s perspective. Director, Sabaah Folayan eloquently juxtaposes these two perspectives along with her own footage in Whose Streets?, an eye-opening documentary that tells the story of the Ferguson uprising from the viewpoint of those who lived it. This film not only gives us first-person accounts of the stress, trauma, and battles for space Ferguson residents endured while under a police siege but gives viewers a more intimate look into the lives of activists like Brittany Ferrell and David Whitt. We learn their struggle for justice doesn’t end once they leave the streets. It follows them home and intertwines into their everyday lives.

Folayan is able to memorialize the people who stood in front of those tanks, and the very real trauma and consequences that came after. Being black in America means you are always at odds with what you know to be true about the horrors of white supremacy, and what the establishment wants the rest of the country to believe. Telling our truth is an act of resistance in itself. Folayan’s choice to continue the tradition of centering our narrative, and tell our truth in a country that historically portrays black people as inherently dishonest, is what makes Whose Streets? so revolutionary. I was lucky enough to speak with her over the phone, where we discussed media colonization, how to shoot a documentary with sensitivity, and the politics surrounding property and space for Black Americans.

THAHABU: What initially brought you to Ferguson?

When someone travels to another town to help with direct actions or film, they may receive some pushback from locals, due to the fear that you don’t have the best intentions, or you’ll take up spaces that should be allotted for natives. How did you and your crew handle that?

We just tried to be really respectful of the community. My co-director Damon is born and raised in St. Louis and so that had some built-in accountability and perspective because part of the authorship of this film was someone who wakes up there every day and is accountable to the people who live there. It was never supposed to be about me whatsoever, there was never any consideration of me narrating it. It also wasn’t to teach outsiders about this community or like looking in on them as if it was like a zoo. We wanted to just show it from the people’s perspective unapologetically. That’s why we didn’t use a bunch of quotes, and figures, and outside experts, and really just let the people speak for themselves.

There’s a lot of talk about property vs. Mike Brown’s life in this film. “Whose Streets?” is a chant, but also seems like a literal question of whether black people are allowed to take up space or even exist in the very streets and towns that they live and pay taxes in. Was that theme always in your mind when you began filming, and putting the story together?

It definitely was, as soon as we got on the ground a lot of the conversations that people were having were about property value, and what the protests were doing to that property. The Quik Trip being burned was made into this huge deal, while Mike Brown being killed was treated as just an everyday occurrence, and that happening in public space, so that was always a major theme of the movement and we just responded to what were the messages that people were trying to put forward on the ground. I think the battle with the memorial was really about space, as David says in the film, it’s just about your own backyard because it’s thinking of the different levels of public and private space, and how we don’t really get to be safe in any of those areas.

The documentary employs three types of footage: news, firsthand videos from St. Louis residents, and your director of photography’s shots. How did you acquire, choose, and piece those images together to create the story?

Really from the internet. We just researched through the coverage and we found out there was so much, it was really hard to sift through everything. The problem with this film also was to try to make sense of this barrage of information and coverage that we get. Like, everybody filmed it but those images don’t always get placed into context, so we looked for the really potent images. I think our editor Chris McNabb did a really good job of stitching those different pieces of footage together to create a sense of continuity and a sense of space.

Whose Streets? gives viewers a deeper look into the personal lives of local organizers such as Brittany and David. You followed them even after the non-indictment was announced and some may have assumed the struggle was over. How did you go about achieving that more personal and familial mood in the film?

I think that was the natural consequence of us being on the ground there. We were really with people every day and we wanted to tell the human stories, so it only made sense for us to follow people outside of what was going on in the streets and into their homes and into their lives. I think that’s the piece that really gets missed, is the fact that people tried to portray the protests as being all these people from out of town, or people who are extreme, and we wanted to make the point that no, these are everyday people, people with kids, people with careers, people with lives that they put on the line because they felt that they weren’t safe, and their community wasn’t safe, for their children, so we wanted to contextualize it within their universal human experience.

In your director’s statement, you describe the mainstream media’s coverage of Mike Brown’s death and the Ferguson uprising as “Media Colonization.” Could you define that for me?

So what I mean by that, both on an abstract and physical level, people were coming in, bringing cameras and this huge level of attention to what was essentially people grieving publicly. And you know as somebody who went there and filmed as well, we did that too, but we tried to do it in a way that was respectful of people and their wishes, and their privacy and their human needs, whereas a lot of other people didn’t move in that way. So on a physical level, they were coming to neighborhoods not being invited, and on an abstract level, once they published their footage and stories, they would take people’s words out of context, take situations out of context, so they also colonized the narrative, and took over the narrative of what this was from the people who were actually engaging in it. And kind of took the public officials narrative at face value. It took people staying in the streets and putting all this pressure to even hear another side to the story when you did hear.

That reminds me of the way reporters descend upon black urban areas after a shooting or any tragedy, bombarding the victim’s family with cameras and insensitive questions with no regard for how recent the event was, or how they’re feeling as a human being.

Black pain is profitable. Black death is profitable, so people come and they extract whatever they can extract from it, and they don’t care about the consequences to the community.

The age of social media has created a conversation around the effectiveness of internet activism and art as a form of resistance. Do you consider this film to be art and/or revolutionary? Are those things allowed to work together?

Yes. I think anything can be activism depending on how you do it, and if you do it in a way that is trying to change the status quo. We chose the quotes that we chose in the film because we felt like there’s a long legacy of black storytellers and artists who have been using these different mediums to make these kinds of radical comments, and we haven’t always had an opportunity to do that in film. So we definitely see ourselves in the legacy of radical political commentary and radical black art.

Social justice work is exhaustive. It can become really easy to get in this mood of “Is it really worth it?” How do you keep yourself out of that mode of hopelessness?

I just don’t feel like it’s my job or ability to calculate everything. I think that as long as there are people on earth they’ll be good and they’ll be bad and we’ll always be sort of struggling and of course the goal is to continue to push and continue to tip that balance towards good and towards equity, but we’ll never see the results of our actions, we’ll never see all the ripple effects of what we do while we’re here on earth. So just because we’re unable to conceptualize the positive outcome or just because we can’t see the timeline doesn’t mean that it not there. It’s more of a spiritual question than a question of legal documents and I think as tactic we don’t have much else to lean on besides those promises. So I think that those documents and those American ideals, I think we recognized from really early on that it provides a powerful tool to highlight the hypocrisy of America because these things are on paper and it’s there for everyone to see and also to call people to actually try and uphold these values which in theory if they were actually upheld would be very positive. I think that all different tactics are required at all times and it’s pointless to try to have a conversation about what’s the best way or what’s the right way, it’s really about everybody getting involved in the way that they feel is best and pushing in the same direction.

I do feel like there’s a deep need across the country for people to have access to psychological services, particularly those who are involved in these incidents, surviving these incidents, witnessing them, protesting them, just people growing up in these “ghettos.” And it’s a ghetto in the same sense of the word because they’re cut off from all different types of resources and that takes a toll on people. I absolutely believe from my observations that PTSD is present and it needs to be addressed. ♦