“I have never been so happy to accept a sign of rejection.” 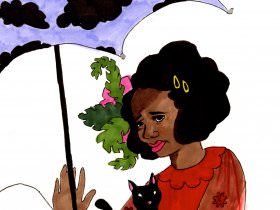 It’s been getting extremely hot in the Bay Area and if you’ve seen Spike Lee’s Do the Right Thing, you already KNOW that heat invokes chaos. My mom had to get a colonoscopy, or whatever it’s called when the doctor shoves a camera up your ass. So, she took me to Peet’s (to get out of the house because we don’t have air conditioning), and I completely underestimated the heat. I wore a tank top and BLACK DICKIES CAPRIS, and I’m thinking, they’re capris, there’s a lil’ leg!

“Hahahahahaha,” the sun laughed at me. “What a fool. May all the heat in the world conjoin for her suffering! 🙏🏾” I’ma just let you know the sun had it out for me. There weren’t any seats at Peet’s, so I walked half a mile (why???) to the donut place across from my old school. I didn’t think it was that cold in there, and honestly, I hadn’t eaten anything so my judgment skills were extremely poor, because I just thought to myself that I should walk somewhere else. And I think it was during this stretch of my walk that I realized I was nuts for walking in 100-degree weather, wearing black pants, on an empty stomach. I ended up walking around the entire block of the school and got to a gentrification-magnet of a coffee place that had really great air conditioning. Imagine me, completely soaked in sweat, standing in the middle of the whitest coffee place in Oakland, grinning like a maniac because I finally found AC. It even got so cold in there I had put my jacket on. I laughed to myself when I stood to leave and took my jacket off because usually, my parents are always telling me to put on a jacket because it’s cold.

Unfortunately, the heat was really strong and one of my blonde chickens died. I went out to mist them and she was lying all limp in the coop. I was really freaked out because I’ve never had to deal with a dead animal before. So, now I have two chickens. The other blonde one wasn’t doing too well either, and my mom and I spent two hours doing everything we could to cool her down. On one hand, it was cool to be able to pet my chicken because they’re not like dogs, they run when you get near them. But the only reason she was letting us touch her is because she was unable to fight against us. Later, when we got her to drink some water and eat some frozen strawberries, she started flapping, and I have never been so happy to accept a sign of rejection. I’ve been at a friend’s house for the past couple of days but I hope she’s OK. We’ve moved the chickens inside to the garage to keep them out of the sun.