Drowning in the Sea of Love on Lorde’s Melodrama

An odyssey through the artist’s new album. 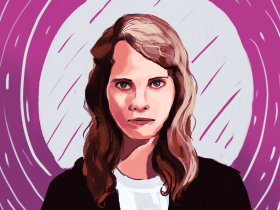 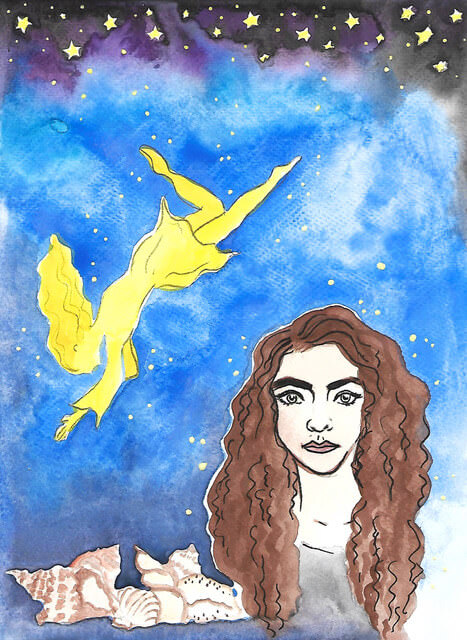 Lorde’s age has always surprised people, as if having a successful, focused vision was inherently paradox to being a teenage artist. But her age was always her vantage point, as she negotiated meaning among the trappings of pre-adulthood. She was 16 at the release of her debut LP, Pure Heroine, establishing a form of pensive pop that let her find depth in her youth, writing with both an urgent lust for life and a calculated itch to examine it from above. Her brooding fascination with teenage tedium had her lyrically sneaking out of boredom, finding mystery and consequence in streetlights and thick summer air. On Pure Heroine and its preceding The Love Club EP, Lorde was landlocked by her pre-fame, pre-heartbreak circumstances. You could hear rubber on suburban streets and bruises on mischievous legs, the corollaries of restlessness unfolded on a Saturday night. Her fresh-faced but wisened songwriting tendered complex vignettes of where she found darkness (and potential for something glorious), on the edge, as it were, of those “cities you’ll never see on screen.”

In four years, Lorde’s life has developed quite a few more edges, and the most jagged ones take enchanting form in her newest album, Melodrama. Fame and heartbreak, and the shift into her twenties, have made the universe from which she culls her writing so dark and so big that those edges have expanded out to sea. Almost like you can hold Melodrama up to your ear like a conch shell. Instead of the sound of city limits and chain link fences hopped at night, you’ll hear the sea of love, “where everyone would love to drown,” like Stevie Nicks—the rock canon’s enduring queen of high-peaking drama—sang on Fleetwood Mac’s “Sara” in 1979. Lorde rushes with abandon to that tumultuous shore.

She grabs your hand in a fervent let’s go the moment the album starts with the first single “Green Light.” Jack Antonoff’s sublimely off-kilter piano riff anticipates some urgent secret as she sings, “I hear sounds in my mind.” Notes tilting like uneven planks on a boardwalk, rusty nails and splintering structures, she’s dancing toward something ecstatic and salty-wet: the cold plunge of trying to get over a lost love through one bewildered night. The bass beats like a heart begging to go out and do something bad, like jumping in the water right then (fuck a clean party dress); a pounding, full body emotion. Suddenly, she’s swimming.

But you know that when you hold a shell up to your ear, you’re not really hearing the ocean. Those echoes are just picked-up background noise, plus the sound of your own blood pumping, keeping a rhythm. Normally, you don’t register these mundanities, but in the amplification of a shell, your brain takes notice. In Pure Heroine, Lorde picked up the ambience of adolescence and turned it into cultural echoes—songs that were accurate enough to relate to, glorified enough to spark a feeling, creative enough to herald in a new era of pop music. On Melodrama, a bonafide breakup album, a broken heart creates this ocean sound shell phenomenon, too. Its heightened sensitivity echoes the mundane into something like a metronome, a pulse-checking resuscitation from being either barely emotionally alive—or exhausted from utter feelings overdrive.

And Melodrama, as implied by its name, goes into overdrive. An album about heartbreak and partying might seem cloying until you actively listen to her distill these on-the-surface pedestrian dramas into all-purpose elixirs of youth. You’ll get a bit drunk on it. In “The Louvre,” Lorde commands, “Broadcast the boom, boom, boom, and make ‘em all dance to it,” pushing heartbeats that sound like they’re underwater into a danceable BPM. It’s an elevated version of the romantic adolescent craving to see your moments made into movies—but more like, Fuck Hollywood, let’s do PARIS. Let’s do timeless and ancient, in a gilded frame instead of on a silver screen. Lorde does the party in oil-painted resplendence, all gold and drama—“Can you hear the violence?” It’s her tableau, where spectacles of youthful recklessness and the death of romance play out. “Maybe all this is the party,” Lorde croons on “Liability (Reprise).” “Maybe we just do it violently.” It’s a stage for bundled emotional complications to tumble open to be sloppily wrapped up again, like in “Sober,” which so precisely carves out partying’s foolish ambition to forget and the accompanying delusional, medicated self-talk of, Maybe I do still love this person, and maybe they didn’t actually hurt me at all, because after a few drinks, I can forget what that pain was.

“Homemade Dynamite” has Lorde gazing at this scene, electing to take the risk of adventure for the shimmer of its allure. She’s still Lorde, though, so with wallflower wisdom to know when a shimmer comes from shattered glass versus any kind of magic dust. On this record, she uses her voice to tell more stories, to play other characters. “We’ll end up painted on the road, red and chrome, all the broken glass sparkling; I guess we’re partying,” is sung breathlessly high-pitched like a chorus of peer-pressuring imps circling over her head. The slightly distorted notes that punctuate every other beat feel like a drunk body swaying in and out of focus, vulnerable to a light graze of physical affection, or to the mischievous push of social winds. The party thumps along toward risk and furtive reward.

Melodrama, the album and the notion, is like the Tarot’s suit of swords, with its strength to cut through tedium and right to the heart of things, but also for its potential to recklessly pierce what is precious from getting too close. “Hard Feelings/Loveless” is this dangerous potency embodied, slyly composed in the form of a double track. The “Hard Feelings” side composes an aura of bedroom lock-down solitude, the wallowing slog of aloneness. We hear their ominous barrel when she sings, “The waves come after midnight.” The bridge of clamoring noise, like digital whales wailing in pain, is brilliant, soulful, and shattering. “Loveless” follows after a brief pause, activating a bit of madness, representing the shit starter who lives inside all of us—no matter how tender and receptive we are in our rooms, privately sifting through the Hard Feelings. Lorde’s voice chimes like she’s singing a playground chant, a devilish wink to how ridiculous it all is: inflicting micro-pains on the other through these merciless breakup exercises.

Then, to remedy what ails you, there is “Supercut,” the thumping champion of a breakup song with a sparkling double-meaning—the more a relationship’s montage plays back in her head, the more salt that enters her deepest wound. Those “wild and fluorescent” memories make the dull discomforts of detaching from a dead love dangerously easy to forget. “Supercut” ditches the moonstruck battiness of hypothetical should-have would-have conversations for a heart-puncturing moment of self-awareness. Pristinely designed for anthem status, this is Lorde’s “Dancing On My Own” opus. The listener surrenders to four and a half minutes of neon-bright soul recovery.

In the final track, “Perfect Places,” Lorde sings that she’ll “blow [her] brains out to the radio” just before imitating the loading of a gun, initiating the first chorus with a music-stopping ch-ch. It’s a volatile moment of astonishment; a hyperfocused encounter with something radiant but possibly dangerous. It sounds like the artwork Étant donnés, Marcel Duchamp’s final piece, which he made in complete secrecy over the course of two decades before his death in 1968. It looks like just a battened down wooden door framed by bricks, but when you find its peephole and look in—ch-ch—you’re met with a tableau of a nude woman in either post-sex or post-violence repose, on a rough patch of dead brush and leaves, holding a gas lamp, against a mystical forest and waterfall in the distance. That unveiling is intense—it’s an explosive, thrilling surprise. But once your eyes adjust to the scene, there’s a suggestion of something darker; the listlessness from being so literally naked and vulnerable, and the possibility for pain and violence even in an elated environment. Isn’t this how Lorde sees the party?

“Perfect Places” is an intoxicated strive for euphoric party pastures, but wonders what actually grows there, and if it isn’t a site of slight delusion, after all. Is there anything more prickly than the soul bleed of the pledge to kill your idols, wondering how you’ll have enough trust again to stretch your neck towards some ecstatic delirium?

To look into the peephole of Lorde’s party is to be electrified by sparkling exhilaration with a risk of sharp pain. She’s been a studied witness to both possibilities, and delivers Melodrama like a cold plunge into fearless emotional exploration. She, too, makes the sea of love sound like quite a wonderful place to drown. ♦