Paint a portrait of someone who fascinates you. 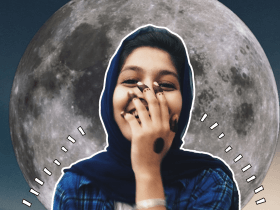 T is kind of a new friend, and we don’t even meet up that often, but boy oh boy.. when we do our deep talks are intense.

I tell T a lot of stories and he is a very good listener. Sometimes when I tell him stories through whatsapp chats, he would respond with a simple “O” or “A” or “E”, and I would just know that he is listening. Having someone who would listen and care makes me feel happy.

T tells stories too! He doesn’t tell as much as I do because I am a bit of an over-sharer, but listening to him makes me happy too. The way he tells his stories makes it feel like its carried with so much emotions and they made me feel things so intensely.

Like when he sends me pictures of his daughter. Witnessing his love for her is so heartwarming and beautiful. Manis, as I would describe the feeling to him.

Sometimes he would tell me sad stories too. Like the one he told last Friday. I remember seeing T’s lips quiver, his eyes started welling up, and his face turning red. Maybe it was partly because of the wine, but I was so overwhelmed with what I was seeing that I needed to close my eyes for a second. Reflecting on it, maybe I was trying to play it cool because I don’t want him to feel so vulnerable. Not that there is anything wrong with it and I hope he knows this too.

T, his quivering lips telling stories, stopping every once in a while to sip some wine maybe to hold back the tears which were welling up on his eyes, looking at me. A portrait of kindness.

When the creative prompt for this week said, “Generosity can really light up the world”, I instantly thought of T and how he has really light up mine. He has made me feel less alone, relieved me from feeling like no one could or would even bother to try to understand me.

And his kindness doesn’t end there. For my birthday, T gave me vouchers to his favourite bookshop and a pretty card with a picture of the Barbican (my favourite place in London, and apparently his as well as I later found out) on the cover. He wrote, “Happy Birthday Rache. cos’ you’re 20 and cos’ you can”. When I first read it, I was a bit confused with his ‘designer-y’ handwriting and so he had to explain to me the 2-0 part. It was funny and we both laughed. On top of being an inspiring person, he shares his laugh and that adds to him being a kind and generous person.

I don’t think I can ever write all of T’s kindness and generosity but I guess if this were a thank you note, I would thank T for being a really good friend. For all the material things, the wines, coffees, foods, tickets, his Tate membership card, etc. For making time to meet with me. For being there. For helping me to reflect, to grow, to learn.

Lastly, I think I want to say that I feel so lucky to have T as a friend, and for us to know each other at this point of my life. I wish him all the great things in life and for us to stay friends for a long long time.