The premiere of the band’s new video. 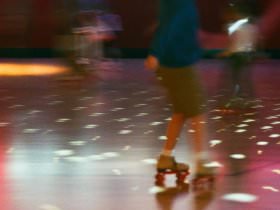 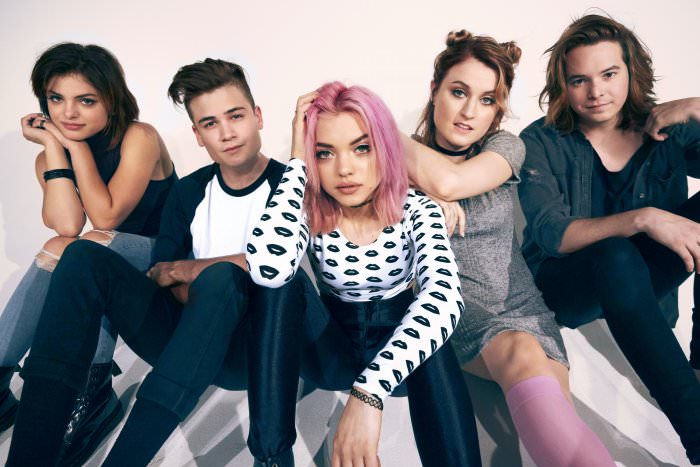 Hey Violet members—sisters Rena and Nia Lovelis, and Miranda Miller—first came together in 2008 to form a band when they were in middle school. A lot has changed since those early days–including adding members Casey Moreta and Iain Shipp, and casting off of their original band name, Cherri Bomb. What hasn’t changed is the energy of empowerment and championing of emotions has been their aim since the group’s inception.

The sense of freedom and confidence in their tracks is palpable. On their new album, From The Outside, Hey Violet recounts both the highs and lows of their teen experiences with renewed vigor. Today we’re premiering, “O.D.D.”, a track from the album dedicated to a feeling of unrest and a lack of belonging that strikes home to many.

Last week, I chatted with lead vocalist Rena about the making of the new album and the inspiration behind their latest track.

RACHEL DAVIES: How has your approach to music changed since first starting Cherri Bomb in 2008?

RENA LOVELIS: I definitely think the approach is a lot more hands on. I would say we’re very involved in what the music is becoming, and [on the new album,] you definitely hear the switch between not even just Cherri Bomb but even Hey Violet’s first EP to now. It’s completely different, we’re a lot more hands on in what we’re doing in the band. We’re very proud of the album, and very psyched to be able to show our fans the new music.

Since you started Cherri Bomb in 2008, the lineup has changed quite a bit. How did you go about finding the new members of the band, and knowing that you wanted to work this closely with them?

Well actually, you know how in certain places there are rounds of kid bands that will get together and play shows? We found a guitar player through one of those shows, who wasn’t Casey, and we started playing with him and he said, “Oh, I know this great guitar player. I can bring him in and we can all jam.” I think Miranda was on vacation, but Nia and I were just looking to keep up after the end of Cherri Bomb, and find new people to jam with. Everyone has a different way of playing, so anything that we could possibly learn from other musicians we’d be thankfful for. He [the guitar player] brought in Casey and we loved him, and wanted to get him for the band since Cherri Bomb was coming to an end. We were playing shows with him for a little while, and I think on the third or fourth show we asked for him to be in the band. With Iain, there was a band rehearsing at my house, because my parents work with bands, and he was their temporary bass player and we asked him if he wanted to go on tour with us. It was kind of just a chance encounter. We get a lot of bands that ask how to get the right people, but I would say if you go to school with people that want to play music, that’s amazing. You can find people online who put up YouTube videos that you can speak to, and obviously have to speak to their parents if you’re not an adult. I would say finding the right people to be in the band is one of the most important things. However you can find the people that are just as dedicated and just as passionate, the better your career can be.

You wrote the songs on From The Outside together, right?

Actually we split off into pairs! It was mostly Nia and I doing a lot of the writing since it was kind of the first big thing. We would all split off into pairs, and we would go and collaborate with our producer, and with other writers. We feel like when it’s all of us in the same room, and a whole other team we’re collaborating with, it gets to be a little too much. It gets a little manic, and we’re talking over each other. [Laughs]

A lot of the songs on From The Outside are about romance, but “O.D.D.” is kind of an anthem of self knowledge. Can you talk a bit about the inspiration for this track?

Whenever we play this live, I give my spiel before the song. I say, “We all feel different sometimes, we all feel a little out of places, a little messed up, and honestly it’s okay and it only makes you human. There’s nothing wrong with being human. That’s the most honest and vulnerable part of you, and it becomes more authentic and more true to who you are a person.” I say that at shows because it’s like a precursor to what the song is about, and I think it resonates with a lot of people, with me, and with the band. It’s OK to be yourself, to have your own opinions, and voice. You should never apologize for that.

You’ve done a lot of touring and you have this real relationship with your audiences. Do you feel like knowing your audience in this way affected the way you wrote songs for this album?

I definitely think that what we were going for in terms of playing these songs live and what songs we put on the album was that we saw what resonated with the audience most live, and we saw how they connected to it. People would put up live videos and show others who couldn’t come to our shows because of geographical reasons, but could see them and choose their favorite songs, and we love that. So I find it so personable with our fans because we really listen to what they want. I just think that maybe it doesn’t inspire what the song is about, but I definitely think it inspires our choices of what should be on the album and what we play in our sets.

The band has a really defined look whether it’s in music videos like the one for “Guys My Age,” working with artists like Savana Ogburn, or the animated visual for “O.D.D.” Could you talk a bit about the relationship between your music and the visuals?

That’s a good question, I know that when we have visuals that we either mock up, or have our team put together something, we’re very hands on with how we want to [accompany] the songs. When it comes to the music videos, we really take time to listen to the treatments and to talk to the directors about how we want it to come about, and how we want it to bring the song to life. So it’s very important to us, and I think the connection between is really important because it’s representing your songs. So I think with the visual that we have for “O.D.D.”, while that isn’t a music video per se, there’s this air of desperation to it. When you feel like you’re alone, or you feel like you’re an outsider, there’s this loneliness to it, [and in the video] there’s no people until they’re outside of the show that’s set up in the middle of nowhere. You see all these people united at the venue that’s out there somewhere. It’s very important to us.

The tracks on the album are really diverse. “Break My Heart” is really electro, and “This Is Me” has more of a rock feel. Who are some of your influences for the album?

Oh, totally! We have a bunch of influences, from The Weeknd to Cyndi Lauper. That already is pretty different. The Weeknd when it comes almost to the almost groovy, but still melodic feel to the song, and then Cyndi Lauper [we were inspired by] the synth sounds in time after time, and the groovy verses to the song “I Drove All Night.” Then other artists like St. Lucia, the 1975, 21 Pilots, I feel like they all had a part in inspiring us in writing these songs.

I definitely think that surrounding yourself with people that are going to be supportive of what you’re doing is extremely important. That’s probably one of the most important things that anyone can say to someone trying to be an artist or be in a band. You need to surround yourself with people who’re going to support you—not bullshit you per se, where they’re like, “Oh, everything you do is amazing,” but give you constructive criticism. Constructive criticism, like, “Maybe the melody should be like this!” I definitely think having the confidence to be surrounded by people who are going to love you and support you no matter what is very important. It helps you to be vulnerable, and share your music with the world. Maybe even if it’s starting a YouTube channel where you can post stuff without standing in front of someone and awkwardly sing a song to them. You can just put up a video and be happy that there are people out there watching it. I think getting over the initial shock is the most important because then you get confidence and realize that there’s nothing scary about sharing art and what you’ve created. ♦