A party is exponentially less disastrous when you expect nothing from it. 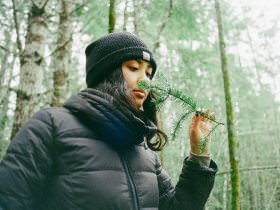 We Were the Only Two 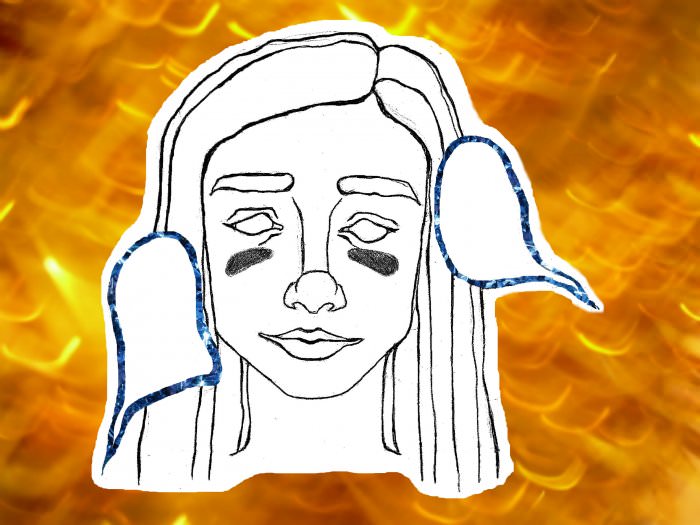 I’ve learned, over the years, that a night out is exponentially less disastrous when I expect nothing from it. I tell my friend Grace tonight will be a victory if I don’t end up crying and/or throwing up at 6 AM by myself. We’re sitting on her bathroom floor, and I’m applying a thick coat of dark brown lipstick. We’re listening to empty pop songs bursting loudly from her stereo. She doesn’t respond but I don’t think any of Grace’s nights have ended with her trying to breathe over her violent sobs while she’s laying on her bed, and then it gets so bad she has to sit down or she’ll choke. So perhaps she believes I’m just being self-deprecatingly funny.

I glance at my reflection in the mirror. I squint my eyes so I’ll only see an unfocused version of my own self. Grace’s bathroom is extraordinarily well-lit. I try to avoid overanalyzing my blotchy skin, covered in my mom’s one-shade-too-light foundation, and my crooked nose and my robust lips that nobody ever wants to kiss. I want to feel alluring tonight. Poised. And that will only work if I forget.

I’m aware I’m deceiving myself. There’s an unintentional, almost permanent hopefulness surrounding my every thought. I feel as I am already there, at the party, experiencing the rush contained in the period of time until I have to be home, alone and empty, longing for another night. For those short hours, everything outside will cease to exist. I can simply be.

Maybe I’ll meet someone. Someone kind, comforting. Maybe we’ll share long, profound musings about the moon and the bands that make our skin tingle. Maybe someone will play my favorite song and that will be enough. I’ll dance with my hands above my head and my hair untied and my bare feet tapping on the floor.

I chug a sip of air before I slide into the backseat of Grace’s red Volkswagen. There’s a soft breeze touching my uncovered legs and I shiver, but it’s a pleasantly uncomfortable feeling. Grace says we need to pick up what’s-his-face before we head to the party. I groan quietly, even though I’m partially thankful. In this static instant, this party is a simply a mist of possibilities, none of them real. I want to prolong this quietness inside me, this blissful anticipation that comes before reality. I crack open a window. Grace complains because it’s January, but I pretend I can’t hear her.

“I’m afraid I’ll have the worst time. I hate these kinds of parties,” Grace says as soon as she parks her car. I want to laugh, because I don’t understand.

“I’m not afraid of anything.” I respond.

The house is crowded and smells like smoke. I make my way into the kitchen, where I know the liquor is preciously stored. I’ve purposely eaten less of my mom’s veggie casserole so that I’d get tipsier faster, and I know it’s sick to think like this but I don’t care. I bump into a number of nameless bodies on my way and hear a couple of loose hellos, but my mind is set on this mission, so I stroll faster.

“Woah, are you trying to get wasted?” Quincy Baker smirks at me as I take a big sip of lukewarm beer that someone handed to me. He watches me attentively. I fight the urge to flip him off—he’s the host, so that wouldn’t be very polite—and grin slightly.

“Then you have the wrong drink, dear Livie.” He offers to make me a cocktail. I doubt it will be any good, but he reaches for a half-empty bottle of tequila, and I stay quiet. None of us attempt to make small talk. I observe him as he greets his guests cheerfully. “There ya go. Enjoy the party!”

Quincy’s cocktail is impossibly bitter and strong and tastes like metal. I drink it fast so I don’t have to taste it. I thank him nonetheless, and he winks at me. It makes my stomach flutter even though I know he’s always winking at every girl and am pretty sure he doesn’t think I’m pretty at all. I make my way to the living room and breathe out in relief when I see my friends. When I see Sam. We hug, and it’s not strange. We’re friends, after all.

“Livie, you look nice.” He beams and I want to cry. “Are you having a good time?”

“I am. I’m happy that you’re here.” I smile earnestly. We talk about how it’s going for both of us. Sam is enjoying his classes. He’s playing football. He got his driver’s license. He says he still listens to the mixtape I gave him. He gives me a bit of his drink. I ask him a lot more questions than he asks me, but I don’t mind. He’s here, and I’m radiant.

Grace runs up to me and she says they’re playing our song, and I pretend to know what she means and slug my drink to join her on the makeshift dance floor. I tell Sam I’ll be back in a second and he nods distractedly. I glance back once again, and a second later I’m moving.

I close my eyes as I sway my hips. Every part of my body is trembling. I hear Grace’s chuckles as we move together. We’re the only ones dancing. I only open my eyes when a song is over and there are couple seconds of clearness and I look for Sam. Sometimes he looks back and we grin at each other and I have hope that it’s possible for this feeling to be true tomorrow. Then I close my eyes again and I’m seeing shapes and fluorescent colors and bright lights. I’m moving fast to the beat and laughing until my bones are shaking. My ankles hurt from jumping up and down for so long but then I stop feeling any pain. I am so light I could evaporate.

Grace says we should stop dancing for a second to socialize. She says we’ve been dancing forever, but it only felt like a moment. There’s no one I want to talk to, except maybe Sam, and I don’t see him anywhere. I say OK anyway. I choose an empty couch in the corner of Quincy’s packed living room. Across from me, Grace is sitting on Todd Goldman’s lap and they’re looking into each other’s eyes tenderly and I’m observing every soft move they make even though I know I’m being a creep. It must be nice to have someone look at your face that up-close, knowing they don’t even care about your horrible skin because they’re so into you and they want to hear every thought you have, every concern, every cheesy joke. Will I ever understand?

I’m starting to get sad and then Chrissy Diaz, who went to high school with me, flops down on the couch and, before I can move, a guy I vaguely recognize is on top of her and they’re making out with such passion she keeps hitting me with her elbow. It’s like I’m not there, and I start believing I’m not so I get up and stumble out of the room to get another drink. Every time I start feeling lonely, I think if I drink more, the fun eventually returns.

I look for Sam while I wander around Quincy’s huge house. I find him in the kitchen with his girlfriend, Betty Mercier, an Instagram model. She’s sitting on the counter and his body is placed strategically between her legs and they’re sharing a drink and giggling giddily at each other. It makes me want to throw up. I turn around to walk away and I catch his eye. I’m running up the stairs and think run after me, asshole but I know he never will, and I know there’s not a single reason why he should.

Everyone is sort of blurry and I start to feel dizzy. I lean across the wall to steady myself. I keep looking around to see if someone will notice me, but no one ever seems to. I don’t want to go downstairs and dance anymore.

I lock myself in the closest bathroom and stare at the mirror. I’m starting to feel trapped and horrible and it’s not a good feeling at all. Someone knocks at the door furiously and mumbles something quickly but I choose to ignore it. I want to cry because I feel so ugly and so lonely. I don’t know if I truly feel this way or if I’ve had too much to drink or both.

I sit on the floor and rub the back of my hands against my eyes. I try to figure out how I ended up here. A few hours ago, I was graceful and reckless and glorious. I was hopeful. Right now, I am a wreck. And I am alone. I don’t really like this part—the introspection. This is when I realize I’ll always want something to happen, something greater than great. And then I’m hit with the realization that a night is just a night and tomorrow will exist and I’ll have to live in it. Every good thing in my life vanishes.

When I leave the bathroom, Grace is sitting on the floor, waiting for me. She gets up and points her index finger at me, accusingly.

“You!” she whisper-screams. “You disappeared! We were all looking for you.”

I tell her the house isn’t that big, really. And nobody seemed to care where I was a few minutes ago. I had to spend the night by myself.

Grace sighs, clearly annoyed. “You left, Livie. You could have made an effort.”

I say I’m sorry I didn’t mean to leave, I say I’m so drunk I can’t keep my eyes open and I half-laugh for an instant, in a sort of maniac, phony way. Grace shakes her head. I hate that I always make her nights worse.

I say sure, it was a cool night, but now I’m exhausted and I’d love to go home. I’m being truthful, because I did enjoy myself for a while, but right now I’m slowly collapsing.
I’m walking behind Grace and I notice the house is a lot emptier and no one looks as lively as they did a few hours ago. There are some people who are still trying by dancing clumsily or kissing fiercely, but the atmosphere is less electric. Maybe I’m not a freak. Maybe everyone’s night ends in gloominess.

I don’t think of anything when Grace drives me home. I want to store these hours inside me. Another night has passed, and I felt it all. Tomorrow I’ll look for a flash of color elsewhere. ♦