A podcast, short film, and TV show to add to your queue. 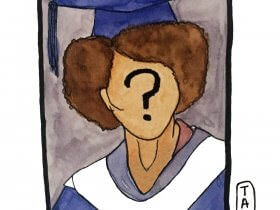 Have you ever looked at a red carpet photo of someone you can’t quite place, or read a a familiar name in movie credits but you have no idea why you know it? If so, the “Who? Weekly” comedy podcast is for you. Hosts Lindsey Weber and Bobby Finger are pure geniuses with this amazing series, which they describe as “Everything you need to know about the celebrities you don’t.” I can’t tell you how many times I’ve cackled loudly while listening to new episodes, served up twice a week. Lindsey and Bobby have their own set of vocab that you’ll quickly adapt into your own vernacular: a “Who” is a non-famous person (think: YouTube stars, kids of famous people), a “Them” is a definitely famous person (the Brads and Anjelinas of the world), and a “Try-hard” is a Who trying hard to be a Them (think: reality TV personalities who won’t go away). There is also a devout fan base of the podcast. They call themselves “Wholigans” and keep other Wholigans informed of the goings-on in the lesser-famous celebrity orbit. But make no mistake, this podcast is serious stuff; I’m very impressed with the commitment and in-depth reporting Lindsey and Bobby devote to getting the scoop. Have a listen. You won’t need to know anything about the people they talk about in order to enjoy this show. —Jinnie Lee

Cowboy and Indian is a short film written and directed by Sujata Day. You may recognize Sujata from her roles as CeCe on Awkward Black Girl and Sarah on Insecure. The film follows a Bengali bride who seemingly appears out of nowhere in the desert and the cowboy who rescues her. The pair spend the duration of the film trying to communicate with each other before an unexpected twist at the end. I appreciate that the film’s title is referencing the cowboy Western genre but with a smart and unanticipated spin. I’d love to see a full-length version of Cowboy and Indian, and I’m looking forward to seeing more work from Day. —Diamond Sharp

Some Girls, a British comedy that aired from 2012 to 2014, is a television gem. It’s about a group of teen girls—Viva, Saz, Amber, and Holli—growing up in a working class neighborhood in London. They deal with the usual teen fare, like getting caught up with crushes and upset over body hair, but that’s not what really makes Some Girls special. The diversity of the cast really stands out. The main character, Viva, is a dark-skinned black girl who’s a level-headed academic overachiever and has the most deliciously awkward love life. When’s the last time you saw a similar character? Also, Some Girls isn’t afraid to depict girls being crude and lewd. The kind of things the girls talk about would never be allowed on American television, but it reflects conversations that are typical amongst teen girls. In a television landscape that recently has been dominated by teens who either turn into vampires or moonlight as homicide detectives, it’s refreshing to watch a show about teen girls being teen girls. Catch it on Hulu and you’ll be hooked! —Ashley Reese ♦