Creative Prompt: Visit Your Past Self

Check in with the old you to see how much you’ve changed. 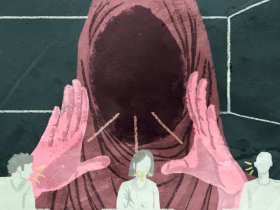 Trusting Your Own Authority

The energy was so palpable you could cut it with a knife.

The energy exhausted every cell in my body, but also invigorated me, making me focus on every detail.

The energy hummed all around me, singing a song that made everyone move in rhythm to its giddy beat.

The energy reached inside of me and called me as I began to maneuver through a crowd of panicked businessmen whirling by and families with oversized strollers that thought a good vacation idea would be to stuff them and their three kids on to the overcrowded streets of New York City.

I pack myself like a sardine on the escalator, swimming in a sea of people to the top of the platform to get to Penn Station.

Once I get off the escalator, I allow myself to time to get my bearings and take in the gray marble floors that sprawl across the station, littered with grimy pennies and chewed up chewing gum. I take in the aroma of greasy, sugary fast food and the white noise of too many people talking at once, with an occasional note from a street musician cutting in.

Looking up, I start to pay attention to the signs, searching for the one that will lead me to my destination. Like a beacon, it blazed before me. It knew where I wanted to go, and it pointed straight to the L line. I took off, dodging a woman with at least three suitcases, a man in khakis and a bucket hat talking obnoxiously loud on his cellphone, a young couple that looked hopelessly lost, and a group of teenagers that looked like they knew exactly where they were going.

Heading into the corridor, I became part of the energy that pulsed through out Penn Station.

Weaving through the crowd, I continued walking to my destination. Part of me wants to drift off into a frantic frenzy that mirrored the people rushing by me like bolts of lightning. I force myself to concentrate on where I’m going, dashing in between the two women looking up directions on their phones, dodging around the man with dreadlocks and an American flag bandanna around his neck, cutting in front of a group of tourists wearing socks with sandals. This goes on until I reach the subway.

The subway, bearing the weight of hundreds of people, carrying billions of germs, rigged with the same greasy, sweltering smell from Penn Station. Brandishing my metro card, I successfully swipe it across the stainless-steel machines that guard the subway with their turnstiles.

Moving along, I head to the platform and wait for my train. I peer into the pitch black corridor, wondering what lies ahead in the cloud of black nothingness. My question is answered when a glimmer of light appears, growing larger by the second.

With a punch, the train rushes by. I peer into its windows, praying the subway cars are empty, so that I won’t have to squish myself in a tight space with complete strangers, grasping a metal pole like a lifeline.

The cars are relatively empty. I’m in luck. Hoping on, I take a seat on an empty bench. I travel to my stop, then jump off. I walk confidently to the stairs, knowing where I’m going.

Finally, I emerged from the chaos into the calm.

A gray sky hung over my head, soothing me from the sensory overload that I had left behind underground.

I haven’t been to Brooklyn that many times, yet I know the neighborhood’s street like the veins on the backs of my hands. Wythe, Berry, then Bedford, 7th, 6th, then 5th.

I know I should stay away from overpriced thrift stores and junk shops with musty records and old photographs, but scars of what we once were as a society have always enticed me.

I looked around, got my bearings, and headed off. I made a left at the corner of Driggs, then continued walking along the street. Coming around the corner of 10th, I descend into the stairs of the junk store.

The junk store was a place where you could spend an entire Saturday sifting through the piles of old family photos and forgotten records, or admire the haunting beauty of broken microwaves and radios crammed onto dark wooden shelves. I never get bored of it.

The only window in the shop illuminated a huge bin filled with sepia photographs of someone’s nephew on the night before Christmas in 1957, their lover on vacation in Catalina in 1961, or their daughter on her 16th birthday in 1975.

Next to that were faded caramel shelves, teeming with old records. The store tried to organize them, but records had begun to stack up on struggling piles in the corners of the store. The rest of them were packed on shelves with absolutely no order, without any sleeves, their coat of shiny black vinyl subtly shined under the warm overhead lights on the ceiling.

Walking away from the maze of records, you enter the main area of the store. To the left, you could find smaller household appliances, such as rotary telephones, smashed record players, typewriters, and a menagerie of dainty teacups. To the right, you could find shabby armchairs that had huge chunks taken out of them, dark coffee tables that were missing legs, and the occasional headboard.

The entire shop radiated a certain warmth to it, but there was also an edge of cold hard nostalgia that could only be generated by mountains of stuff that once belonged to someone full of life.

Taking one last look around the store, I headed up the stairs, back to the streets of Brooklyn. I may have plenty time left on this earth, but the minute my soul leaves this place, I know all of my physical belongings are heading straight to the junk store.