A cover of one of our favorite songs ever. 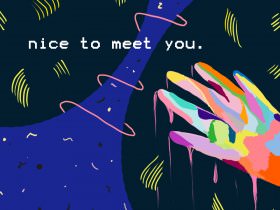 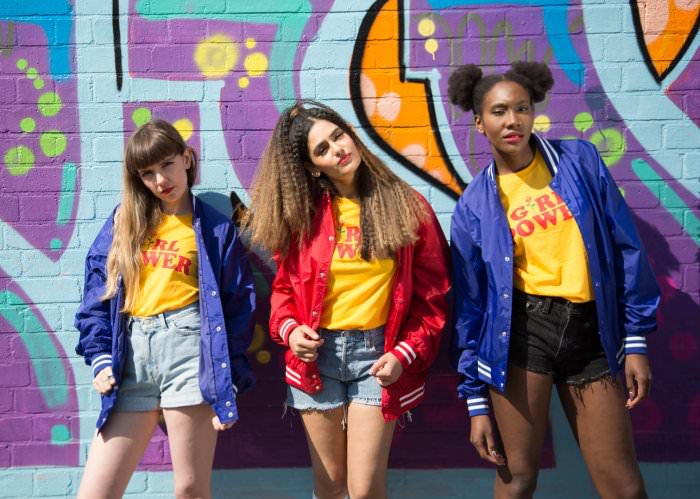 Nadia Javed, Harriet Doveton, and Beverley Ishmael are the Tuts, a self-described “three-tone girl band from London.” They’re best friends, unsigned, and unafraid to call out sexism and racism. They’ve supported Kate Nash on tour and premiered their song “Do I Have to Look for Love?” here at Rookie back in 2015. Since then, they’ve released a new crowdfunded album, Update Your Brain, and are about to go back on tour in May. The band is calling the tour “Something Worth Voting For” as a way to provide “something to look forward to, [considering] how fucked up the political system is right now.”

Last time the Tuts went on tour, they self-directed and edited a video for their cover of the Spice Girls’ “Wannabe.” You can download the song for free here, and watch the video for free now!

I called up the Tuts yesterday. We chatted about the Spice Girls, spices, and not taking shit from anyone.

MADELINE KEYES-LEVINE: The video is so fun! Can you tell me how it came together?

NADIA JAVED: So basically we were on a European tour at the beginning of this year. We took our cameras with us and were just miming in the street. We were directing it on the go—like we’d see a cool backdrop or wall with some graffiti and we’d be like, “Right, we’re going to film out there later on.” We’re a DIY band. We’re unsigned, we don’t have management. All of our creative ideas come from us, so we are just so passionate about everything we do. Sometimes you have to be spontaneous, so we filmed it while we were on tour and I edited it. We wanted it to show our different personalities. All our other videos are in a studio and have a lot of planning behind them, but this is really showing our personalities. Like, “Here we are, we have our own personalities like how the Spice Girls have their personalities, except we’re better than the Spice Girls because we have more diversity and we don’t vote for the conservative party!” Someone left a comment on our promo video saying that the Spice Girls voted for conservatives, which is ironic because we hate the conservative party.

Politics aside, what’s your favorite thing about the Spice Girls?

BEVERLEY ISHMAEL: Just everything! The way they made me feel when I saw their video for “Wannabe.” When we were picking a cover, we were like, “Which song should we do?” We chose a different one at one point, but then I was like, “Nah, it has to be ‘Wannabe,'” and I’m so glad it was! When I was about 10 or 11 or whatever, it just made me feel amazing about myself. They had so much energy and so much attitude. They didn’t care. They spoke out. They had no filter. I love that.

NADIA: The Spice Girls were the first thing that got me into music when I was younger, when I was out in the playground at school. We all grew up in the ’90s, and the Spice Girls were the pinnacle of our musical interests when we were younger. The way they dressed, like the platform trainers. The way they acted was, like, out of control. There was always an element of the Spice Girls. Because I’m brown, I would always get lumped in with being Scary Spice, but deep down I always wanted to be Baby. But yeah, it was the first album I ever bought. In a way, I bonded with my dad over them because he would take walks up to Woolworths and he would buy me music and I had a little Walkman and I would listen to the Spice Girls on repeat so loud and learn the raps and everything. It was just the first thing that properly got me into music.

HARRIET DOVETON: Same goes for me. I remember recording “Wannabe” onto VHS. I would wait for it, when they used to play music videos on TV , and I remember recording it. As soon I got home from school I would put on the “Wannabe” music video on my VHS player, and I learned the whole routine. I never had a favorite [Spice Girl]. I identified with all of them. I was always really impressed by Geri because I was like, “Oh my god she does whatever she wants to do.” I remember her challenging men a lot and being really impressed by that.

Which Spice Girl do you most identify with?

NADIA: Right now or back then?

NADIA: Right now, because I’m a bit manic, I’m either Baby or Scary. I’m either like a baby or I’m fucking nuts. Yeah, I’m a scary baby. I’m Indian so I’ve made up my own Spice Girl, actually. It’s Indian Spice.

HARRIET: Nowadays I like Mel C, but Mel C has been slut-shaming Little Mix and we can’t stand for that. We love Little Mix.

BEVERLEY: Salt! Just put some fucking salt on it, man.

HARRIET: We like our seasoning because we’re vegan and don’t eat meat, so like nutritional yeast that has B12 in it.

OK, last question! Is there anything you want to say to the Rookie readers?

NADIA: Oh my god, this is so fucking hard. It’s like an essay, it’s so open. I’m gonna go home and be like, Fuck, why did I say that? But basically, we just wanna tell Rookie readers that they should pick up instruments. And they should do what they want to do. And basically don’t let anyone tell you you can’t do it. And if there are any girls [of color] who are reading the magazine, don’t let the lack of diversity put you off. You’ve just got to do it. Don’t let racism or sexism put you off. Just keep fighting for what you believe in. We just love girls. We want more girl fans.

HARRIET: Don’t be scared to have an opinion about something. You know how boys, when they’re growing up, say everything matter-of-fact, like “it’s this, it’s that.” As women, we more say “MAYBE it’s this, I think it’s that.” Loads of times these boys are wrong anyway. So don’t let boys mansplain shit to you because they don’t even know.

BEVERLEY: Hold your head up high. Don’t take no shit from no one. You’re better than anyone else.

NADIA: When we were at school we got bullied. People used to shout shit at us. We used to get beaten up and shit. We were like the people no one wanted to hang out with, and now we’re playing to crowds, we’re inspiring young girls, we’re wrecking it, we’re fucking living the dream. ♦

P.S. Here are details for the Tuts’ upcoming tour. Check ’em out! 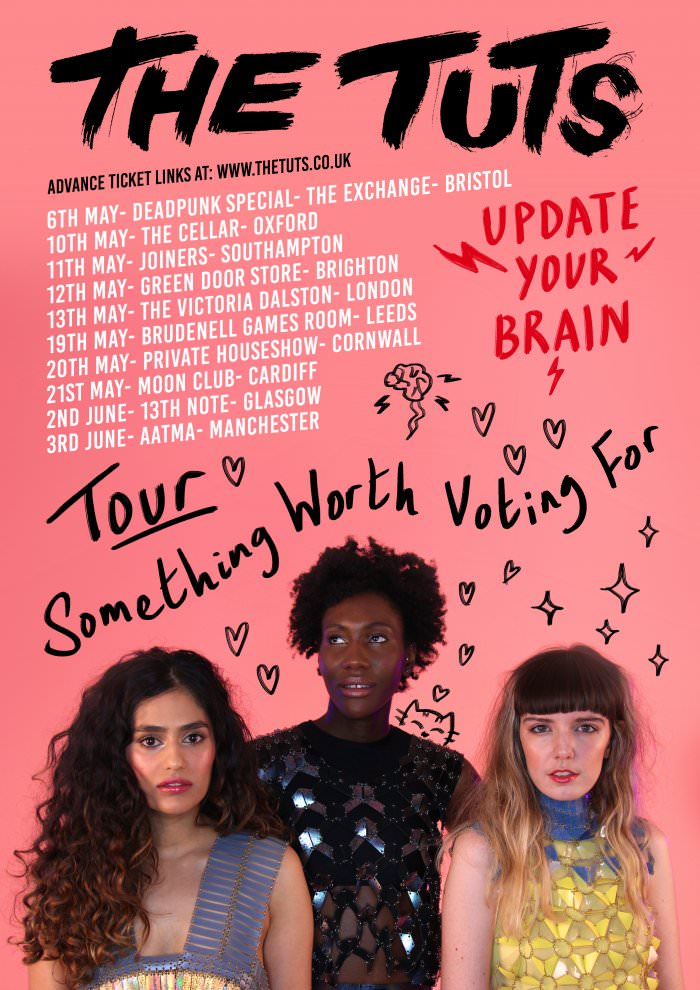