An 18-year-old artist who wants her work to scream “female empowerment.” 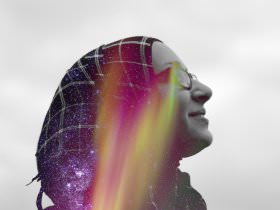 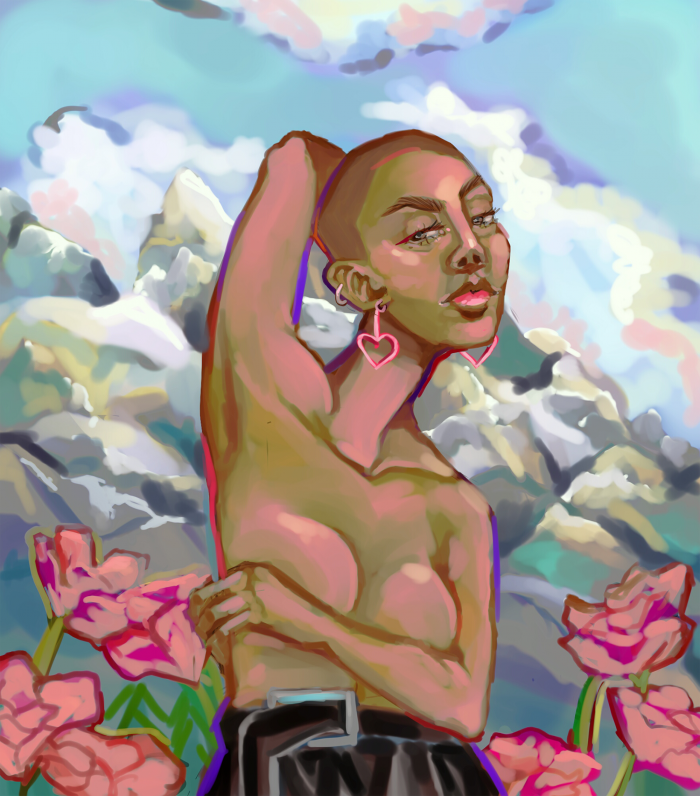 Laurena Finéus is an extraordinary 18-year-old who sees it as her duty to create art for black girls like herself. Her digital paintings are loaded with fruits and plant life, which work as luscious frames for her subjects. The results are reminiscent of the work of Frida Kahlo, but with Finéus’s own nuanced worldview. We recently had a chat about black girlhood, working with digital media, and visions of the future.

MINNA GILLIGAN: Hi, Laurena! You just finished exams, correct? How do you plan to spend your summer holidays?

LAURENA FINÉUS: I’m currently studying for a Bachelor of Fine Arts at the University of Ottawa and hopefully a master’s degree in the future. Just recently I finished my first year of university, with my last exam on the 22nd of April. This summer is going to be about making the most of my art by creating more of it and just working on future projects. I’m planning on doing my first exhibition next year, so I’m thinking about what kind of artworks I could have exclusively in it. Also, I’m working on getting my brand and my name more established online by creating a website, business cards, and probably an online portfolio to post all of my art series.

Is there anything particularly inspiring about your local community?

I am based in Ottawa, in Ontario, Canada. Being Canadian really gives me access to many cultures, especially in the capital. Labels are not as important here. My identity is just this vast and complex thing that I could never let just a single label define. That’s probably one of the many great things that comes with living in a bilingual and ethnically diverse city like Ottawa. This city really gives me the freedom to be myself unapologetically. I’m a Canadian born, Haitian raised, and also French Canadian young black woman. I could never just stick with one title because they are all part of who I am.

Where did making art begin for you? Did it arise out of some sort of unspoken urge, or from a more obvious catalyst that you are able to pinpoint?

I mean, that’s a bit of a tricky question because I’ve technically been making art since the age of eight. I’ve just never stopped from that point on. But I would say I’ve been taking art seriously since last year, in my senior year of high school. Probably because I decided to make this big decision to study the visual arts, which isn’t an easy decision when you are a woman of color with immigrant parents. You feel more heavily the stress of succeeding in life, compared to [the stress others feel]. You’re constantly reminded of your parents, who came to this foreign country so you could have a better future. Deceiving that effort really is one of the scariest things.

You mainly draw portraits of women of color, positioning them as heroic, unapologetic, and content within natural scenery that heavily features fruits, florals, and greenery. Are the natural elements a nod to Frida Kahlo? What do they symbolize or communicate?

I’ve had my work compared to Frida’s a few times, and I’m always so flattered. She’s one of my biggest inspirations, even though I could never get to her level of artistry. The emotional delivery in every single piece that she did is insane. I see natural scenery as a way to create a brand new universe in every piece I make. Because all of these women deserve to be represented as ethereal beings responsible for their own realities. Also, it’s just fun to create so many universes and different, beautiful scenes with my own twist. I just recently discovered my love for landscapes. Including them in my art really has helped me create places that I hope scream “female empowerment” and create a certain peace of mind for viewers.

You mention drawing on ideas and experiences of black girlhood in a lot of your work. What does this mean to you, and how does it manifest in your art?

Black girlhood is often seen and represented from a third-eye point of view, and not from the source. I thought it was important to create that content from my perspective, which is the one of an actual young black woman of today. Also, it’s essential for me, a black woman, to create art for other black girls like myself. I really see it as a duty almost, because it is.

A number of your works tackle the rife sexualization of women of color in the media, and the double standards and discrimination placed on women of color in the pornography industry. What were the injustices you identified in your research? In what places do you believe change should take place?

The problem resides in the fact that, for example, my body is going to be objectified and sexualized more often in everyday life because of my racial background. But when my body is being “worn” by a woman of a lighter skin tone, it becomes beautiful and wanted. Why? This is a one of the greatest double standards in our society today. Social media and celebrities are really appropriating our struggles and just ignoring everything that comes with it. They say everyone loves black people, but no one really loves black people. But it’s not only black people obviously, sadly. Sexualization doesn’t stop at only black girls; actually, east Asian women are probably one of the main targets of this pornographic objectification, especially today. Which is also very important for me to tackle in my work, if just only to show my support to other women of color. They’re really like sisters to me. I like to think of other women as my allies because they are. But there’s a fine line between appreciating someone’s culture and just plainly appropriating it. 2017 is definitely the year for people to just go on social media and pretend to be woke, waving around in their captions all the important hashtags of the hour, like #blacklivesmatter or #findourgirls. But you’re not going to see all those people in marches or trying to actually do something to change those situations. It’s sad that social activism has become a trend.

Your portraits feature a mixture of celebrities and fictional characters you admire, people close to you, yourself, and sometimes those who remain anonymous to your viewers. On your Instagram, all these people are treated as equally important and portrayed with the same reverence and magic. It seems like the people you choose to draw are your “family,” whether symbolically or rooted in reality. What compels you to draw someone?

What compels me to draw someone has to do with what kind of vibe or color I get from them. I think we all have our own colors to begin with. We are all our own unique individuals. I don’t even look at beauty because beauty is so subjective and abstract to me, honestly. It’s just about knowing if that person has a story to tell or a message to share with the world. Someone who’s real and just plain raw is often going to get my attention more. People who stay true to their nature and own their quirkiness are probably my favorite subjects. What kind of artist would just feel satisfied with painting over and over the same pretty faces with no context or story whatsoever? That’s just plain boring. Next.