Why Can’t I Be You: Afia Yunus

The immigration lawyer talks about using her degree to help others. 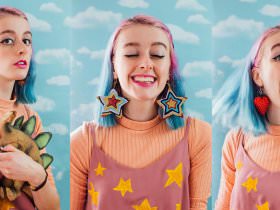 How to Turn Trinkets Into Earrings 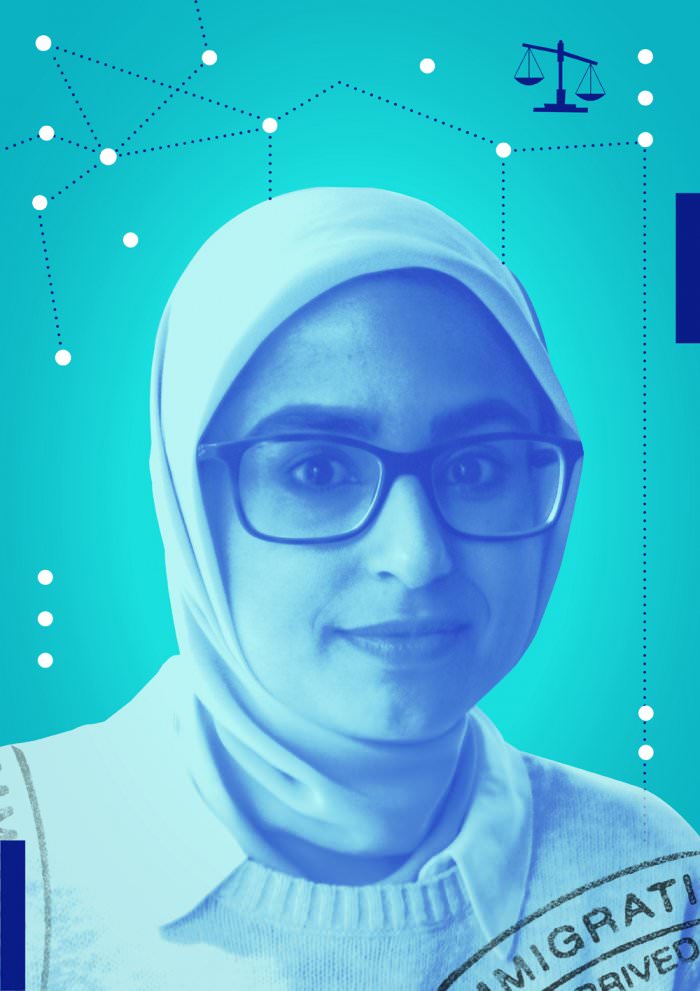 In the beginning of February, I had the opportunity to attend a fundraiser dinner for a local family of Syrian refugees. Among the good food, friendship, and conversation prompted by the hosts was a Muslim woman who addressed the crowd. In a room full of people, Afia Yunus spoke passionately and confidently about her work as an immigration lawyer, her life, and Donald Trump’s January executive order barring entry into the United States for people from Iraq, Syria, Iran, Sudan, Libya, Somalia, and Yemen. I absorbed every single thing Afia said, and left that dinner feeling more inspired and informed than I have in a very long time.

Afia Yunus is the daughter of two immigrant parents, a mother of three children, a wife, and a Muslim woman practicing immigration law. She has dedicated her career to the founding principles and values of the United States, and she confidently defends these constitutional rights in her everyday life. Afia graduated from the University of Illinois with her B.A. in Criminal Justice and Political Science, and attended law school at Chicago-Kent, finishing with her Certificate in Public Interest Law. After establishing her own practice in Chicago, she expanded her work and opened an office in Philadelphia. I sat down with Afia over coffee and spoke with her about her job and how we can challenge the current administration.

LAUREN TEPFER: First, I wanted to thank you so much for your time! I am so excited to be speaking with you. Could you tell me a bit about your job and the responsibilities you hold as an immigration lawyer?

[Laughs] It is a lot! On the side I also work in a lot of speaking engagements, trainings, and workshops. So it is a lot, but I love it. That’s really important. I tell everybody this: that if you love what you do, then it doesn’t feel like work. I look forward to waking up every day and doing what I do.

Yeah, yeah! I always wanted to use my law degree to help people, and I feel like the field I’ve chosen is perfect for that.

What sparked your interest in becoming an advocate for immigrants?

It was a few things. Number one was that I am a part of a marginalized community, and when you’re a part of this kind of group you naturally have that inclination to help others, right? I was given the opportunity to be empowered by becoming an educated attorney and so I felt an obligation to do that. A lot of it was sparked by 9/11. I was 15 at the time and just the backlash that happened after the event toward Muslims—I was just like, OK, what can I do to help? I decided to get a law degree. I initially wanted to do civil rights, but it just naturally fit to do immigration work. I’ve learned to really appreciate and value the immigrant experience that even my parents went through, and realizing how close I was to that. I just wanted to advocate for a community that usually doesn’t have a voice.

Are there many similar law practices in the area where you work?

Yeah, there are. The reason I started my own practice was because I felt [that] a lot of the clients I had dealt with previously had been taken advantage of. I offered something different—I come from a similar background and I can empathize with their experience.

When you spoke about the immigration process at the event, I was like, Oh my god!, because you were totally myth-busting all of these falsities. Everyone was so shocked! What are some of the most common misconceptions you hear regarding immigration?

One of the biggest misconceptions is that most immigrants come through the land border, which is not true. The majority of undocumented immigrants in the U.S. are here because they overstayed their legal visa. Another one is that there is no vetting process, that all immigrants just come here on a whim, but it’s actually a very time-consuming process. Most immigrants require an interview and an application. When you’re going to get your green card you have to go through a medical exam and you have to be fingerprinted. It’s constant, you know? It’s not something where you just come and get a green card. There are so many different steps, and it’s really a long journey for someone to become a citizen.

How many years, usually?

So, a typical path is that someone comes on a student visa. They’re here for college for four years and then they may find a job and do OPT, which is like practical training, for around a year or two. We’re already up to six years. Then they can find an employer who’s willing to sponsor them and then they have to file an H-1B, which they can sit on for six years. Finally their employer can say they want to sponsor them for a green card, and that process can take around one to three years.

So, that’s just a green card after nine years! And then to become a U.S. citizen, you have to have a green card for five years unless you’re married to a current U.S. citizen. It’s a long, arduous process. It’s tiring mentally and extremely anxiety-ridden. It’s not easy. That’s one of the biggest misconceptions, that these immigrants have an easy, luxurious life, which they don’t! They struggle on a daily basis—that’s what I’ve encountered a lot. They’re not manipulative criminals. They just want a better life for their family! Who’s to say they shouldn’t have that? What’s the difference between me and them? My parents happened to come here, but one generation ago I could’ve been in a foreign country. We just need to empathize, as a whole, more with the immigrant experience.

Talking about the immigration ban—whom does it specifically affect?

As it was first written, it specifically affected green card holders and any type of visa holders from the seven countries, which are Muslim majority. It affected them because they couldn’t come to the U.S., even though they had validly issued visas. It also affected Syrian refugees. They were permanently banned from coming to the U.S. until the president deemed otherwise. It also affected almost anyone in the world who wanted to come to the U.S. as a refugee, because it stopped the refugee assistance program for four months. Although, you can’t just seclude it to those people because it really affected the entire Muslim community. During that time period, U.S. citizens who were coming in were encountering discrimination and harassment at the airport. That was a direct result of the climate the executive order created. As time went on, they did exclude green card holders. Now, it only affects visa holders who are from those seven countries.

What do you have to do while all of this is happening?

I have to constantly stay informed, which is hard. It’s so unprecedented—so much is happening so quickly. This is my field, so I feel an enormous responsibility to help, especially in this time. I have to stay on top of it. [Laughs] I’ve been doing more legal research in the past two weeks than I’ve done in a very long time.

Do you find it hard to separate yourself from your work? Do you try to not get involved in the emotional aspect or do you just let it be?

The first week I had whiplash. It was shell-shocking. The overload of work and dealing with the personal emotions and the fact that I am a Muslim woman and so this directly affects me and my little children! I’ve always been good at compartmentalizing. Once I put on my advocacy hat I was able to get focused on making positive social change. This is what I’m meant to do, this is my calling. I told my friend it’s like the part in the Eminem movie 8 Mile when he sings the song “Sing for the Moment.” That song has been on repeat in my head! I feel like this is the moment that’s been placed on me. I feel like I was chosen for this.

I imagine it’s hard to separate yourself from your work, especially when you’re so passionate about what you do. The work that you do is so heavy and emotional—it’s a part of you. Maybe separating yourself from that would make the work less valuable.

Absolutely. That definitely translates when I am talking to my clients. When I’m speaking to anyone who is asking me about the ban, I explain that it is very personal to me for two reasons. Number one is obviously because I’m Muslim. But I’ve also dedicated my career to the laws of this country. I’m passionate about the founding of this country and the constitutional principles that we stand on. That’s what really gets me, when these principles that I value as an American are used against me.

Since the executive order was released, how have your job responsibilities changed or increased?

My responsibilities have significantly increased. I have waived my consultation fee on questions regarding the Muslim ban. I get somewhere between 20 to 50 inquiries a day. Because of fear of what’s going to happen to green card holders, a lot of people want to file for naturalization. Also, the call to do trainings and workshops about knowing your rights has been increased, too. I’ve been speaking at different Muslim community centers and colleges. My legal work has increased but also a lot of my outreach work. I believe knowledge is power, especially when it comes to your legal rights. Everyone right now, specifically Muslims, needs to know that they do have rights even if someone is telling them they don’t.

How would you encourage young people to get involved in the resistance against the executive order? What are some actions we can take, locally and globally?

Locally, what I’ve been telling a lot of people is to pressure your officials to declare the city a sanctuary space. What that means is that your law enforcement and local police won’t willingly give information to ICE [Immigration and Customs Enforcement] regarding certain individuals. At this moment, rely on your local and state officials. Speak out! Contact local organizations! If you’re good at art, use those powers! Now more than ever you can’t stay quiet. Silence is acceptance. We as a community need to demand compliance with what our constitution says. Young people are so powerful because they’re energetic and passionate. Their actions often have a greater impact because they’re young and they’re our future. This is the moment, this is your moment.

That is definitely what keeps everyone going. We can make change!

Yes! What happened after the executive order was so historic. We had floods of people going to the airports, offering their services for free, chanting, and protesting. It’s going to go in history books. Do you want to stand by and watch it happen, or do you want to be a part of that change? ♦