“You’re never going to be too old to be creative.” 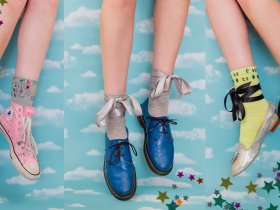 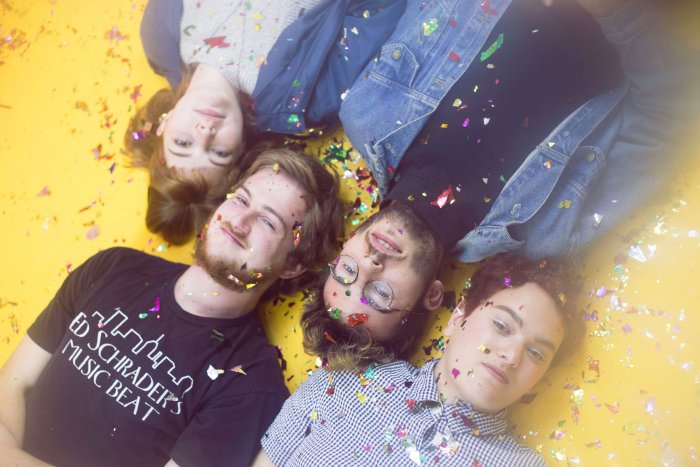 When Stephanie Knipe sings on Adult Mom’s forthcoming album Soft Spots, the underlying emotion is calmness, whether the song is carried by soft guitar strumming or quick percussion. Today we’re premiering “Full Screen,” a song from Soft Spots that is as soothing as it is upbeat:

Stephanie started Adult Mom as a solo venture, uploading songs to Bandcamp. Eventually the project gave way to collaboration with friends and live performances with a full band. Soft Spots comes out in May, and Adult Mom will be on tour this spring and early summer. Last week, I chatted with Stephanie on the phone about their ability to distill such a feeling of gentleness in their music, their time studying at State University of New York at Purchase (aka SUNY Purchase), and how they got their start in music.

RACHEL DAVIES: Soft Spots seems to be decidedly working toward a theme of softness. How does it compare to your previous release, Momentary Lapse of Happily?

STEPHANIE KNIPE: Well, thank you for noticing that—that’s really cool! I worked with the same engineer, Mike Dvorscak, on both records. The first record, Momentary Lapse of Happily, we basically live-tracked most of it. The most important thing to us, for that record, was that it sounded organic and not over-produced. For this new record, we were really focused on making it feel more intimate, like I’m sitting next to you, not, like, yelling at you. We room-mic’d a lot of the amps and vocals, so I was never actually singing into a mic directly. I was just singing in the room, which is awesome.

What was your experience like at SUNY Purchase? It seems like such a hub of great young musicians, but I’m wondering if that is intimidating or inspiring.

Yeah, it’s funny. It’s really nice knowing a lot of other artists who went there. I’m proud to know that I went to school with Mitski and other people. Because it was, in a way, an artists’ community. I had the best experience at Purchase, definitely. I would not be writing, and I would not be who I am without that school, for sure. A lot of it has to do with other people writing, and recording, and performing, [which] was super influential. I say this in like every interview, but Elaiza Santos from Crying and Rachel Gordon from Baby Mollusk are the reason I started writing because I saw them perform.

Did you spend a lot of time working on music growing up?

No, actually. I didn’t start playing guitar until I was 15. I’ve been a writer for a long time. In middle school I was so into fan-fiction.

What did you write fan fiction about?

Oh god, this is getting real too quick. [Laughs] Let’s see, I had kind of a popular one about Joe Jonas from the Jonas Brothers.

What kind of antics did he get up to? Like what did you write about?

Let’s think…I was in love with him. I actually thought in my heart that we were going to be together. You know it’s never too late, though, to be honest. We keep getting closer and closer. [Laughs] The story was that I was his family friend, and we went on vacation together and we fell in love.

Did you listen to a lot of pop music back then?

Oh yeah! My favorite band in middle school was the Jonas Brothers. That was my shit. In elementary school I was just obsessed with Britney Spears and the Spice Girls. Then my dad showed me—he had one of those ’90s best-of discs, I don’t even know what they’re called at this point. Actually, maybe it was the 2000s, too, but it had, like, Natalia Imbruglia on it, that song “Torn.” I was so obsessed with that song. This was before lyrics were online, so I would play it 10 times in a row and scribble down every lyric that I could.

When you started playing guitar, did you play a lot of covers?

Yes, that’s how I learned! I covered every Bright Eyes song and every Rilo Kiley song that I could find on Ultimate Guitar.

What’s it like taking super-intimate songs and being vulnerable with them onstage?

With the band it’s a little easier. I have a lot of noise surrounding me. It kind of feels like I’m supported, like the noises are people saying, “It’s OK, you can share this.” It’s way scarier playing solo shows because there’s no cushion. It’s just like, OK, here I am! Take it or leave it!

When you started Adult Mom it was just you. How did you find people to work with, and how did you know they were right for the project?

My friend Mike was my year [at school], and we were friends. One day he approached me in person and said, “I really like your band, I’d love to see what we could do together, and I’d love to record you.” He was a production student, and he wanted to practice and see what would happen. I really liked his work—he has a great solo project that he records—and I was like, “Yeah, I don’t care, let’s go!” We’ve been working together ever since, for three or four years at this point.

Wow! When you were talking about how you recorded Soft Spots through the room mics—was that like a technique you learned at Purchase?

That was more Mike. I don’t know if he learned it in class, but it was his suggestion. I don’t know much about production, so most of the sounds are Mike’s influence.

Music school just seems so elusive to me! [Laughs]

Yeah, even as someone who went to that school, I just don’t understand it. [Laughs]

This was a few years ago, but one of my favorite projects of yours is Boy Tears and the different compilations you released under it. Could you talk a bit about that?

Yeah! I started it as a compilation that would highlight trans musicians and femme and women musicians. At that point, my scene was all boys. As an artist, I wanted to have a network of people who were like me, that I could work with, and hang out with, and talk about art with. I started sending out these random mass emails. Amazingly, a lot of people submitted. I think I did three or four [comps]! That’s how I met Katie from Free Cake for Every Creature, and now we’re planning a tour together.

Something that I find really interesting is this album’s strong associations with femme aesthetics—like everything is so pink and whatnot. Do you ever try to actively work toward not being mis-gendered, or do you just produce what you wish to?

Yeah, I mean, I feel like I’m rarely gendered correctly as an artist. I don’t know, it’s so complicated. A lot of people are like, “OK, queer musician, but female-fronted.” People can’t understand that there are multifaceted identities. It’s strange. It’s definitely a worry, but I’m pretty used to it at this point. I wasn’t even thinking about that when we were deciding on the artwork and the aesthetic and everything else.

It’s one of those things where you just have to do you, and try to not worry about what other people are thinking, or how they’re responding to it.

Yeah, ’cause I love being femme, and it’s a huge part of my life, so screw it! This is my art, you know.

Definitely! Do you have any advice for young musicians who are maybe worried that it’s too late for them [to start learning to play music]? When I was in high school, I thought I was too old to learn to play the bass because everyone I knew who played an instrument started when they were super young.

Oh my goodness, yeah! My advice is to just do it. If you really want to do it, you can do it whenever you want. You’re never going to be too old to be creative. Focus on what is important to you. If you want to create because you want to create, then do it. Really find what it is that you’re interested in. If you want to sit and play shitty Bright Eyes covers all day, do it! That’s what I did, and I was happy with just staying there. ♦