“This aria relates to the current political time in that the country is not satisfied.” 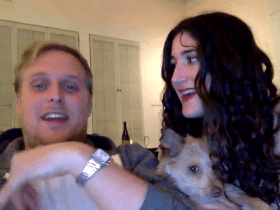 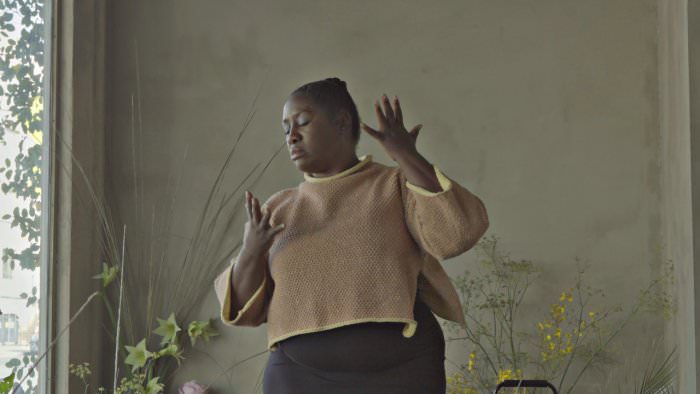 “You can take an opera story and put it in any contemporary context, and it would be relevant for today,” says Melony Matthews. Matthews—an actress, dancer, and opera singer—appears in this quiet, lovely video collaboration with fashion house Eckhaus Latta and the director Alexa Karolinski:

In the video, Matthews wears a lush, light-brown turtleneck sweater and lovingly sings the classic “O Mio Babbino Caro” from the opera Gianni Schicchi by Giacomo Puccini. The song, a simple aria about a young girl who pleads to her father about her love for a young man, is relevant to our political moment. I spoke with Matthews about her background, working with Eckhaus Latta, and why opera will never be outdated.

BRITT JULIOUS: What inspired you to become an opera singer?

MELONY MATTHEWS: I’ve been singing all my life in the church, but I was never considered a real singer in the family because I come from a Southern Baptist background and my family are gospel singers. I was never in the top rank in my family of singers. When I went to college, I majored in drama. I graduated at 20 and went to the Ailey School to perform as a modern dancer. I decided to take voice lessons so I could be a triple threat. I did an open mic one night because I was broke as a student. I got booed on the stage, and I was so heartbroken and devastated. I thought, “I know I’ve got a voice. I know I’ve got some kind of voice.” That’s when I went to my voice teacher and told her about getting booed. She said, “Maybe you should try a repertoire that’s closer to what your natural voice is inclined for.” I asked her what that was and she said, “Why don’t you try a couple of things and see?” I thought about my favorite things to sing and one of them was from Cinderella. She said, “Why don’t you go in that direction?” And I asked, “What is that?” and she said opera. So I gave it a try. I discovered that I really loved it and it was a medium for all of me. I don’t mean physically. I mean me as a performer. I’m very grand in everything I do. It was the perfect medium for me to be as big as I want to be. I took the suggestion and it’s been one of the best decisions I ever made.

How has opera changed you as an artist?

[Opera] taught me my vocal abilities. It taught me that I can express my feelings and that I am able to own my feelings. It was a very big change for me to be able to allow myself to be vulnerable and for people to see that vulnerability, but not necessarily expose me as an individual. I am a private person, but [opera] allowed people to see that I put all of me into what I am performing. You can’t be an artist unless you allow for that vulnerability.

How did you connect with the filmmakers and Eckhaus Latta?

I collected money for the Salvation Army on the street. I got bored, so I started singing Christmas carols and my bucket just filled up. So after that, everybody sang or brought an instrument. It just grew into this big thing. I decided that since that worked so well, I would naturally just try street singing. I’ve seen it all the time and never connected myself to it. I wish I had connected myself to it earlier. I wanted to practice and to develop and break those bad habits I gained with 12 years in the chorus. The first day I got my permit to sing, I went on the street and looked at Third Street Promenade in Santa Monica. The unique thing about Third Street Promenade is that it welcomes street performers. I eventually went out there and I sang, and I have been hooked on it ever since. It is so fulfilling, and I perform every day, like a stage show. I choose sets that are standards, and I am developing my technique. I’ve been out there for about 18 months, and I’ve become a stronger singer. I’ve broken a lot of habits. I remembered a lot of things my teacher taught that I had forgotten. I also started singing at the farmer’s market and [Eckhaus Latta and Alexa Karolinski] saw me there in Hollywood. They said, “Oh my gosh! Would you like to work with us?” I was like, “Sure!” They were very cordial and very nice. We exchanged information. I think later on they came up with this idea for me. I’m just so grateful that they wanted a chance to work with me and asked to include me. It was a wonderful experience. I felt so honored that someone thought enough of my voice to want to put clothes on me that they made and have me prance around and sing.

The first thing I really felt was valued. I really felt like my work was appreciated. I think everybody says, “I don’t need your validation,” but that’s not true. We do need validation from certain people in certain instances and situations to validate what we do. I really felt validated that my talent was worth being in this project. Working with [the director Alexa Karolinski] was very exciting because she knew exactly what she wanted. She had a vision. She was precise, and I loved that. I love people knowing what they want to do and aiming for it. It was very professional, and I was able to sing and lose myself in the emotion of what I was singing. I love losing myself in the moment and Alexa made it so easy for me to be an artist and not be bothered with small things. It also gave me an idea that I’m not wrong in believing in myself. I have something to offer and that’s also a good thing. That was a moment where I was able to say, “Yeah, I am in the right business. I did do the right thing and I appreciate it and I’m going to be me.”

How did you decide on [“O Mio Babbino Caro”] for the video?

I offered them several things. They chose that because it didn’t have any religious connotations. And also, it’s a simple aria. The girl sings. She wants her love and she’s trying to plead to her father, saying, “If you don’t let me love him, I’m going to die.” Which is what young girls often feel with a young love. That is the song. It’s by Puccini. I chose this song because it’s a popular song. It’s not obscure. Even people who don’t listen to opera know the song. People could relate to it because they’re familiar with it.

Why do you think opera can still be relevant to young people today?

Opera deals with stories that aren’t old. It deals with love, jealousy, possession, sex, hatred, depression. It deals with all of those things that will never get old for as long as humans are still evolving. Young people should pay attention to some of the opera stories and see how they relate to what goes on with human beings today. They’re the same human stories told over and over again, and they work so long as humans remain human. I would say that this particular aria relates to the current political time in that the country is not satisfied with a lot of the decisions that have been made recently. There is a desperate need to do something about it. In the aria, she said that if she’s not allowed to love, then she will do something drastic about it. Right now, we’re not satisfied with some of the political decisions that have been made so we’re picketing. We’re going to the street. We’re saying that we are not satisfied and we are going to do something desperate to show our dissatisfaction. I think, in that particular aspect, the aria is head-on-point with the political climate today. ♦