How to Organize a Student Protest

There are resources all around you. 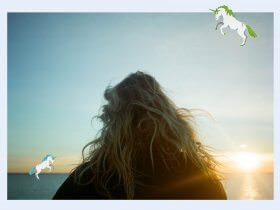 I can still feel the disappointment, hopelessness, and frustration I experienced the morning following the 2016 election results. That day began with me crying in the shower, then going to class and seeing my political science professor’s tear-streaked face, and ended with a College Democrats meeting. Once everyone in the group had aired their concerns, I asked what we could do. I’d spent the entire day mourning and analyzing the news for answers, and I felt the need to do something that could provide hope, even if my disappointment and worry persisted. The answer to my question was in the air but no one wanted to say it, maybe because it felt ridiculous. After all, we were a group of 15 first years, sophomores, and one or two juniors—what could we do to make our already-unheard voices heard? So, I said it: “Should we protest?” Everyone nodded and I caught a few grins. “Raise your hand if you want to protest,” I said. Hands shot up. A friend pointed out that we should act as soon as possible so we didn’t lose the momentous passion we were feeling. We protested the election result that same week. While we expected at least a hundred people to show up to our march, which promoted ally-ship and unity among historically marginalized people, we were greeted by a group of over 400. Just 15 college students were able to mobilize that many people to share their voices and demonstrate for a common cause.

This was not my first time helping to organize a student-led event as large and as ambitious as this. Grateful as I was for the way it turned out, I learned some important lessons and recognized the significant things I did, alongside my friends, to accomplish this. Whether you rally 20 people or a thousand, it’s the presence of likeminded people that really matters. Here are some tips for getting started:

Develop a goal for your mission.

Why do you want to mobilize people, and what is it that you are attempting to accomplish through their presence? Having a clear mission statement prevents people from being unsure or hesitant to show up. Create a Facebook event and provide your goals, perspective, and mission so when people do show up, they know why they and all the others are there.

Sometimes it’s easy to get lost in ambition and the desire to receive credit for your attempts to organize. Throughout the process, remind yourself of the reason you want to accomplish your goals. Recognize that the individuals working on this with you want the same thing. Acknowledge that sometimes it’s not about receiving credit, but about results.

Depending on your institution, make your administration aware of what you’re doing.

It’s nice to have administration on your side. Luckily, for the most part, the leadership I spoke to at my college was supportive of our march. We told administrators the route we planned to take, we reached out to the local police department to ask if they could block off certain roads for us, and we asked permission for a press release. Sometimes, though, administration may not be fully supportive. Pitch your idea carefully and thoughtfully. If it seems like there isn’t much support, remember that you still have the right to freedom of speech. If you feel like your right to free speech is threatened, there are resources you can reach out to. Ultimately, though, it’s important to make sure that the group demonstrates in a safe way. Include the importance of safety in your mission statement.

Your success in speaking to administration also depends on what you are trying to organize. A march or a protest is a very different thing to organize versus a walk-out. Talk to your group and fellow organizers and use your judgement to figure out which steps to take. Group decisions are effective because they involve different perspectives and raise questions that you may not think of on your own.

Get people on board.

I mentioned a Facebook event, but don’t limit yourself! Figure out a meeting location and a time and slap it on posters and fliers. Put these posters and fliers up around your community, in your public library, local coffeeshop, recreation center—you name it. If you have permission, and depending on the event, post fliers around campus, as well. Send emails to your local partisan organizations and get the members involved if you hope to have a larger turnout and impact. This is also helpful if you need donations. Spread the word on paper and on the screen.

If you’ve ever been to an event similar to the one you’re trying to organize, or if there’s one you read about online, contact those organizers and see what they did to mobilize. Taking tips from people who’ve had experience really helps to fill in those gaps you may be neglecting.

Get a donation box. 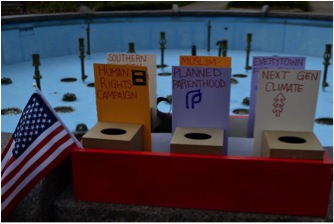 (Photo by my friend, Stella Fanega).

Whatever it is that you’re organizing, it’s helpful to have a donation box. My friend Reese put together a system in which different nonprofits had their own containers (made from Kleenex boxes—woohoo!) where people could donate money. Having a donation box is a great opportunity to raise money for the organizations you care about.

As a student, you likely have access to resources you need to mobilize, including teachers who are willing to help (and who are inspired by your drive!), peers and friends who care about what you care about, and of course, time (you know, that thing you have available between study sessions and binge-watching Netflix). I hope with these tips, you’ll inspire and motivate others to share their voices and unite for a common cause. Best of luck, friends! ♦