Angelica Garcia: The Devil Can Get In

“Sometimes when you get up close to something, it isn’t as scary as you thought.” 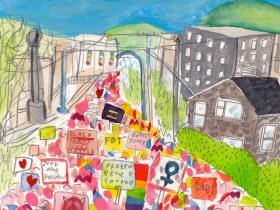 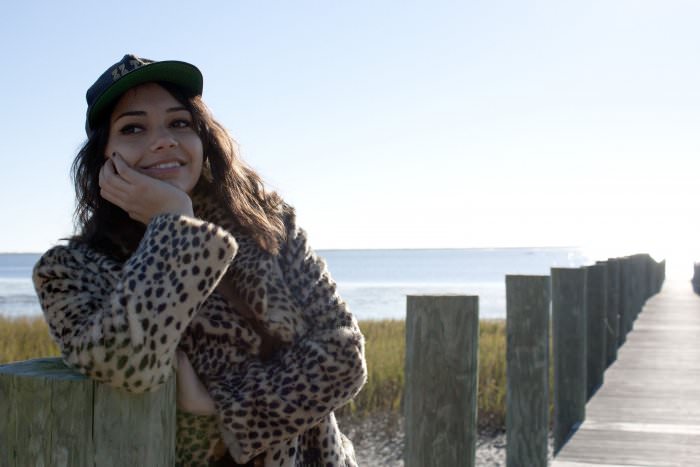 Angelica Garcia sometimes writes songs in a 200-year-old brick manor surrounded by picturesque magnolia trees. You can almost hear the setting in her music, which is equal parts goth and whimsy. Today, we present the terrifically spooky video for “The Devil Can Get In,” a track from her debut album Medicine for Birds:

I called Angelica last week while she was hanging out in a Mississippi barbecue restaurant. We talked about fear, and how it can be life-changing to come face to face with the things that scare us.

VICTORIA CHIU: I really enjoyed “The Devil Can Get In.” When I first saw the title, I expected to see something really scary. I was surprised to see a quirky, whimsical video with a cheerful tune that, at the same time, has veering-on-creepy lyrics. Where did the title of the song come from?

ANGELICA GARCIA: It’s kind of funny because that song—and this rarely, rarely happens—came together pretty quickly. I had been listening to a lot of Mississippi John Hurt in this old house I lived in on the eastern side of Virginia, which is super rich in old American history. The house was a station for troops in the Civil War. It’s a spooky, old kind of house. Then one day I started plucking my guitar, and that’s the first song that came out. It was one of those rare occasions where the words and the melody came at the same exact time. That hardly ever happens!

The song is about facing your fears, and this whole idea that the best way to do that is to openly talk about them. [The things you’re most afraid of] exist and are already out there in the world. Regardless of how you try to protect yourself or shield yourself from encountering those forces, they’re still around. That’s just the nature of life; it’s part of the human experience. That’s the meaning of [the line] “the devil can get in when your room is locked.” Thoughts and fears can be temporarily barricaded, but eventually you’ll have to confront them. It’s best to face these fears head on so you can move past them and live a life without them.

That’s a good philosophy to live by! When I first watched the video, I was home alone late at night. I had sequestered myself in my room—I had one light on, and I have a pretty severe fear of the dark. It’s very poetic that I was listening to a song about getting over my fears!

Yeah! Well, to be fair, it totally creeped me out when I first wrote it. I’d be home alone in this 200-year-old house, walking around and my parents would both be gone. It’s one of those tunes that would get stuck in my head, too. I’d be walking around and suddenly I’d start hearing the little “badoom-boom-boom” that shows up in the song over and over. But over time, I’ve come to embrace it, you know? That’s the whole point of the song. You’re going to have these things that creep you out, but it’s good to just look them in the face and know them for what they really are.

Right. It’s better to face your fears than constantly run away from them.

My point of view for writing is that I try not to force things. I used to have this mentality like, I’ve got to finish this song, I’ve got to finish this song. But now if I sit there and try to force it to come out, it’s not going to create a genuine expression of the meaning. It was really lucky for me to have all the elements of “Devil Can Get In” come together because a lot of the time, it’s the exact opposite. For “Loretta Lynn,” another song on Medicine for Birds, I had that song for about six months before I finally got the words down and coordinated it with the melody and everything. It’s very much on a case-by-case basis.

The visuals for “Devil Can Get In” are so striking. How did the look and feel of the video come together?

When I met the cinematographer for the video, one of the very first things I said when we were shooting around some ideas was that I wanted it to feel like I was walking through a haunted house—and it would be really cool to tie in some lyrics with real-time images in the video. We definitely tried to work in little nuances that integrated the visuals with the lyrics but also kept it fun and lighthearted. My goal isn’t to scare people for real! But it was my idea that I wanted the video to be blue, though. That was just something I really loved. I really wanted it to be blue.

Parts of the video seem to reference Día de los Muertos motifs. Was that something you consciously aimed to incorporate?

I guess you could say that. I definitely know that, because I saw plenty of Día de los Muertos stuff and a lot of Mexican folk art growing up. That contributed to the reason why, as an adult, I’m not really scared when I see a skull. I’ve never really thought that a skeleton is scary. To me, it just connects me to my own humanity and mortality. I love that about Día de los Muertos—and I love the idea that when someone passes on, they’re still happy and doing everything they loved to do in life. Maybe that’s where some of the playfulness comes from.

Yeah! Sometimes when you get up close to something, it isn’t nearly as scary as you thought it was. One big thing I learned when I was living on the eastern shore of Virginia after living in Los Angeles is that in L.A., it feel likes it’s mostly homes and towers and buildings. Then all the way across town, like an hour away, you have a massive cemetery. But in Virginia, every five minutes you pass a small cemetery. And a lot of people could see that as creepy—especially driving by all these graves at night—but I always thought it was kind of sweet. I saw it as your loved ones being closer to you. You don’t have to travel so far to see them; they’re closer to home. I think it’s easy for people to forget where they came from, and [cemeteries] are part of that—it’s part of the big circle of life, from my perspective. I like writing about that circle, the big picture. It’s my way of trying to figure out what things mean. That’s a good way of utilizing art: to figure out the meanings of things, the meaning of life and everything else. Art helps us discover the world for ourselves. ♦