We made serious errors. We are sorry. 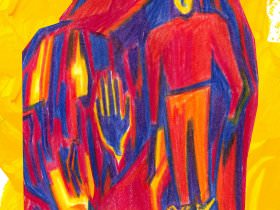 Update – January 27, 2017: Today Rookie’s editors removed the interview “You Can Stay Friends With a Trump Supporter” from the site. It is the first time we have deleted a piece in Rookie’s history. We are committed to being held accountable for our mistakes (see our apology here), and we do not support censorship. Our editorial team has been discussing whether to remove the piece since the day it was published (January 24, 2017); we take breaking from our position on censorship, as well as owning our errors, very seriously. In this case, we’ve concluded that the continued existence of this piece stands in stark contrast with our mission for Rookie to be a safe space. We want our contributors and readers to feel safe, and the language used to introduce the piece normalized what cannot be normalized. Additionally, the interview involved teenagers who are not at fault for our errors in editing and publishing it (which we detailed in our apology). As their editors we are responsible, and we do not want to subject teen contributors to ongoing criticism for mistakes we made in editing and publishing this conversation.

Here is a screen capture of the original tweet: 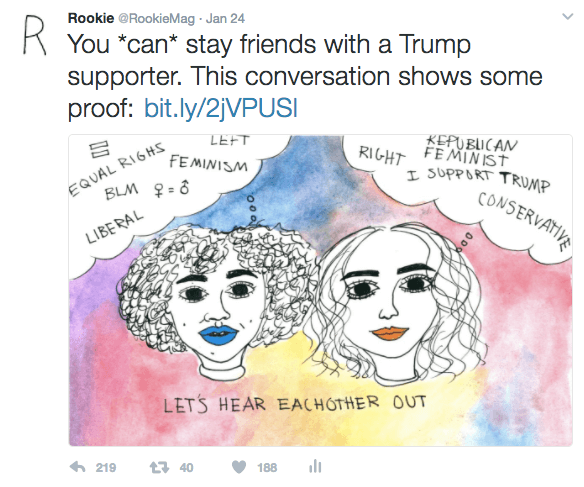 There were more than 200 replies and mentions on Twitter; the majority of the feedback was highly critical and included many calls for the tweet to be deleted. Some readers sent series of tweets offering detailed criticism. Here are two notable examples, posted with permission from the authors: 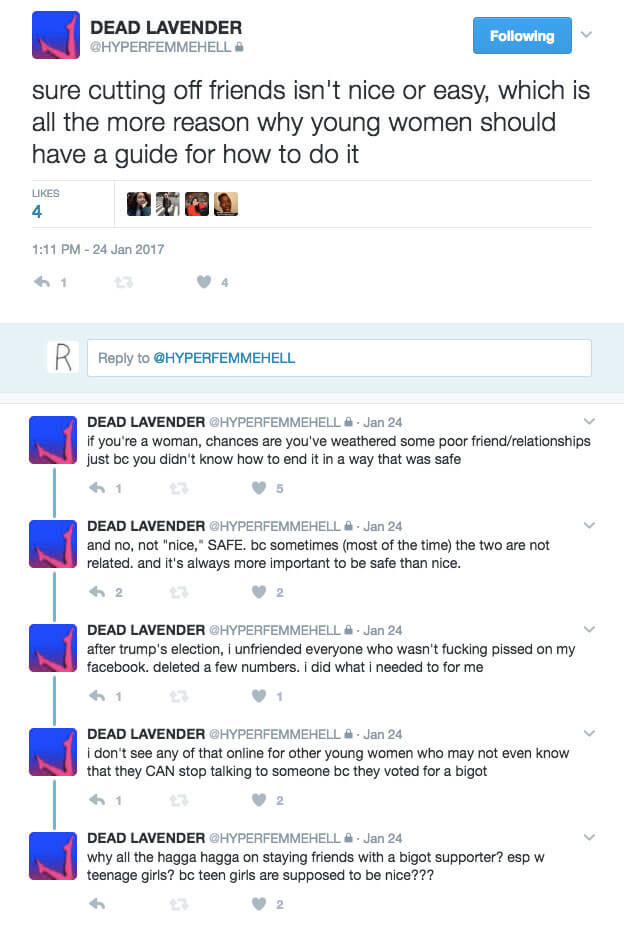 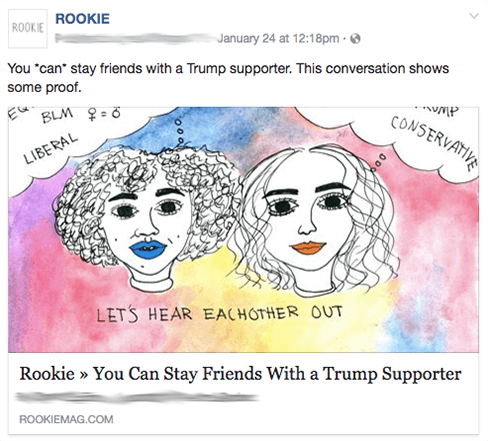 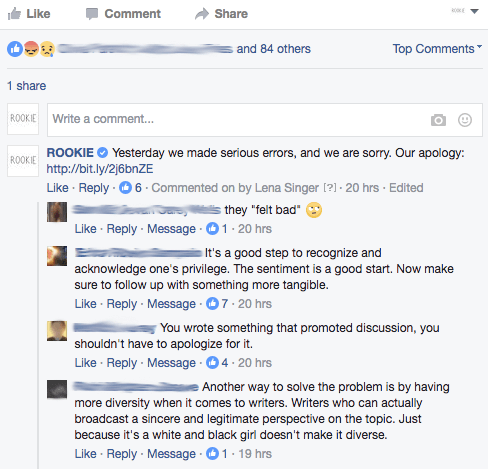 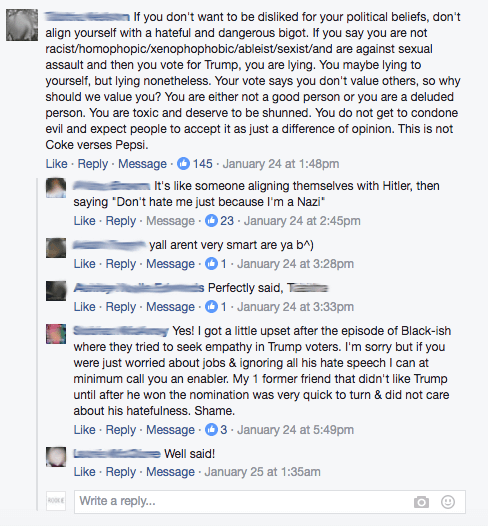 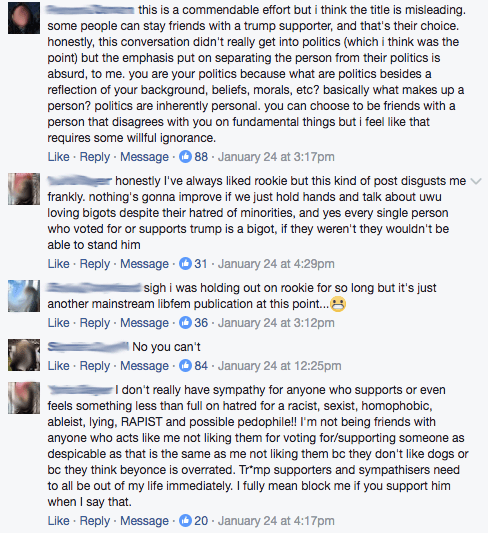 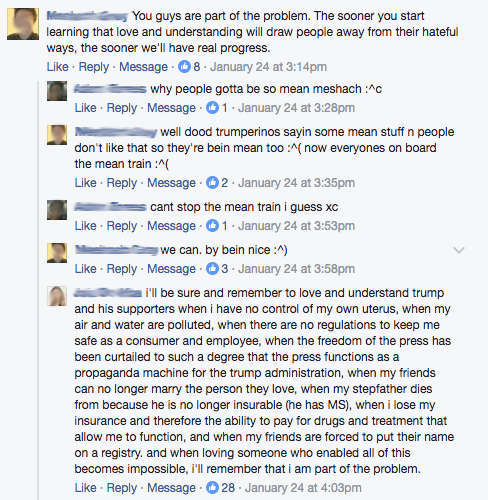 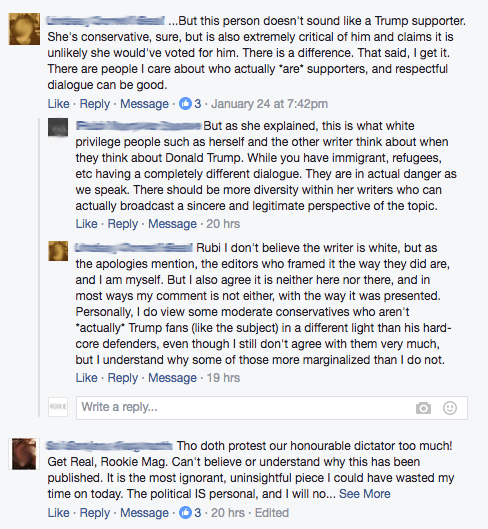 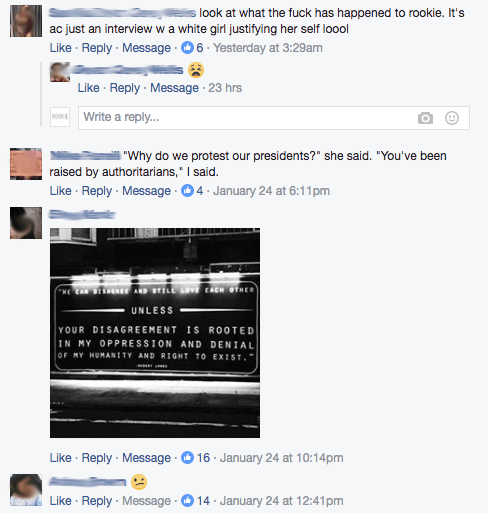 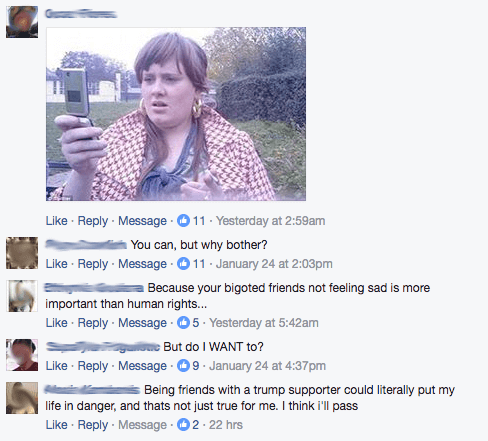 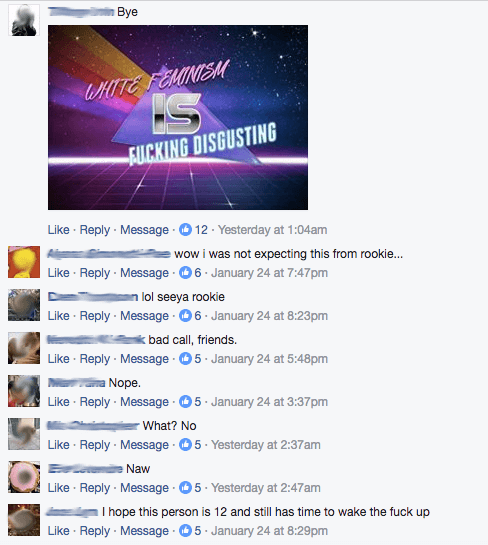 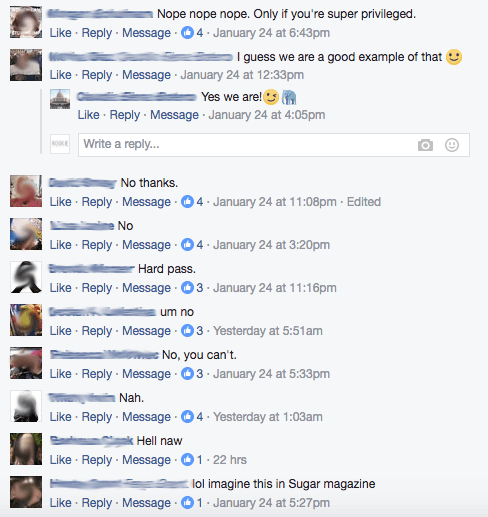 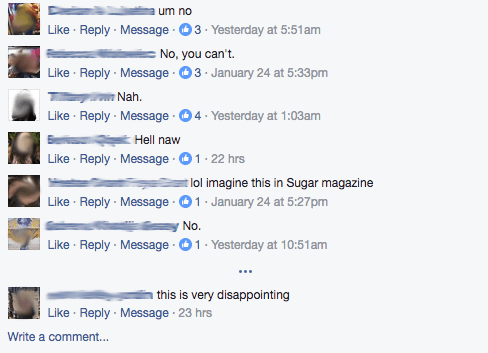 And all of the comments posted on the article itself: 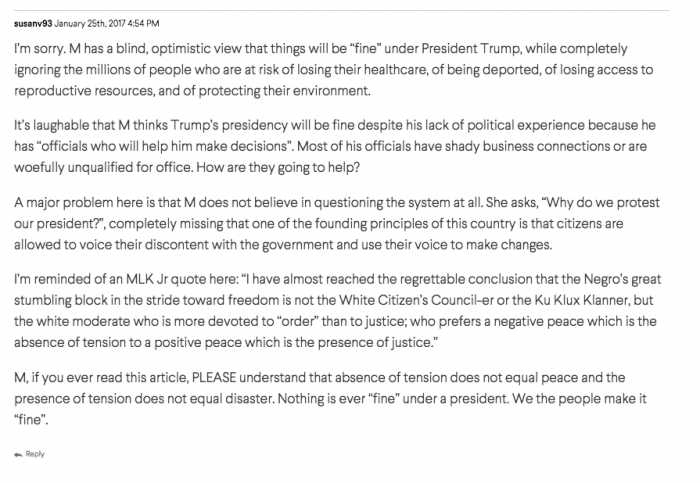 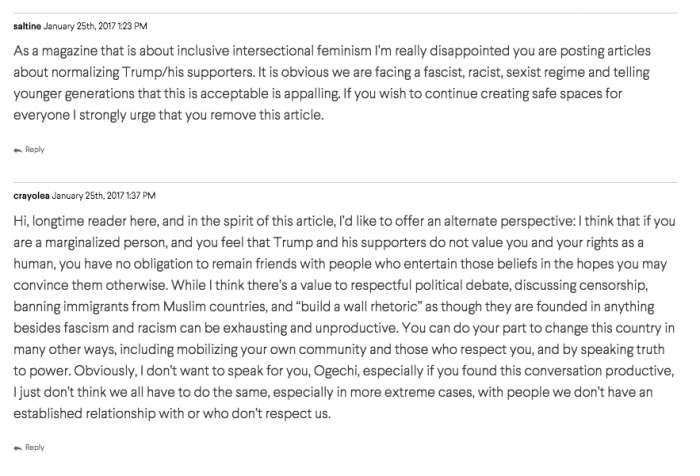 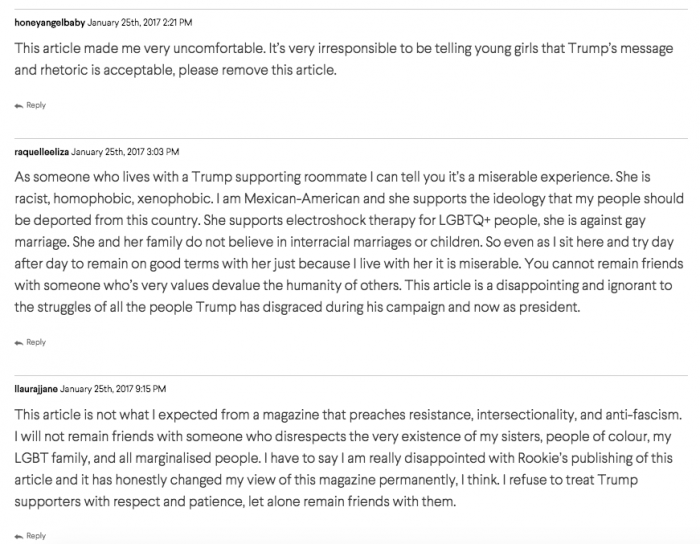 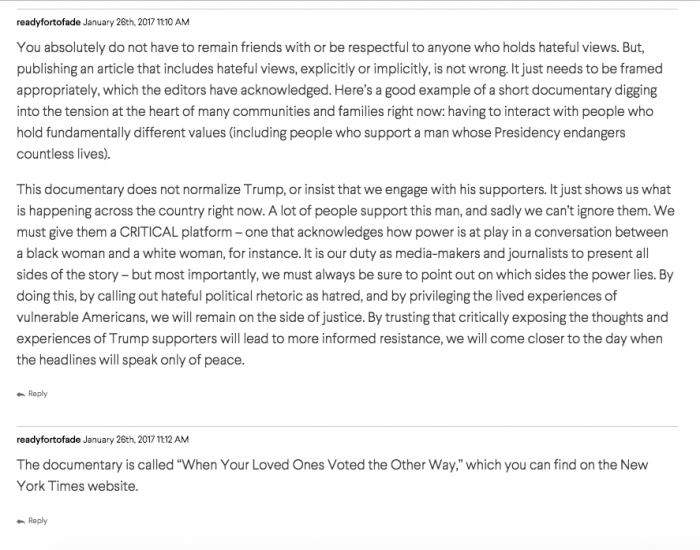 Thank you for your criticism, your comments, and holding us accountable.

January 25, 2017: On Tuesday, Rookie published an article—a conversation between two high school seniors; one a self-identified liberal, and one a self-identified Trump supporter—with a headline and sub-headline, plus social media posts, that stated the following: “You *can* stay friends with a Trump supporter. This conversation shows some proof.” The headline, sub-headline, and social media posts were written by me. I made serious, inexcusable errors. The anger they were met with is wholly deserved. There have been criticisms of the article itself, too, which I am responsible for as the author’s editor. She didn’t mess up; I did. In doing so, I let Rookie readers, the author, the article’s illustrator, and my colleagues down. As a Rookie editor, the question that guides my decisions is, “Will this make teenagers feel less alone?” Yesterday I failed, and I am deeply sorry.

The author’s discussion with her friend M. was an exploration of one person’s experience with one Trump supporter—not an absolute. It should have been stated as such in the article’s introduction, headline, sub-headline, and social media posts. There are many other problems with my choices for the piece, but a serious one is: My errors were made as a white, cis, straight, able-bodied, and documented citizen. I am privileged, and my safety and liberty are not under direct attack. I am also responsible for a grave omission: The piece does not mention that by the day, people—immigrants, people of color, people who are undocumented, Muslims, queer people, trans people, people with disabilities, Native Americans, poor Americans, and many others—are facing increasing, unprecedented threats from the president and his administration, as well as violence and harassment from his supporters.

As many of you have already rightly pointed out, no one has to engage with anyone who cosigns Donald Trump’s racism, xenophobia, Islamophobia, bigotry, misogyny, anti-Semitism, ableism, homophobia, transphobia, state violence, ignorance, or lies. Rookie rejects the normalization of the Trump administration, and so do I. My errors yesterday did not reflect that stance, or the respect and care I have for Rookie readers and contributors. I am sorry.

Hi, Rookie readers. As Rookie’s Editor-in-Chief, I apologize for my mistakes surrounding yesterday’s post. Supporting Trump goes beyond a political belief or platform; it is mutually inclusive with racism, xenophobia, Islamophobia, homophobia, transphobia, misogyny, anti-Semitism, ableism, fascism, state violence, bigotry, discrimination against all marginalized groups, and the rejection of truth. By giving a platform on Rookie to someone who does not oppose Trump, we were normalizing hate in a space I know so many of you turn to for the exact opposite. Like Lena, I am also protected by the privileges of being white, cis, straight, able-bodied, and a documented citizen. I didn’t account for how my privilege would inform my decisions. I’m sorry I was not vigilant about not normalizing the bigotry and discrimination that Trump not only represents but is putting into action, and that his supporters—explicitly or by association—endorse.

I’m sorry to everyone who was marginalized and/or hurt by yesterday’s post and by the language we used to share it on social media. I am thankful that you voiced your opposition, as much as I wish you hadn’t had to in the first place. Thank you for continuing to make Rookie a community where hate is not tolerated, and for showing me that I was making room for it. We are dedicated to our mission of making Rookie a safe space for all of you, and are having conversations about how to ensure that that is always reflected in the work that we do and publish.