The band premieres a sleek video for a chaotic song. 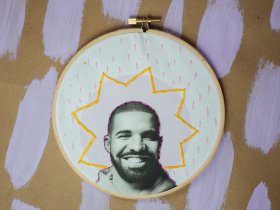 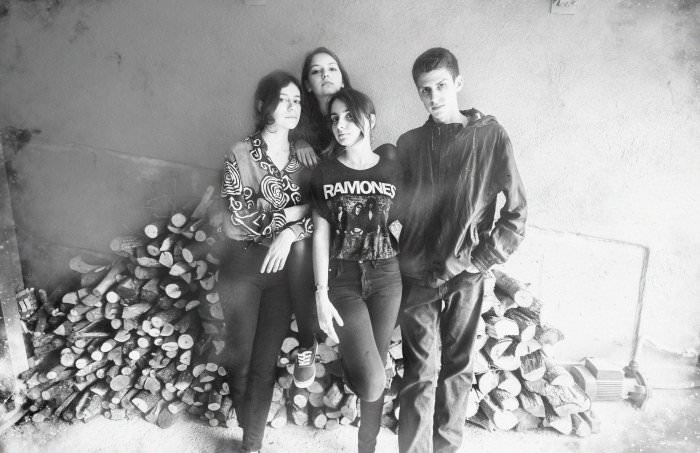 MOURN’s music is an expression of raw energy—harsh, loud, and intensely emotional. Carla Pérez Vas, Jazz Rodríguez Bueno, Antonio Postius, and Leia Rodríguez form the four-piece. They hail from a small town outside Barcelona, Spain, that they affectionately refer to as “Cabrils-fornia.” Today we’re premiering their latest music video, a sleek accompaniment to the chaotic song “Irrational Friend”:

Over the weekend, I skyped with Carla and Jazz to talk about friend drama and expressing emotions in a second language.

ANNA WHITE: We are premiering the video for “Irrational Friend,” from your album Ha, Ha, He! Have you worked with the director, Roger Guàrdia, before?

JAZZ RODRÍGUEZ BUENO: Yeah! All the videos we have are directed by him. We wanted him to keep doing our videos because we like how he works and his vision.

It’s a beautiful video! What was the inspiration behind the song?

JAZZ: It talks about a friend who, three years ago, just decided he wouldn’t be our friend anymore. He had a girlfriend who decided she didn’t like him having friends, basically. We spent a couple years without talking, and after we released this song he wrote to us apologizing about all that. He said he didn’t have that girlfriend anymore and that he was sorry. We talked a bit, and we forgive him, but it’s not going to be the same again.

That’s wild that he came to you after he heard the song!

CARLA PÉREZ VAS: After we released it, we talked about it in an interview, and he wrote to us on Facebook.

JAZZ: Yeah, because he read that the song was about him, and he felt guilty and wanted to apologize.

You speak Spanish as your first language, correct?

JAZZ: Yes! Well, Spanish and Catalan. I personally speak Catalan at home, but we Catalans speak Spanish as our first or second language, so we know them equally.

Why do you decide to sing in English?

JAZZ: I’m not really sure, to be honest. Maybe because we listen to a lot of music in English? Maybe it makes it more international, but that was not the intention. I don’t know how it came out this way. Maybe some day we’ll start singing in Catalan or Spanish, who knows. But if you start writing in a language, it’s difficult then to make the change to another one, because even though that’s your mother language, it’s like you express yourself in a way that, in your language, is so different. Some people who make this step from English to Spanish have this problem, and they have to write a lot to find their way. Or the opposite: If you sing in Spanish and try to sing or write in English, you have to make a change. It’s a different language and a different way to express yourself.

CARLA: I think English is easier because the words are shorter.

JAZZ: I think it’s different, not easier. But that’s why Spanish lyrics are so different from English lyrics. I don’t think there’s an easy or difficult. What you get used to is what you find easier.

Do you feel that the way you write or express yourself in Spanish is different than in English?

JAZZ: Yeah. It’s difficult to find the right words to say what you would say in your language, so you have to think twice. We need more vocabulary, which is why it’s good to travel. We can talk and learn and find out how to express ourselves. Singing in English when your mother language is something different, you’re telling what you feel and you are singing your thoughts and your emotions, but at the same time you are protecting yourself. It does not have the same meaning for you. You’re saying something but it’s not raw. It’s like a barrier. You are protecting yourself from feelings. Some songs, if we sang them in Spanish, we would feel the lyrics more deeply because we would be saying loudly and clearly what we think. We do the same in English, but it’s different.

Do you consider yourselves fluent in English?

JAZZ: We’re trying! I think we can maintain a conversation about almost everything, but it’s true that some days we are trying to find the words and can’t. It’s difficult sometimes.

CARLA: It’s all because of movies and shit.

CARLA: I think getting involved with the language also helps—read about the language, learn more.

JAZZ: And wanting to speak it! You can’t just go to class and speak the language unless you want to. They give you a base, but it’s not really strong. You have to speak and say things wrong to discover how they are said.

Is there anything you’d like to say to Rookie readers?

JAZZ: Do whatever you like. Don’t let anyone tell you what to do or what not to do. Do what you feel, and don’t let anyone tell you not to. It sounds really obvious, but it makes a lot of sense to me. Some people just treat girls differently because they are girls. For example, I was preparing for a show and taking my amp to the stage, and a man came and he wanted to help me because I was a girl—like I just didn’t have the strength to do it. I was like, “I have been carrying this amp for months! I don’t need you to come and think that you can help me.” Just don’t listen to people who tell you what you are or what you should be or what you should be doing. Fuck it. Do what you want.

CARLA: I would say treat yourself better. Don’t let people change you, don’t let people manipulate you. Love yourself. Accept yourself the way you are. If you do that, it’s easier to do everything else. Don’t listen to rude people. If you are sure of who you are and what your thoughts are, say whatever you want.