“I’ve always completely ignored what the media told me a woman should be, and I found my place in the world.” 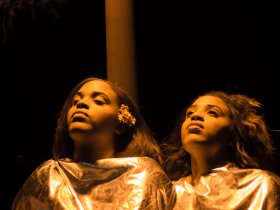 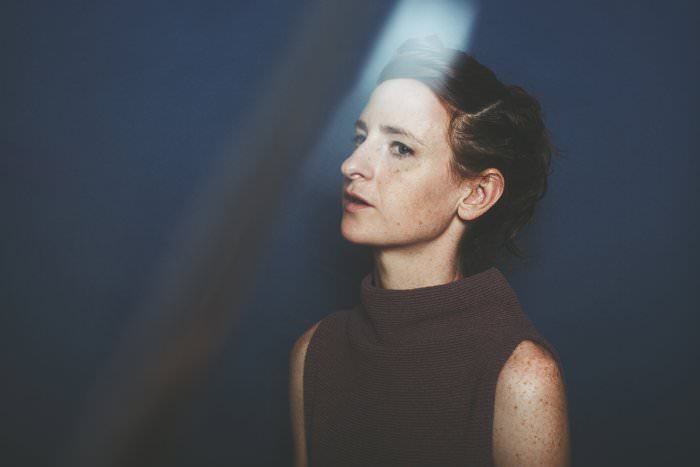 Katie Gately is an electronic composer for the new world. Gately’s music is both melodic and chaotic, a paradox that conjures mental pictures of a complex machine functioning at peak capacity. Listeners can sit back and marvel at Gately’s exquisite songs on her debut album, Color. Today we are premiering the video for Gately’s song “Lift.” Animated by Katie’s friend Louis Morton, it’s a look into a parallel universe populated by ominous, volcanic, egg-like clouds and medieval serpents:

Earlier this week, I had a chance to speak with Katie about her inspirations, the connections between music and philosophy, and what it means to write for her teenage self.

ANNA WHITE: We are premiering your video for “Lift,” from your new album Color. It’s a really beautiful video!

KATIE GATELY: Yeah, I love it! The animator, [Louis,] and I went to school together and he is just the most amazing animator. He uses such vivid colors, and it’s just very charming to me, his style.

It works so well with your music—it’s very abstract.

Yeah! I give him free reign when I work with him because I think his ideas are so much more interesting than anything I could come up with visually. He creates these worlds of abstract characters. It makes sense to me, but I wouldn’t know how to exactly describe it in words to someone else.

You two went to school together?

Yeah, he was in the animation department at [the University of Southern California]. The film school has many different departments, and I was [in] general production for live action film and he was [in] animation. We met collaborating on his thesis project and have been working together ever since. Anytime I have a chance to do visuals for music, I call him and see if he’s free. I hope to continue to work with him for many years and see where it goes! It’s really nice to have a consistent collaborator that you really trust.

Oh, that’s amazing! I saw that you studied both film and philosophy?

I did graduate work in film production and focused on sound design, and then as an undergraduate I studied philosophy. I was really interested in the aesthetics of music, why music moves us and how it moves us from a logical point of view, and looking at how we seek out darker forms of music and experience catharsis through them. I went really deep into this guy Peter Kivy’s work on the philosophy side of things. It always comes up as being somewhat relevant in understanding the way sound effects us, in many forms, in film and in music.

How do you think your background in both film and philosophy informs your composition?

You know, I’m not always very aware. Often I’ll work in a very stream-of-consciousness, almost physical way. It’s not like I’m thinking through concepts and working in a literal cause-and-effect, logical manner. Though I do think that everything I’ve studied and looked at has an effect, because it’s all being filtered through my brain. When it comes to choosing sounds, I’m really interested in how we associate certain sounds to certain memories. Like if I were to play you a sound from the house you grew up in—let’s say there was a clock that ticked a certain way or a bell that rang a certain way or your front door opened a certain way—that would trigger all these memories. I’m interested in finding sounds and building music out of these sounds that give me some sort of personal association and trigger. That relates to film, because the way sound is constructed in a soundtrack is meant to sneak in the back door of your consciousness and to situate you in an environment that subtly triggers memory or associations in the soundtrack of a film. I’m just very interested in how sound moves us and makes us feel a lot of different things besides being the abstract realm of art.

It never stops interesting me! That’s a lot of how the record came about—finding little samples that intrigued me and then structuring them in a more musical way with verses and choruses, trying to bring that abstract element into the more familiar realm of a pop-structured song.

Is “Lift” built off of any memories or feelings?

Well, this song is about staying a kid. When you’re in your twenties you think, “Oh god, I’m an adult now and what does that mean,” and I realized that I’m never going to stop being who I am, which is sort of childlike and playful. I want to stay that way as I get older, and so this song is an anthem for staying young and playful, no matter what age you are. I incorporated fireworks, which are one of my favorite memories of being a kid. My birthday is July 5th, and so every evening before my birthday there was an explosive firework ceremony of July 4th. I associate getting older and being a child with that sound. It was important to me that it would be the most prominent percussive element on the opening song. A lot of the vocals are not proper words—like la-la-las and do-do-dos, which is very childlike. There are also some stomping sounds and door-slamming sounds, which I thought were fun because those are other immature ways of making sound.

What were you thinking of while you were writing all of these songs?

I wanted to make something that was, in one way, more conventional in the sense of shorter songs—in the past I’ve done very long songs—but also more experimental with weirder sound sources and more intensified layers of percussion. Overall, I wanted to make a record that my teenage self would have wanted to hear. When you make your first record, it’s this experimental process of, “How do I want to exit the gates? How do I want to enter the world of my first full length?” I realized that I wanted my first record to be representative of this formative time in my life. It’s a formative time in my musical life because I’m sort of in my musical adolescence in terms of where I’m at in my career. I wanted my first record to be something that would have really excited me as a kid, particularly because when I was a young teenager I didn’t really see a lot of music technically being produced by women. I listened to other music that was really great, but I would have appreciated an intense, crazy record made by a woman when I was a teenager. This is a sort of shout-out to my former self.

I love that! There definitely are not enough prominent female electronic and experimental musicians.

I know! And the thing is, I keep realizing there are so many more than you think. They’re just not in the press! Every time I discover a new artist who is doing her own thing, I just get so excited that I’ll tweet about it and kind of go crazy. It’s exciting for me because even though there aren’t that many women, every year there seem to be more. Hopefully that is more visible now through the great websites that are more prominent, because when I was a teenager there weren’t as many outlets for featuring new artists. I think it’s getting a lot better. I want to yank more people into the world! If I meet a young woman interested in the music or sound stuff, I get way too excited.

What would you say to a young woman interested in creating more experimental music?

If I can do this, you can. When I was a kid I didn’t have any technical talent. Don’t be afraid of making mistakes because that’s what everyone does. Trust your own instincts and don’t try to avoid failure because it’s only going to help you and teach you along the way. If something seems hard at first, stick with it because it eventually will get easy. I really like to emphasize that to people because I was just so bad at math as a kid. Like I couldn’t have been less forecasted to be a producer as an adult. I like to remind people that if it isn’t easy right away that doesn’t mean anything. Stick with it if you’re into it.

That’s great! Do you have any electronic or experimental musician inspirations or people you think more people should know about?

A lot of the people I love people do already know about, but there’s a woman in Sweden, her name’s Klara Lewis and she’s a genius. She makes the most beautiful abstract sound-arty music, and then I love Laurel Halo who is in Berlin now and is just brilliant. I could go on. Every day I’m discovering someone new who I’m excited about.

Do you have any words of wisdom for the Rookie audience?

If you focus on your brain and what you can actually do and what your quantifiable skill set is in the world, you’re going to be OK. If you don’t want to focus on all the other stuff the media wants you to do, like straightening your hair and whitening your teeth. If that’s not your bag, then you’re going to be OK. I’ve always completely ignored what the media told me a woman should be, and I found my place in the world. ♦