How to Make a Celestial Crown

Wear it to parties or as an everyday look, you winter star. 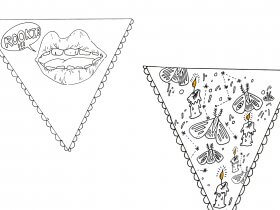 It’s super easy to get into a routine of wearing just about the same thing every day—especially when the weather is cold and mega dreary! Sometimes the only solution to a wardrobe rut is to add something new and fun into your accessory box, like a super glitzy celestial headpiece. Wear this crown to holiday parties or as an everyday look, you emboldened winter star. 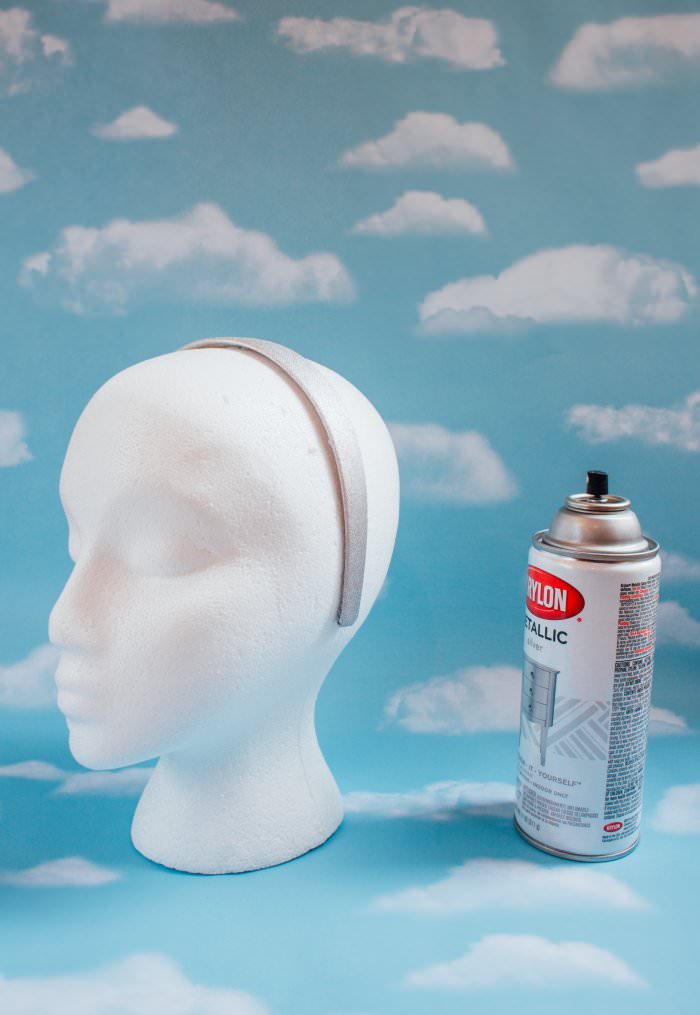 Spray paint your headband silver and let it dry. This will be the base of your headpiece. 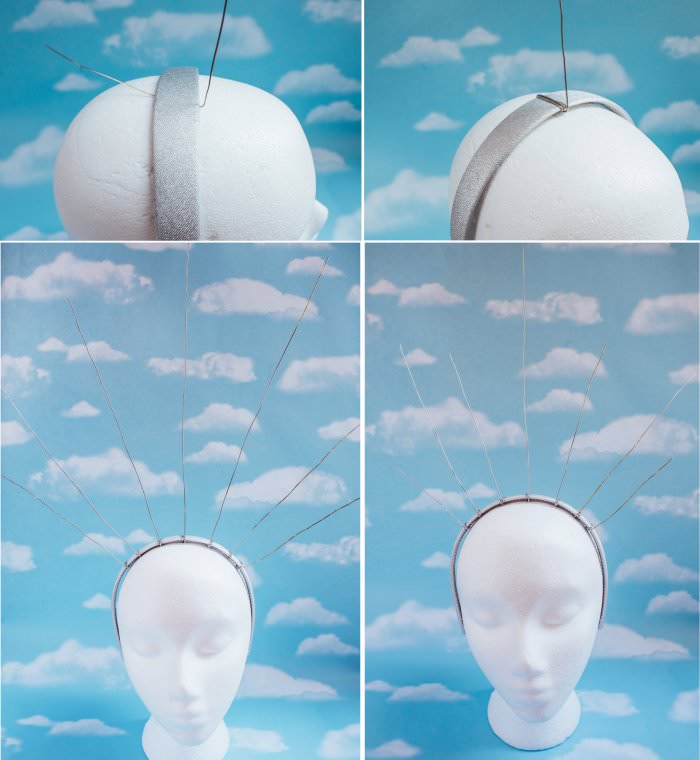 Create the armature for your headpiece. Start out by cutting a long piece—about a foot or so—of your thick wire and tightly wrapping one end of it around the middle of the headband. It may be helpful to practice a couple of times so that your final wrap is neat. Using a pair of pliers, tuck the sharp end of the wire away from the under-side of the headband. (You don’t want the wire-end scratching your scalp.)

Repeat this step with six more lengths of wire at equal distances from each other. Trim the wires at your desired heights. I alternated mine short and long. We’ll refer to these pieces as rays from now on, so we don’t confuse them with the other wire we’ll be using!

Cut a long piece of thin wire. Two feet or so should work. Wrap it around the far left ray. Carefully pull the thin wire toward the next ray, wrap it tightly around the next ray about four times, and repeat until it looks something like the photo on the right.

Trim the wire and use pliers to press down the sharp edge. It doesn’t have to look perfect, as this is just the base and won’t be seen in the final product!

Repeat this step about an inch above the last one, so that you have two roughly parallel wires intersecting the rays. 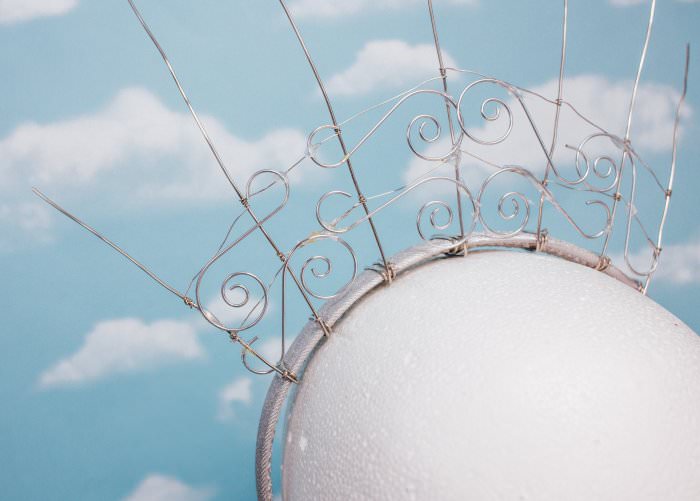 Take a few of your ornament hooks and hot glue them over the thin wires. This will give you something to stick your gems and sequins on later, but it will still look pretty peeking through. 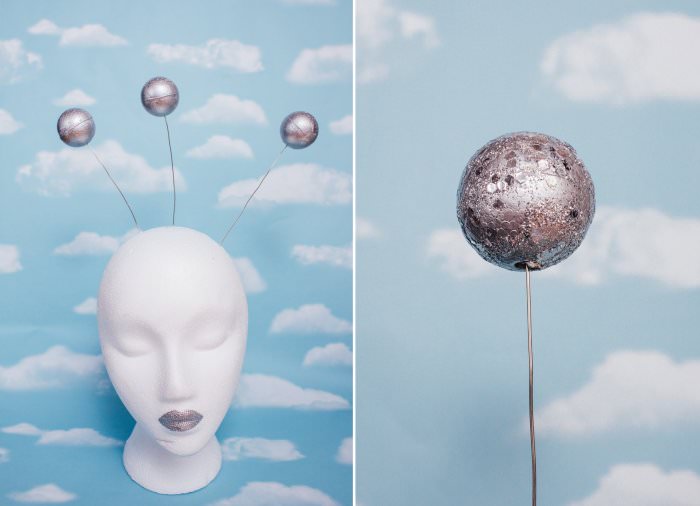 While that’s drying, put a coat or two of acrylic paint onto the styrofoam balls. I stuck mine onto a wire and then into the styrofoam head so that they wouldn’t roll around. If you’d like to add glitter (I say do it!), paint stripes of Mod Podge onto the ball, and then sprinkle some glitter on top of it. Repeat as needed, and paint a layer of Mod Podge when you’re finished decorating to seal it all in.

Gather everything (EXCLUDING ANYTHING STYROFOAM! Spray paint melts styrofoam!) that you’re planning to stick onto your headpiece that isn’t silver already, and spray paint it all silver. Once it’s all dry, flip each piece over and spray the backs, too. I sprayed all of my non-silver star gems.

I also chose to cover a few of the gems in glitter by painting them with Mod Podge and sprinkling glitter over the top. Once that’s dry, put a layer of Mod Podge on top to seal it.

Now we’re going to combine everything! Start with the biggest gems and glue them over the thin wires and ornament hooks. When you’re satisfied, glue the smaller gems and sequins on as well. I like to position mine as randomly as I can to avoid a uniform look. I also think it’s nice to add a few small stars creeping up the rays. 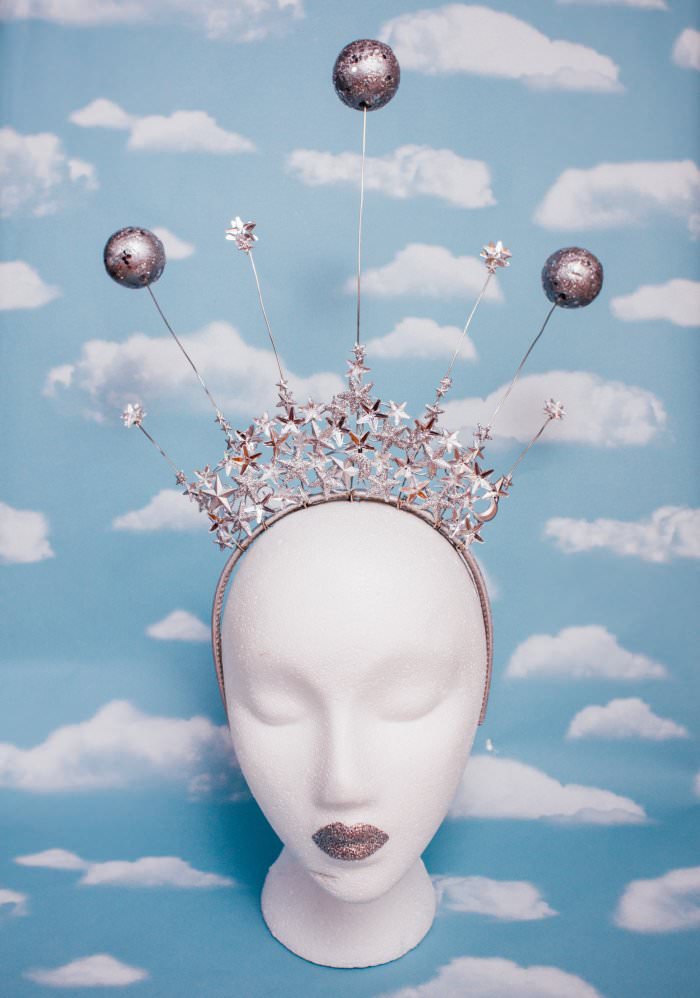 Once you’re satisfied with the stars, grab a styrofoam ball and pierce the bottom of it with a piece of thick gauge wire. Working quickly, place a dot of hot glue on the hole, and slide the ball onto a ray on your headpiece.

On the rays that don’t have foam balls on them, I glued a few stars on top, in little clusters. It’s nice to have something on the back of the clusters to balance out the weight and ensure that the pieces don’t fall off, so I glued a few extra stars on the back as well.

Repeat for the other three rays and boom! You just made a super cute and festive headpiece for all of your galactic galas, holiday celebrations, and daily activities! ♦