Music and new series that offer different tastes of reality. 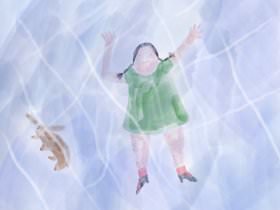 I came across Reverberation Radio while at my job in a bookstore. I was leaning against one of the bookstands—head buried into Patti Smith’s Just Kids, daydreaming of romance and ruthless adventure—and it seemed that the low-fi, psychedelic music playing around me was especially selected for what I was reading about. Since then, any time I’ve listened to Reverberation Radio’s beautifully curated online playlists, seconds turn into minutes that fly into hours as I drift into landscapes of my imagination. I highly recommend putting Reverberation Radio on in the background when you are curled up in bed with a cup of tea and a book—or when you want to dance and slide around the room in your socks! —Kati Yewell

There have only been a couple episodes of See Something Say Something, hosted by BuzzFeed staffer Ahmed Ali Akbar, but I can already tell it’s going to be part of my rotation. Each week, Akbar invites a few guests to swap stories about being Muslim in America—including memories of wearing hijab in elementary school and lighthearted games of “Halal or Not.” The first episode digs into the complicated business of next week’s election and how to respond when asked to speak for all Muslims. The second shares a slew of spooky Jinn stories. Regardless of whether you’re part of the American Muslim community or not, See Something Say Something is a fun yet educational listen that will improve your week and make you think. I’m psyched to follow along. —Maura M. Lynch

Amazon’s series Good Girls Revolt, based on Lynn Povich’s 2012 book, is a fictionalized account of the landmark 1970 gender discrimination lawsuit against Newsweek. In the series, the women who work for the fictional News of the Week have been relegated to researcher positions. News of the Week makes it clear again and again that only men can be reporters and writers, and the women band together to lodge a legal complaint against the company. The characters include some of the real-life women who worked at Newsweek in the ’60s and ’70s (such as writer Nora Ephron) and who represented the case (such as lawyer and now-Congresswoman Eleanor Holmes Norton). Through the show, we get a taste of the realities of being women in the workforce in the 1970s. Even though the series is heavily fictionalized, I found myself learning a lot of history. I’m a fan of period pieces, and Good Girls Revolt delivers. —Diamond Sharp ♦