“It will be really important to show up for each other now.” 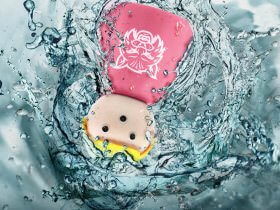 We Know It Was You 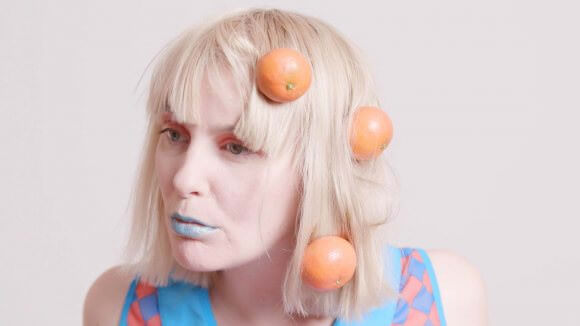 Mega Bog is a futuristic, psychedelic band. It is comprised of lead singer Erin Birgy and a rotating cast of musicians including Zach Burba, Aaron Otheim, Jacob Zimmerman, and Meg Duffy. The band’s pop tunes are clean and percussive, with undertones of experimental jazz. Today we’re premiering the video for “192014,” a single from Mega Bog’s upcoming album, Happy Together.

[Editor’s note: Erin is a rape survivor. The video is an artistic response to sexual assault, and in the interview that follows, Erin discusses it. Neither the video nor the interview is graphic, but both address the subject of assault head on.]

I spoke with Erin earlier this week. We talked about finding the language to deal with assault, and why she believes it’s important to communicate with family members who may not share your political views.

ANNA WHITE: We’re premiering the video for your new song “192014.” What was the inspiration for the video?

ERIN BIRGY: The intent behind the video is, I guess, linked directly to the music, which feels cagey and manic. The song is about being raped and having your community turn its back on you because nobody knows how to talk about those kinds of things. I don’t know, I guess it’s hard to talk about still. I grew up around horses, and it’s like [there are] a lot of really beautiful people and creatures who are treated like they are being rounded up and put away.

What is the significance of the numbers in the title?

It refers to the year 192014, when all of the contents of the record took place, and I liked the ambiguity of numbers.

It fits well with the more abstract elements of the song. You seem to have a lot of nontraditional, almost jazzy elements in some of your music. Do you come from a jazz background?

I don’t, actually. I wasn’t allowed to play jazz for a very long time, even though I was very into Alice Coltrane. In Seattle, though, there’s this amazing thing called the Racer Sessions, and I started going to them. It’s a really inclusive event where people who are not from jazz backgrounds can go play with these very, very jazzy people. It’s a beautiful combination, and it influenced me to make a lot more music that stepped out [from what I’d made before].

In the process of recording this upcoming album you moved from Seattle to New York. What inspired the move?

The whole idea of this song [“192014”]. I was raped and couldn’t handle it, and needed the change to feel empowered. I was seeing a therapist who was yelling at me every day. My friends who are very close to me were helpful, but in the community as a whole I felt outnumbered, like people didn’t have the proper language to deal with something. I also needed to deal with it myself. I was trying to get away from specific people, and I was trying to explore what I have in me. And because you are so focused on the individual in New York in a lot of ways, you have to take care of each other, but you have to focus a lot on self-care. So I’m trying it out.

Has writing about such personal and traumatic experiences helped you process?

Being able to document [through writing] helps a lot. It also helps to talk really obviously about some of these things, because not a lot of people have the language.

Definitely—there isn’t enough music being made about the subject, and it’s important.

There is a lot of music being made about it, but it’s still pretty obscure, unless you have someone asking you questions about the song. People process it in an otherworldly way—it is so common, but still so abstracted with the language that’s available. I have a lot of really amazing women friends in particular who write about it. It’s not always as clear, but they use it in the same way to process, to give a voice.

How do you feel about writing music about topics like rape and having a band that is primarily composed of men?

That is a huge form of power for me—being able to conduct all these people who are obviously really talented, practiced musicians and to come to them and say, “This is what this song is about, and this is what we’re going to focus on channeling,” and have them all be like, “Yes, we are going to do that, and we respect you.” It feels really amazing, and like playing music with the people I’ve been playing music with is creating more allies in the world.

In light of the current political climate, do you think creating music like this is even more important?

I totally think it is. I want every voice that needs to be heard to be heard. I wouldn’t even say my voice is the most important voice, especially right now, but this is something that I’ve made and that I’m working on. There’s a lot to say, and there’s a lot of listening to do as well. There’s a lot of sexual violence that goes unaddressed, and a lot of violence against women in general. Having a project that’s out in the world and that’s accepted by my friends and my community has empowered me to have conversations with the bigots inside me, and the bigots inside my family. Hopefully music can inspire people to have more difficult conversations and actually take action to show what they think is right.

Did you grow up in a conservative environment?

I did. We moved around a lot. My mom was a horse trainer, and we grew up in the rural working class. I split as soon as I could—I left when I was 16—but it’s still such a huge part of me, though most of what I was taught growing up was against all of the things that I try to believe in now. It’s so present still. But I feel like I’m privileged to come from that part of the world that’s often demonized, especially now, and take responsibility for it, I guess.

Tell me more about that.

My family’s really small, and it’s full of a lot of love, but they definitely come with a different perspective. They lived in a small town and had that feedback loop of small-town stuff going on in their heads for generations. If I’m not going to talk to them, who’s going to talk to them? I don’t know. It’s intense, but I don’t expect other people to deal with my family in particular. That’s my responsibility at this point, even though I have a life now that is far from it.

If you have any one piece of advice for Rookie readers, what would it be?

That they are strong, they are powerful, and that we are all here for each other. It will be really important to show up for each other now, and to show all the love that you can, and to get angry when you feel it, because it’s true and it’s valid. ♦