A dystopian novel, a photography book, and historical fiction to add to your reading list. 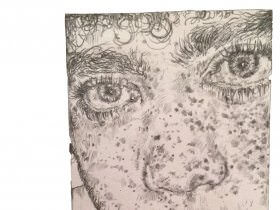 1Q84
Haruki Murakami
2011, Knopf
1Q84 is an alluring dystopian novel full of magic and alternate realities. It follows Aomame, a fitness instructor by day and murderer of abusive men by night. Her life in Tokyo is entwined with the life of Tengo, a math teacher at a cram school and writer. Love and strength connects them in the most fascinating and graceful ways. Their destinies change suddenly as Aomame notices two moons in the sky, and Tengo gets involved in a shady deal with a publishing company. 1Q84 is beautifully written, and Murakami’s voice elegantly creates an incredibly ethereal setting. There is narrative switching in every chapter, which balances the action and suspense of Aomame’s story with the calmness and elegance of Tengo’s. Murakami’s words turn reality into what seems like a dream. As I read, I thought about other worlds nonstop. I was completely immersed in them when my head was buried in this story, and I longed for them when I had to put the book down. Thank you, Murakami, for creating such a beautiful world to get lost in day after day. —Tess Michelle

The Underground Railroad
Colson Whitehead
2016, Doubleday
In 1851, renowned physician Samuel A. Cartwright diagnosed a conjectural mental illness in enslaved black Americans that he claimed caused them to flee from bondage. The condition, termed Drapetomania, resulted in slaves who refused to remain so, running whenever the chance arose. The compulsion for freedom, as well as the journey to it, are the subject of Colson Whitehead’s eighth novel,The Underground Railroad. Cora, a teenaged slave, decides to flee, following in the footsteps of her mother who made the journey when she was a youngster. By reimagining the eponymous network as an actual locomotive ferrying escaped slaves to liberty, Whitehead infuses a refreshing bit of the fantastic into what is otherwise an all too real tale of American horror. His prose is as acerbic, biting, and economical as it has always been. His major protagonist, a sadistic bounty hunter, is America itself—the country that allowed and fostered the cruelties enacted onto Cora in bondage and after. Whitehead expertly shuffles around historical events to render a tale of one woman’s pursuit of liberation. It reads like memoir—so personal and polemical. The Underground Railroad has earned its place among other definitive works of black historical fiction. —Jasmine Sanders

Kids in Love
Olivia Bee
2016, Aperture
I once read this quote by visual-poet Robert Montgomery: “Love is the real temporary light inside us that saves us every day from ourselves, and saves us forever from religion and law.” Photographer Olivia Bee seems to have an intense desire to capture and recognize that familiar tenderness. When you look through her book Kids in Love, you cascade into the turbulent times of adolescence. Even though Olivia’s work is a two-dimensional depiction of a three-dimensional world, it doesn’t feel like that. These images reek of summer smells, young lust, mischievousness, and ambition. Whenever I see someone pick up Kids in Love at the bookstore I work in, I always see the same expression: A slight smile with warmth, but also a tremor of melancholy. This book makes you see (or remember) what it means to love someone and be loved in return. —Kati Yewell ♦