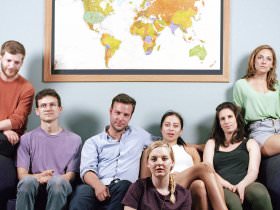 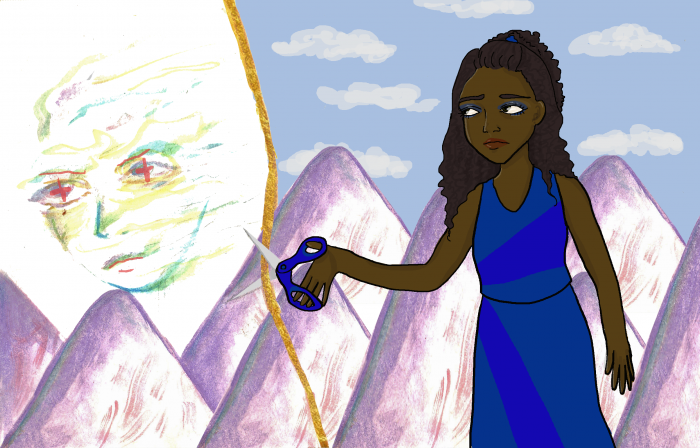 November’s theme is “Awakening,” about the revelations that sweep away your perception of reality and leave you with something harder but realer and more true—until, of course, the next one comes along, and the makeup of your universe changes once again. Usually, I find one new awakening does not negate a previous one; the past ones may become less current, but they were your building blocks, and a cool thing about one’s brain growing—which, good news, is happening all the time right now—is the space it makes for many things to be true at once. There is no conviction, just the circling of possible beliefs to burrow ourselves in until another feels more right. Skating figure 8s upon figure 8s, infinite cluelessness unto infinite cluelessness, be it through writing or hours-long talks with friends or flinging myself onto a stage to do a live play where anything could happen—this is my truest pleasure. The occasional intimation of certainty is my vice.

The most recent awakening for me was discovering the power of calling something “boring.” I first saw it used by Adam Phillips in his essay “Against Self-Criticism,” where he describes the inner critic as such: “It is, in short, unimaginative; both about morality, and about ourselves. Were we to meet this figure socially, this accusatory character, this internal critic, this unrelenting fault-finder, we would think there was something wrong with him. He would just be boring and cruel.” I shared it with a friend I saw later that week and she went, “Ooh, that’s so good! Because ‘mean’ is still kind of sexy. Like we all still want to be kind of mean. But boring is like…yuck. Who wants to be boring?” She would later use the technique to not engage with an ex who’d reached out: “If I thought this was in any way bad for me it would be somewhat enticing. But I know what it’s going to be, so it’s just boring!”

I have gotten so much moony purply melancholic mileage out of the IV drip of sadness that comes from replaying and reflecting instead of going out and discovering. But I was once told that “nostalgia is a yearning for a time we know we can survive.” It can feel transporting, but it ultimately aims to seek only the familiar. It seems edgy and dark to wallow and resign, but it’s also cowardly: I know exactly what I’m going to feel when I do it. What’s the new experience there? Where’s the bravery? I know hope and love are corny, but they are actually so much more lionhearted than the alternatives because they require engaging with the unknown, and choosing to see its majesty. Hilton told me, at my most melancholy, last Christmas: “Hope is more interesting than sadness.” Lesley told me: “Connecting with people is always more interesting than not connecting.” “Interesting,” then, becomes a crucial counter to “boring”!

Of course, some darkness is involuntary, some is grief, some is depression; if I didn’t know this on a visceral level, I wouldn’t be so concerned with finding its antidote. I want to feel like shit when I need to feel like shit, but when I don’t need to feel like shit, why am I still making myself feel like shit? The appeal of predictability also makes an appearance when I try to understand the self-fulfilling prophecy of being obnoxious and arrogant when I hang out with people who expect me to be obnoxious and arrogant. Maybe I really am just obnoxious and arrogant, but I also think that I am a simple stupid animal creature who’s just going: If I consent to act the way this person thinks I will act, then I know how the day will go. It’s a way to see the future, a form of fortune-telling. It’s easier than being open and new, because who consistently has the energy and confidence for that? So then we make ourselves our own smallest Russian nesting dolls by subscribing to our own myths about who we are, but instead of adding layers, they box us in; confine.

Many people avoid dealing with any of that at all by opting out of interactions even as they are taking place: saying nothing, withholding, playing it cool, fronting. I used to feel like “WHAT’S YOUR SECRET?” in the presence of such people. Like they must be in on something that I’m not getting if they never have anything to share unless it’s cynical and nihilistic. At some point it stopped impressing me and now I feel that way when someone is happy and loving. Like, tell me how you are able to move through the world that way!!! What do you know that I don’t???

And of course, the withholding people—and I know this because I can be one myself—are not just nihilistic and cynical; we’re also shy or insecure. My very first post-high school, “Welcome to New York, It’s Been Waiting For You SO IT CAN TAKE YOUR INNOCENCE AND MAKE YOU FALL OUT OF LOVE WITH ALL THE MEDIA AND ENTERTAINMENT THAT BROUGHT YOU HERE TO BEGIN WITH” awakening was basically like: people are not what they seem, don’t meet your idols, art is rigged, etc. And that was disappointing and devastating for a while. But then the second awakening came: People are who they are for a reason, and they pretend to be other people for complicated and deep-seated reasons, too. And then instead of armoring myself or needing to adamantly differentiate myself from someone I disliked (which you only ever really need to do because someone is [a] dangerous or [b] DING DING DING, too similar to yourself), it became a more immediate reflex to just have compassion for them, which humanizes them and takes away some of their power, and also forces me to extend compassion to the part of myself that I recognized in it, which then means I can deal with it more openly and good-naturedly and with less shame/stigma/fear. Making human psychology less mysterious also makes it somewhat boring. Boring. Boring! It doesn’t mean you’re reducing anyone’s lived experience, just taking stock of the fact that there are billions of people on the planet and no one’s personal history is so unique that you should feel oppressed by their enigmatic air.

And now I will wrap this up with some cool shout-outs to my music and writing moms who have made the desire to choose hope over cynicism so much easier and more exciting to grasp—in the face of depression, in the face of all the legitimacy weakly promised by the tortured artist archetype, in the face of being a BIG BAD WOLF in the BIG APPLE and younger than everyone I meet and feeling sometimes like I have to temper my enthusiasm to match someone else’s maturity (a logic I now see is quite backwards; mature people are excited about life because life is exciting; duh).

Rebecca Solnit in her wonderful essay on Virginia Woolf, loving the inexplicable, taking long walks alone: “Despair is a form of certainty, certainty that the future will be a lot like the present or will decline from it; despair is a confident memory of the future.” Why, that makes despair seem almost grotesquely arrogant! Anton Chekhov, in a letter to another writer who criticized him for failing to better explain the psychology of his character’s choices: “Only fools and charlatans know and understand everything.” J’agree, Anton. But moving forward, day-to-day, we still choose hope because, as Solnit also writes: “To me, the grounds for hope are simply that we don’t know what will happen next, and that the unlikely and the unimaginable transpire quite regularly.” So it’s not even really optimism—just the acknowledgment that optimism and pessimism are equally ridiculous and hubristic, but one is less boring than the other. One is stronger. Toni Morrison, at last year’s New Yorker Festival: “Laughter is a muscle. It’s strength. It’s not funny. It’s agency.”

The theme of joy-as-choice is also heavy in the two albums we were lucky to get this year from Beyoncé and Solange: in Solange urging the listener to rise, in her ode to self-care; in the speech that gives Beyoncé’s album its title, in the story of adultery that ends in forgiveness, in the heartbreaking/heart-mending lyrics to “All Night.” My love was stronger than your pride. In the dedication to celebrating black life in an industry, justice system, and world that is overwhelmingly populated with the desire and power to destroy it. I don’t mean to conflate these two people’s very singular works on account of their being sisters, but hearing their mom’s interlude on A Seat at the Table is a kind of skeleton key to comprehending how two people can exercise, all at once, such vulnerability and strength.

Awakening after awakening, Beyoncé’s film includes, toward the end, a shot of a cracked bowl, a piece of Kintsugi (or “golden joinery”). Kintsugi is a Japanese art in which broken pottery is repaired for the cracks to be made visible with powdered gold, silver, or platinum, suggesting that casualties are part of an object’s life, not to be hidden from view, and perhaps creating a new kind of beauty that was not there before.

I guess that’s it. Oh, one more thing. The end of this monologue from Annie Baker’s play John, which I reread all the time to make peace with the impossibility of knowing exactly how you are coming off, onstage or in writing or in life, and how actually freeing that is.

“[…] I went mad and then I was forty-five, which was older than I thought I’d ever be, and then I was fifty, which was older than I thought I’d ever be when I was forty-five, and then on the night of my fifty-seventh birthday I went blind and I stood naked in the middle of my bedroom and all of a sudden I was at the center of the universe, facing out. No more trying to get in anyone else’s head. Oh, what does she think of me? What does that man bagging my groceries think of—nope. It’s just me! Alone in the universe! Standing in the center of my own life. I can’t even look in a mirror. It’s just me and my thoughts and sometimes I have no thoughts at all. Sometimes I just lie in bed in the morning and think about nothing. Imagine that. Before you take a break, imagine that. Sitting in the center of your own life with no thoughts at all about what other people are thinking. They can think whatever they like. You can all think whatever you like about me.”

See our Submit page for information on sending us your own “Awakening” reflections. We’ll be figure 8’ing it together. Which is about the best we can do, and actually a really nice way to live.