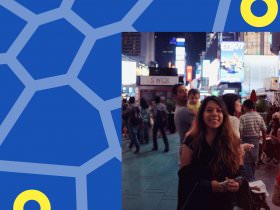 1. New York is leaking. This feels like something I would grasp from a Metro headline, ABC-7 Chyron, but I see it in the Union Square station and the flooded concrete banks of Lower East. Someone burst our bubble.

Woman is dancing with ties near the moving platform…woman is dead somewhere near my school, somewhere in one of the Heights, somewhere in the hole in my ceiling. I hear thumps in it at night that are louder than the subway. I tell myself to become one so they will not decry my languid body a foreign one to expel.

On the train, woman in the corner jolts awake and vomits up an orange chunk duvet that just barely misses my right foot. I have not vomited on a train since age one but they purge me on occasion.

1a. Something I just found out: The two primary definitions for “purge” are opposites within a whole same—

verb: rid (someone) of an unwanted feeling, memory, or condition, typically giving a sense of cathartic release.

noun: an abrupt or violent removal.

2. Some warm parallels: Discussing the fifth dimension (original concept accredited to Miranda July) with Tavi—when there exists a rift between a person’s general demeanor and how they exist in their art; heart attack realization during my daily show run that The Twilight Zone refers to the surreal region of that name as the fifth dimension.

I have a dream in which one of my closest friends is walking alongside me with such a stressed expression that it stays with me when I wake up. I message them and they tell me that they had a dream in which the two of us are confronting their deathbed and traveling the circumference of their life’s roulette wheel until it leads us back to denouement.