The premiere of the septet’s boundary-pushing new video. 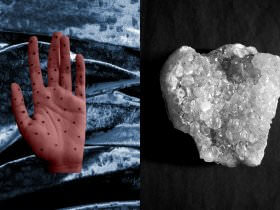 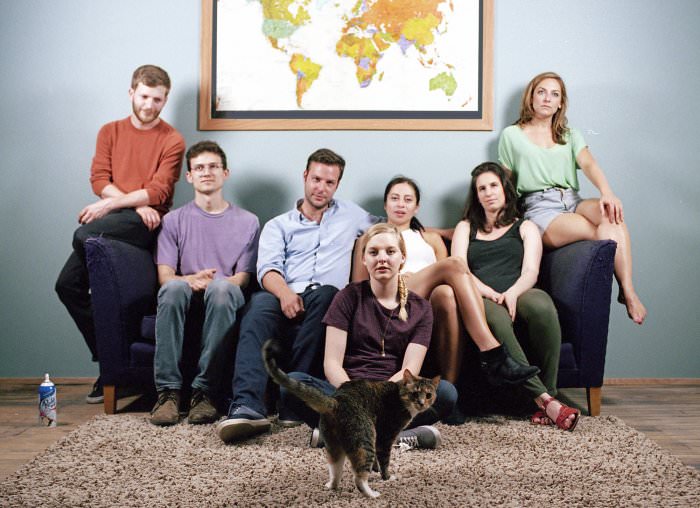 Photo courtesy of all boy/all girl.

New York City-based septet all boy/all girl is all about pushing boundaries. With a theatrical, acoustic sound that darts between experimental and pop, the band infuses contemporary classical and rock elements into eclectic arrangements that are easy on the ears and soul. We’re thrilled to premiere the accompanying video for “Voyeur,” a track from all boy/all girl’s recently released Slagroom LP, today:

Recently, I spoke with the band’s co-vocalist and ukulele player, Danielle Lovier, on the challenges of stage banter and the importance of collecting thrift finds for all occasions.

VICTORIA CHIU: It was interesting to me when first watching the video for “Voyeur” because I knew I liked it, but I almost couldn’t tell why I liked it. The content of the song’s lyrics were so different from how bright and whimsical the visuals were, which prompted a unique response in me. What feelings did all boy/all girl hope to invoke in viewers watching the video, and listeners hearing the track on its own? The experience of listening to the song with and without the accompanying visuals is so different.

DANIELLE LOVIER: Yeah! For sure. The song was written by our bass player, Nick [Rahn], and he had that experience once when he was in college, where he saw somebody in a window who was changing—like these two girls were dancing and changing for the people outside—so that’s what this song is about. And then we had gotten in contact with [the director] Dara Hirsch and explained the song and everything, and she has a kind of Wes Anderson feel to her work that’s more quirky and playful than the song is—it kind of just came through that way.

It was fun to make! We had a lot of fun the whole time. Filming it was so easy going, the whole thing. Leading up to it I was so nervous, and then it was two days and it was so much fun.

Did you ask friends to play the side parts in the video?

The dancer in the window is Jessie [Rogowski], our other singer, but then the little girl, the two teenage boys, and the mailman are all hired actors. Dara got everyone together.

Whose idea was it to do the pull back and reveal shot in the video? That was awesome!

I think it was Dara! That was the probably the best shot of the whole thing. Nick and Josh [Curry] looking so serious is so funny. When we were looking at it after we finished filming, we were all thinking, “Oh, this is so hilarious!”

The video as a whole has a lot of cool little elements in it, like the pink dress and the makeup you wear for a lot of the close-up shots.

Yeah—I just had that dress in my closet, actually! I have a whole slew of weird dresses. We were originally going to go with a ’90s theme for the video, but then I said, “Y’know, I was thinking…I do have this one dress that’s not exactly prom ’90s but is definitely bizarre. It might work.” When they saw it, it was perfect. I found it in a thrift store maybe 10 years ago and I’ve never worn it, but I have a whole bin of costumes in my closet.

I personally like to keep things around in my closet in case I need them in the future.

Exactly! My thinking is that every once in a while, I might need a Cats unitard. You never know!

The name of the band, all boy/all girl, is from a song, right?

And it’s made up of seven people! That’s a big band. Does the songwriting process change for a larger group?

Yes. Nick is the main writer for our music, and he and I kind of go through and write everything. When we first started, we used to have everyone try and write their own parts, but we found that everything had a tendency to become compromised, in a way, when we had everyone do their own thing. So now Nick and I mostly write everything, and then the band members interpret our takes in their own styles.

Do you think it’s harder to write with a bigger group?

It must be fun, though, to have so many other people on stage who you can have that camaraderie with.

Oh, definitely! I can look anywhere on stage during a set and have a different person look back at me. And you can take their energy and incorporate it into your own performance.

Are you guys big fans of onstage banter in between songs?

Ah, I’m just terrified of it and terrible at it! I’ve tried, but I have a tendency to ramble and something I’m trying to get better at is being more comfortable speaking on stage between songs. I have a background in theatre, so I’m comfortable on stage, but being myself and putting a performance on as the band is different from talking to an audience as an actor. I ramble, and then Joey [Campanella], the drummer, will just start hitting the bass drum after a while, like, “Wrap it up!”

You all must be really comfortable with each other from all the interconnectedness that comes with putting music together as a group. Has it gotten easier to take songs from paper to stage as the band has spent more time together?

Definitely, definitely. Nick and I have been setting time aside every week—we took Mondays off from our day jobs, and that’s when we work on music all day long. We bring the music to the band when we have a demo, and the path we follow for our music—what excites us and what excites the band—has become a lot clearer over time.

I read that you all didn’t live in New York when the band first came together.

Right. Nick, Josh, and I are all from Philly—we all went to school together there, actually. Nick and I were playing music as a duo, busking, and just playing cover songs with a few cutesy original songs and we travelled the United States after we graduated college, just playing shows and playing on the streets. Nick and I are dating, but we had actually broken up at the time right after that tour, and I moved to New York and he moved back to Philly. But we were still playing weddings and events together, and we’d have to see each other every weekend, and one day he showed me the new music he was writing at that time. When I heard it, I was like, “Holy shit! This is so exciting!” So he moved to New York and we recorded a whole bunch of demos, and we got back together and posted our demos on Craigslist—that’s how we found Jessie and Hannah [Levinson], and we had a few other members we found on Craigslist who we’ve since swapped out for mutual friends. The band formed in New York, I guess, but everyone in the band is pretty much not from New York, if that makes sense. Actually, our cellist, Susan [Mandel], is from New York, but she’s the only one—she’s from Yonkers.

I visited New York for the first time a few months ago, and it was shocking to me as someone from a comparatively small Canadian locale to see how big and bold it was. It felt like everything I knew and thought I’d love about New York was accurate, which was very surreal. Did you have any expectations of New York before moving there that you’ve come to realize live up to or don’t quite match the hype?

It’s funny, because I kind of had the opposite reaction. I had visited New York a few times in high school, and when I’d lived in Philly I had never really liked [NYC] for whatever reason. But when I graduated, after doing that U.S. tour—because I went to school for acting, I had an agent—I was told by my agent that I was going to move out to New York City to do auditions—and I was like, “Sure…?” So that’s the only reason I moved out here. And when I first arrived, I really hated it—I immediately wanted to move back to Philly. I was so anxious, and I hated taking the subway, and it was hard to meet up with friends, and I didn’t like my job, and everything was extremely overwhelming. But after that first year, my mindset changed—I don’t know what changed exactly, but I feel totally different now and I think it would be very, very hard to leave here now. It has everything, and everyone in New York City shares a mentality I don’t think you can find anywhere else. Now I think it’s a great place, but it did take me a while to get there.

So what’s on tap for you all after the release of the Slagroom EP?

We’re going on tour very soon—we haven’t been on tour in a while, so that’ll be exciting. No Canada, but we’ll be heading down around Florida.

Ah, not too many bands visit Canada!

I wish! Nick and I, when we were just a duo, wanted to play Canada, and border patrol was really weird when we were coming through. Something about taxes, I think? I’m not exactly sure why, but they stopped us and checked our website and it was very strange. We would definitely love to play Canada, but logistically it can be challenging.

If you ever do make it to Canada, I’d definitely love to see you! And if you stop by some smaller towns—outside Vancouver and Toronto, the people would be happy to hear you play.

Maybe someday! I think it’s more fun to play smaller shows. We love to play smaller towns, because we feel like the energy there is so much more vibrant and the people are so much more excited because fewer bands go through the area. So it’s like the shows are always crazy, and places like Columbus, Ohio are super fun for us every time we perform there.

There’ll never be anyone at those smaller shows who is indifferent to the music.

Right, exactly! If you’re ever back in New York, let us know, too, and maybe you can catch us there. Sounds like you’ll be back soon—maybe we’ll cross paths sometime! ♦