The premiere of a spooky video by a self-described “Halloween band.” 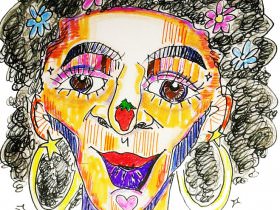 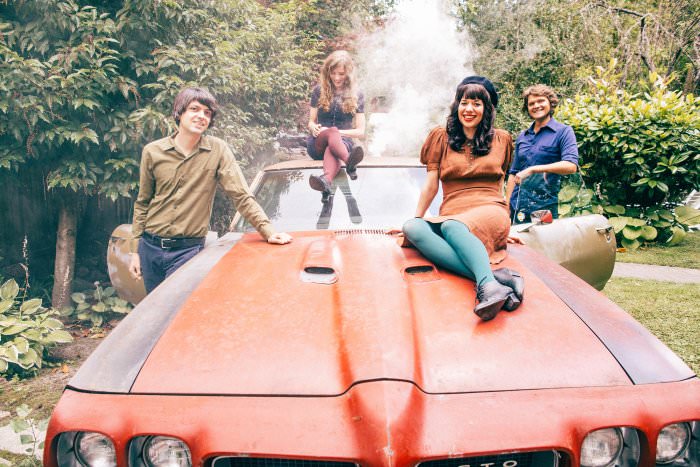 Tele Novella’s music is the sonic equivalent of Halloween candy—spooky and sweet. The “macabre pop” group from Austin, Texas, is made up of Natalie Ribbons, Jason Chronis, Matt Simon, and Sarah La Puerta, and I’d recommend their tunes as a soundtrack for your tricks and treats this fall. Today we’re excited to premiere their video for “Even Steven,” a sugar-coated claymation nightmare created by artist Amber McCall.

Last week, I spoke with lead singer Natalie about the band’s love of horror movies and what it means to be a “Halloween band.”

ANNA WHITE: We’re premiering the video for your song “Even Steven.” It’s really cool! What was your inspiration for the video?

NATALIE RIBBONS: The video was done by an artist named Amber McCall. I am a huge fan of her artwork. I love how it’s very Halloween-inspired and very feminist. It has kind of a gross sense of humor. I ended up reaching out to her a couple years ago and asked her to do some fliers for our last tour, and we became friends. She did the cover for our EP that came out on Lollipop Records, called Cosmic Dial Tone. The art is this hovering woman with huge breasts who has her legs chopped off.

Me too. I really love her sense of humor. We try to work with her whenever we can. We work with a lot of artists, but she’s our favorite. We approached her about doing the video [for “Even Steven”], because we wanted it to have Halloween vibes and she’s perfect for that. We gave her hardly any direction, and she took off with it. She’s a cool, wild lady who lives out in Los Angeles and makes Halloween art, and we consider ourselves to be a Halloween band, so it’s a match made in heaven.

I love that! Why do you think of yourselves as a Halloween band?

We all really love Halloween a lot. We like to dress in costumes, and a lot of our songs and lyrics are mindful of spooky and macabre subject matter. We’re going more and more in that direction all the time. We’ve been described by a lot of people as “macabre pop.” We kind of liked that and let it roll, and I enjoy that description more than some of the more generic ones.

Oh man! So you dress in costumes at shows?

We do in Austin, but we haven’t taken that element on tour yet. There’s so little room in our car that bringing costumes hasn’t seemed practical. Next year, we’re going to start making that a bigger priority. We’re also working on doing more set-design stuff; we actually have this Halloween set built for our very next show, which is on Halloween! If we can figure out a way to take that on the road I would be really stoked, but there are some logistical aspects that haven’t been sorted out yet.

It’s so cool! The back centerpiece is a giant, red-lipped mouth with vampire fangs, and then the two front pieces that go on the left and the right in front of the stage are big green monster-witch hands with sharp red nails coming in to claw the performers on both sides.

Did the same artist who worked with you on the video make those?

No, Thor Harris built those. He’s in a band called Thor & Friends with our bandmate Sarah. He can build anything. He’s such a talented guy.

You have so many different art elements!

Yeah, I guess that’s true! It makes it more fun, when you feel like you’re putting on more of an event than just playing another rock ’n’ roll show.

Why are you interested in making shows more of a spectacle?

When you’re touring a lot, which we have been, it’s easy to fall into a pattern of what songs you’re playing and in what order. It’s easy for the night to lose its luster a bit. You have to do things to keep yourself entertained, as you may be performing for people who have never seen you before, so to them it’s new. Today, two hours ago, I got home from a month-long tour on the East Coast, and our most fun nights were the nights that random stuff happened. Like, we made some custom balloons that say the name of our single, “Heavy Balloon,” so we brought this helium tank on tour. There were a couple nights when, just for fun, we took the helium tank up on stage and all breathed the helium and then sang in harmony, in Mickey Mouse voices. Whenever we incorporate even the smallest stuff like that, we entertain ourselves as well as entertaining other people. That’s important.

I’ve seen that you have a very specific band aesthetic. How did that come about?

That’s kind of surprising to hear, but it also makes me really happy! We do try to have an aesthetic, but we also don’t totally know what it is. We know what we want people to perceive, but we don’t know what they actually perceive, so I’m happy it seems like a consistent aesthetic.

That makes me so happy! I always worry that it’s not over-the-top enough to come across! I mean, getting everybody to pick outfits is such a funny process, because we don’t live very close to each other. We coordinate it separately and then hope for the best. It’s been fun, though, seeing how things turn out kind of randomly, and we’ve been really lucky. We are so fortunate to have a lot of really talented friends, including photographers, because when you’re working with a photographer who really knows what they’re doing and knows you personally, a lot of the magic happens on the other side of the lens. I’ve learned that from having terrible pictures taken by people who really don’t get you, and they don’t have a feel for what you’re like at all. We’re all really big fans of spooky stuff in all different genres. When we go on tour, we have this cord so that we can hook up the computer to the TVs at cheap hotels and watch horror movies at night, which is really fun.

Speaking of your spooky aesthetic, this video is so perfect for Halloween. Did you plan for a Halloween release?

It’s so funny. We thought this video was going to come out first, and that the video for “Heavy Balloon” would be out second, but everything got a little mixed up—it all worked out very well, but that was not the initial plan!

Do you have any advice for Rookie readers?

Yes! I’ve learned this lesson way too many times, and I keep learning it again: It’s so important to trust your own vision and your intuition. It’s the most important thing about being an artist of any kind. It’s great to take advice or suggestions and listen to what other people have to offer to your project, but at the end of the day, [you have to trust yourself.] I can’t tell you how many times I have not given myself enough credit and told myself I was better off taking the advice of someone who was maybe a professional in the field, or somebody who seemed to know better—and sometimes that is the case, but sometimes it isn’t. You need to be able to tell the difference and say, “Well that’s great but this is not what my vision is.” ♦