I didn’t want to be ridiculed, and I was suppressing myself because of it. 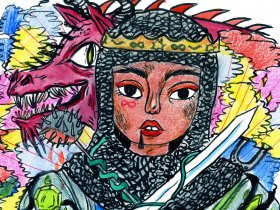 Confession: I was one of those kids who sort of faded into the background when I was younger. Quiet, shy, never one to raise my hand in class, or cause a stink about homework. I took whatever authority figures in my life gave me—even if that meant sitting in silence as my sixth grade teacher mispronounced Chinese figures’ names, or insisted that one percent of two hundred was twenty. But this obedient persona was learned; it wasn’t the real me.

The creation of this persona was largely the fault of where I started my education. My first elementary school (I switched schools after fourth grade) instilled in its students the idea that humorless obedience and extreme dedication to school were the most important qualities a person could have. And because I strove to please my teachers, I internalized those teachings and never quite let it go, even after changing schools. Ergo, the birth of an attention-averse bookworm.

My general lewk at the time helped reinforce that notion. From second grade through most of junior high, I sported ill-fitting, wiry, SpongeBob-themed glasses from the kids’ optics section at Costco. My mom also dressed me every day because I didn’t understand why I would want to choose my own clothes (a disastrous choice, judging from past photos of myself).

I also didn’t involve myself much with anyone, besides my one close friend I met after first grade, because I was so nervous about drawing attention to myself, lest I say or do the “wrong thing.” I felt the air tighten when I neared groups of girls huddling and talking. I was picked last for teams, and when teachers called for partners I was never anyone’s first choice. Because I was so withdrawn, I think people found it hard to approach me in the first place, and because I never made much of an effort to change that, their opinions of me remained stagnant.

When I got to junior high, I became more aware of what it meant to come out of my shell—I saw my friend make more friends, while I stayed isolated, afraid to dip my toe into the scary world of socializing. It was lonely, so I went out on a limb and began to slowly—hesitantly—reach out. The people I eventually met and became close with made my middle school experience a lot better. I explored the option of dressing myself, too. I had no idea what made me look and feel my best, but I figured that anything was better than my mom dressing me for eternity. My parents encouraged my independence, which fueled my drive and allowed me to branch out further. It was empowering, and I increasingly felt that the Old Me—largely friendless, socially inept me—was fading into the past.

Despite my efforts, an unshakeable rep followed me: People who knew me in elementary school remembered the girl who was scared of talking above a murmur and they continued to treat me as if I were still that person. It weighed me down. Although I had my own methods of dealing with that weight—unspooling the thoughts from my head through daily journaling; long, hot shower thinking-sessions; meditative drawing; decompressing over the phone with friends—a part of that heaviness was constantly present. I kept wondering, What if the people I’m surrounded by day in and day out think the version of myself that they’re seeing is completely different from who I really am—FOREVER?

There are many schools of thought here, but in my head there were only two: One was that, logically, I should be totally content in who I was, regardless of how other people saw me or how many people deemed me worthy of friendship. Other people, after all, aren’t who anyone should look toward for validation in life. But as an insecure pre-teen who had always been slapped with the same tired old reputation, it was hard to gather that confidence and trot out, with 100 percent self-assuredness, the entirety of who I was without being a tiny bit afraid of scrutiny. I fell into that second group, but I yearned to transition into the first as I moved forward.

I was becoming increasingly obsessed with distancing myself from who I used to be, and any kind of reminder fueled that obsession. It all came to a peak when a boy I kinda-sorta like-liked in eighth grade saw me take off my glasses in English class and lay them on my desk.

UGH. What was I supposed to say? If I’d had more self-confidence, I probably would have told the truth: that I did not watch SpongeBob, actually, and that they were just the inexpensive frames we’d picked up during a sale. But being the person I was, I internally freaked out because (A) this guy was actually talking to me (yay!) but (B) he was making fun of me (oh, god). I don’t remember what I said—I only know I immediately turned bright red with embarrassment—but I do remember that after that point, I felt the irrepressible need to make my outer self reflect the person I really was inside. I knew I rocked on the inside. My friends knew I rocked on the inside. But the thought that there were people out there who would pass over me because of who they perceived me to be was crushing.

I didn’t fully get for a long time why I was so damn obsessed with transforming myself, but as I grew older it gradually began to dawn on me: I was afraid of being myself—my inner identity secretly loved to joke around, pull pranks, and have fun, but doing those things would mean opening myself up to other people and their opinions. I didn’t want to put myself out there because I didn’t want to be ridiculed, and I was suppressing myself because of it.

In high school I finally started putting a plan I’d been thinking about into action. Most of the people I’d known in elementary school had fallen away from my life by that point, and it seemed like the perfect time to emerge as someone new. I cut the long hair I’d had virtually my whole life into a pixie; I stopped wearing kid-size glasses and invested in a set of frames I actually liked; I stepped out every day in whatever took my fancy: beanies, shirts from the guys’ section of clothing stores, blindingly bright Converse sneakers with loud laces. When I felt like I needed some variety, I’d don bright rainbow cats-in-space graphic tees and printed Zach Galifianakis leggings—attention-drawing clothes I never would have dared to wear before, but now made me feel comfortable and excited. If I felt like that was getting old, I’d dress up as a character—a take-no-shit punk, an otherworldly space cadet, a witchy teenage girl—and try out a new persona for the day to see what fit me best. When the outside of myself began to more accurately reflect the inner me, I started to feel more at home around other people. I also began to hold myself back less and less when I had something to say.

It was absolutely frightening every day for me to try something new and step just a little more out of my comfort zone, but I did it for me—to push myself and force the world to forget the dated persona I’d once been associated with. It was the most exhilarating thing in the world to run into an old elementary school classmate I hadn’t seen or spoken to in years at the bus stop; when I greeted her, she commented she wouldn’t even have recognized me unless I’d said hello. I was way more confident and far less awkward, she said, than she remembered. At my grandfather’s funeral, distant family members who hadn’t seen me for years remarked that I seemed like a totally different person. Little did they know that was exactly what I wanted.

The effects of transforming myself were twofold: All that experimentation helped me come into myself a little easier, since I was always trying new hobbies, attitudes, and outlooks and could find out through experience what fit best for me. This allowed me to leave behind past versions of myself forever by opting to re-emerge as a different person. While I never sacrificed hobbies that had always been interesting to me for the sake of re-inventing myself, experimenting helped me feel less anchored to the interests I already had. And it was so much fun. It helped me get over the baggage of feeling as if I couldn’t do or say certain things because it wasn’t “in character” with the unpopular perception everyone had of me for so long.

The thing about grappling with a reputation of being a loner, and all those other labels I was stuck with, is that none of those qualities are inherently bad—but they weren’t an accurate depiction of who I was, and that hurt. I’m not going to say that my myriad of self-transformations solved all my issues with labeling, because that’s not true. Depending on my demeanor and how I present myself on any given day, I’m perceived differently—sometimes accurately, sometimes inaccurately. It doesn’t bother me as much as it used to, and now I tend to shrug my shoulders and move on when I’m mislabeled because I’m more certain of my core identity. It surprised me when I realized it: The moment I started putting concentrated effort into showing the world who I really was, even when it was incredibly uncomfortable and awkward and scary, that’s when I really started to shine—and I’m never going back. ♦