The L7 guitarist and lead singer shares details about the band’s new documentary. 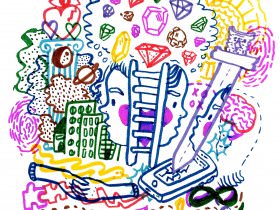 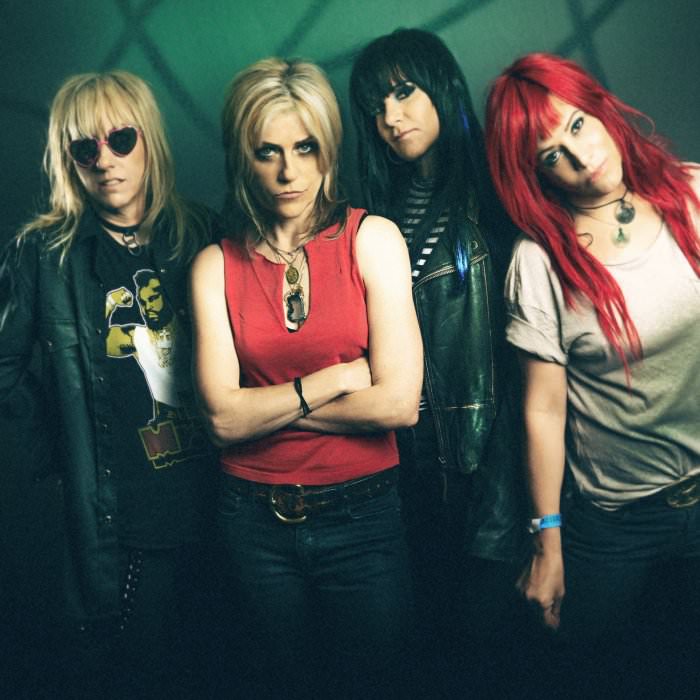 Photo of L7 by Rob Sheridan.

L7 was one of the very first bands to make me feel empowered. I discovered their song “Shove” when I was 13. It was hard, fast, and furious with an incredible opening riff. It felt like the women making the music got me. I didn’t have bill collectors or landlords, but I knew what it meant to feel closed in, trapped by other people’s wants, needs, and expectations—trapped especially because I was female—and wanting to kick, scream, and shove my way outta there. They were outspoken. They were tough and loud. They were weird and goofy. They were my heroes.

All of my teenage admiration came rushing back when I watched a screener of their new documentary, L7: Pretend We’re Dead. I found myself headbanging along with the music, laughing as they pulled pranks (like roller-skating on stage during a Nick Cave performance), and at the end of it all, blown away by their honesty about what it was like to make a life and a living out of art. Here’s a sneak peek featuring Shirley Manson of Garbage, sharing her own L7 fandom origin story:

I was thrilled to speak with L7 guitarist and lead vocalist Donita Sparks about being 15, pulling pranks, feminism, and the importance of giving back to society.

STEPHANIE KUEHNERT: So you grew up on the southside of Chicago. What were you like as a teenager and what drove you to make music?

DONITA SPARKS: I hit a transition at about 15. I was a good student and an athlete up until then. Then, I started smoking pot and got into punk rock, so I changed quite a bit. Much to my parents’ dismay, because they really wanted me to go to college and I was starting to think that maybe that wasn’t what I wanted to do. I got a guitar when I was 16 and started playing, but I never thought that I’d seriously be in a band. I had fantasies of that, but it wasn’t my driving force.

I feel you on that transition at 15. That sounds very familiar.

Yeah, 15…You know, punk rock was not popular at that time at all. I had green hair—I was the only kid with crazy-colored hair in my high school in 1979. And you do take a lot of shit for that. I [went] from [being] this really popular kid to [an] outcast. I got the whole spectrum of youth in a way. You know what I mean?

Yeah, definitely! So, I watched L7: Pretend We’re Dead and I loved it. Our theme at Rookie this month is Cast of Characters, and in the film, you guys certainly [embodied this as a band]. You were self-described oddballs, nonconformists. Can you talk about the roles you played within the band and what made you mesh?

Well, we all wore many hats and brought different stuff to the band. Suzi [Gardner] had our first musical template. I brought politics and cultural commentary into the lyrics. I also brought my own musical influences. I liked catchier pop, surf, Ramones type of stuff. Suzi liked more heavy stuff, kind of blues based—she brought the Sabbath. And then Jennifer [Finch] had a lot of drive. She got shit done and was very social and connected. I think Suzi and I are a little bit more of loners in a way. And Dee [Plakas] brought a down-to-earthness and a pragmatic personality. And Dee’s a lot of fun and an excellent drummer. With Dee, we’d be a good band, but we got really good with Dee coming into the picture.

I’d describe L7 as a fierce band of women who are also funny as hell. The film showcases this side of you, there were a lot of great pranks on tour and in general. What was one of your favorite pranks or quintessential L7 tour moments?

Oh god, we had a lot! We jumped on stage a lot with other bands. Usually on the last night of tour when [we] were touring with some band, [we’d] play a prank on them. It’s kind of inside-joke shit, but it’s a loving sort of tribute. So we’d dress up as Faith No More and impersonate them on stage. We’d dress up as the Melvins on stage, just shit like that. We were never the kind of band who pissed on each other’s food or any of that kind of jock shit. I know bands who do that, but we’re just not that jock and we’re not that gross. People may think we’re gross, but we’re actually not. We’ve got more wit than to piss on each other’s food.

I love it. That’s awesome. You were also overtly, unapologetically feminist. When I think of you, I think of Rock for Choice. I came from a pro-choice, political household, but seeing so many of my favorite bands supporting choice and women’s health gave me a voice as a teenager. I know you say in the film that you had to step away from it and focus on the music. But in this current political climate, are you considering bringing Rock for Choice back?

I am not. I think that’s something for the younger people to pick up and get behind. I think we put in our years of doing that and we raised a lot of money. But, it’s time for some women who are still in their childbearing years to step up and put some Rock for Choice benefits together—or men! [The Feminist Majority Foundation] would love some people to step up and do a concert.

In the ’90s, there were a lot of bands that were very proactive with starting organizations and benefit concerts. I’m sure a lot of bands are doing that these days on a small-club scale, but I’m not actually seeing as many artists stick their necks out that far. They may say something in public, and that’s great, but maybe put your money where your mouth is and do some fuckin’ benefits. You can talk all you want about how cool feminism is—and feminism is very hot these days. It used to be a total put-down word. I never saw it that way, but people would put you down by saying, “What are you? A feminist?” And now it’s a big, cool thing with these pop stars. And that’s great, but why don’t they all do a concert for pro-choice? I’m calling out Beyoncé. I’m calling out Lady Gaga. I’m calling out Miley Cyrus. All of ’em. Why don’t they do a Rock for Choice show?

Hopefully people will step up to your challenge.

In the film, the L7 story is described as rags to riches to rags. You’ve got this sheer determination that never quits, but you don’t shy away from the truth that it can be very hard to be an artist and support yourself. This is something I’ve experienced as a writer and the honesty about your struggle really hit home for me. Could you speak a little bit about what kept you determined in spite of the challenges?

Are you talking about early on or when we started to decline? Because it’s two different things.

It is. I don’t know if you want to speak to both?

Well, when we were a younger band, the only direction was up, up, up, up. We started at the total bottom. And what kept us going was the fun of it. We also wanted to be a good band, to travel, and play some shows with our friends. Then we got to be a pretty good band, and then our popularity started to slump. I think what kept us going then was we thought we could rebound with people buying our records. But the music industry can be pretty cruel and for most bands, once you’re done, you’re done. But for some bands, you may have a hit next record or you might be on a soundtrack that would bring you up again. I think we were hoping for that. Something to happen that would financially sustain us.

Yeah, I get that. Now you are back, though. You recently had a reunion tour. What brought that about?

Fan interest, mainly. Fans were gathering on social media sites and we saw that. We [asked the fans], “Are you for real? Will you show up? Or are you just liking our page?” You know what I mean? There is a big difference between being a passive fan and liking things and then actually showing up for the gig. And they did. It’s been amazing. We’ve had people traveling thousands of miles to come see us. It’s crazy. It’s really, really great.

That’s awesome. And so what about this film? How did that idea come about?

We had home movie footage and so many unseen photographs that the band had taken of each other. And I started to archive it and get it digitally transferred. Then I met a director at a dinner party and asked, “Would you like to take a look at this?” and she said yes. She wanted to make a doc out of it.

Yeah. So, it’s not like we had this crazy story of all these twists and turns and things. It’s not an uncommon story about a band, however we were an uncommon band.

And like you said, it’s not a crazy story, but it really resonated for me as an artist. I wasn’t going, “Oh yeah, this is not like “Behind the Music: L7” where we’re going to find out all the crazy secrets, but I get to see a band I really love and what their day-to-day was like and how they existed as artists.”

Yeah, I think there’s a lot of honesty in this film that you don’t get much from a lot of artists because being an artist, you’ve got to front a lot. You’ve got to front that you’re strong. You’ve got to front that nothing affects you, nothing hurts your feelings, nothing gets under your skin, nothing pisses you off. You’ve gotta be cool. Never let ’em see you sweat. But this film, I think we were pretty honest about how we were feeling, how things affected us, and so I think that is kind of unique. It only comes from 15 years of being away from it—that maturity and viewing things in hindsight. You can look at things a bit more objectively than when you are in the moment.

Totally. So where are you at in the process with it? When can people look forward to seeing it?

It’s debuting at DOC NYC on November 11. We will all be there for the premiere. I’m in a mix session right now for some of the music just to make sure it’s good and loud.

One of the most important parts, right?

Alright awesome. That’s all of the questions that I have and I’ll let you get back to it unless you have anything else you want to add.

Say hi to your readers for me. Tell them that any kind of art, or any kind of being productive that is giving back to society, is really worth doing and that’s the coolest shit you can do. ♦