A collection of interviews, a superhero comic, and a novel about identity. 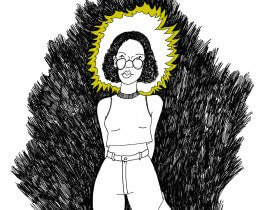 It Chooses You
Miranda July
2011, McSweeney’s
As a teenager, I started interviewing different writers and artists for my zine. I so badly wanted to be an adult, safely on the other side of high school, which compelled me to seek out people I looked up to try to figure out their secrets, and to find the best way to navigate creativity and growing up. I regretted that it was difficult to find ways to interview people outside the creative industry. I couldn’t google the funny woman who worked at the supermarket to get her contact info, for example. The only other option was working up the courage to explain why I wanted to interview her in person, which was prohibitively awkward. In It Chooses You, Miranda July uses the well-known classifieds booklet PennySaver as a way of working around these boundaries. While her motivations for interviewing people weren’t quite the same as mine–she mostly conducted hers as a way of working through writer’s block—I still found the book to be heartwarming in all the right ways. Through the text, accompanied by photos taken by Brigitte Sire, July delicately captures the quiet magic of life. In a direct way–unlike a script, or a novel–July manages to illustrate how truly illuminating connecting with others can be. —Rachel Davies

Homegoing
Yaa Gyasi
2016, Knopf
I have always thought fictional accounts of slavery were primarily intended for the descendants of the enslaved, those of us still grappling with its ghosts. The fictionalization of the slave narrative allowed the depiction of perspectives, which may have been impossible to explore within nonfiction; the agony of a mother haunted by the spirit of her murdered baby; a generational saga; an epic, examining the remnants of the institution on the progeny of enslaved Africans. With Homegoing, Yaa Gyasi attempts to relay one such unexamined perspective: the effects of enslavement on African-Americans as well as continental Africans. Homegoing is a tale of two sisters: one carried to America aboard a slave ship, the other remaining a free, wealthy woman in Africa. The family tree is bifurcated and Gyasi prompts us to follow the two separate roots, one in West Africa, the other in the American South. Gyasi takes care to hit all of the historical beats definitive of fiction dealing with the Antebellum South: The Civil War, fugitive slave laws, sexual terror, cotton. I take umbrage with her depiction of the dialect of African-Americans, as well as how little time she dedicates to the development of African-American characters. However, I appreciate Homegoing and think it is worth a read—not because it is perfect or because there is a dearth of literature depicting enslavement, but because Homegoing further complicates the narrative of American slavery. Books, especially fiction, should challenge the ways that we think, and Homegoing does its job. —Jasmine Sanders

Ms. Marvel
G. Willow Wilson
2014, Marvel
I had never read a superhero comic before I picked up Ms. Marvel. Diving into a seemingly infinite series of stories that take place within the expansive, elaborate Marvel Universe was intimidating. The guy-centric culture surrounding comics also felt less than welcoming. Ms. Marvel is intertwined with preexisting Marvel superheroes, but it doesn’t hold onto sexist comics conventions—including that female superheroes should be sexy while they save the world. Ms. Marvel is Kamala Khan, a Pakistani-American Muslim teen. She is into writing fan fiction and protecting her home of Jersey City, New Jersey. Her morphing superpowers reflect her own exploration of identity and presentation. She initially changes her image to align with her idea of a superhero—white and blonde—only to realize that she is much more powerful when her powers are used to enhance her fighting abilities rather than to change herself. When reading, I often stop to take in the deep magentas and bright oranges of the pages, and then I inevitably find some hidden joke in the background—like Mario (of Super Mario Bros. fame) lounging in his apartment with some mushroom decor. Where the idea of a comic series first felt daunting, it now feels exciting. There are five volumes in the series so far, and I can’t wait for the next one. —Madeline Keyes-Levine ♦