The Submissives: Do You Really Love Me?

“You can do whatever you want. You can’t really make mistakes because you’re in charge.” 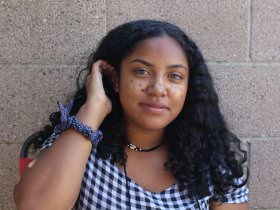 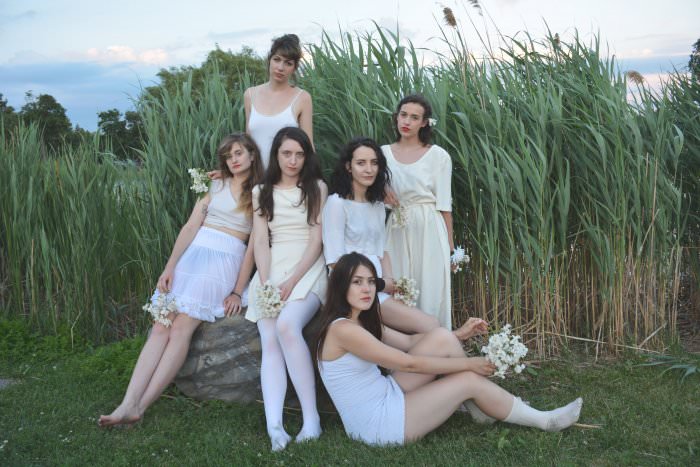 The Submissives are a six-piece band based in Montréal. Fronted by Deb Edison, the band is fueled by a passion for music and the bonds created through music. While Deb has been playing music all her life, the Submissives have a DIY-ethic that makes their music just as enjoyable for them to play as it is to listen to. I imagine listening to their droll anthems during meandering bike rides, with their distinct layered sound and direct, personal lyrics, catching at just the right moments.

Their upcoming album, Do You Really Love Me?, will be released on Fixture Records on September 9th. Today, we’re premiering a sneak peek of record in its entirety:

I recently got to chat with Deb about growing up in tiny towns, dropping out, and challenging yourself to do what you want to do.

RACHEL DAVIES: What brought you to music initially?

DEB EDISON: I started playing violin when I was six or seven. I was really into violin, and obsessed with being a famous fiddler. I thought Ashley MacIsaac was the coolest person ever.

Did your parents make you play the violin, or did you want to?

I asked my mother—shoutout to my mother, thank you for everything you did for me. I used to listen to all of the classical music CDs my parents had and daydream that I could be one of those people.

When did you branch out and start playing instruments other than the violin?

When I went to high school, I got really into rock ’n’ roll, and I started obsessing over being a drummer. That was my next obsession, after the violin. I only started playing in bands and doing that kind of stuff full on when I moved to Montréal.

Where did you grow up? Was there a lot of encouragement for the arts there or did you mostly do it as your own thing?

I grew up in this little tiny town south of Winnipeg. I think there are like 150 people now, and there was probably 300 when I was growing up. I don’t know the actual population. [Laughs] It’s small and it was a really nice place to grow up, that’s for sure. I don’t really want to live there anymore, but my parents are still there. There definitely wasn’t much encouragement for the arts. I guess I was just really obsessed with my parents’ CD collection. Starlight Express, the Andrew Lloyd Webber soundtracks, The Cars, Tears for Fears, and also Smashmouth. I was really obsessed with Smashmouth at a certain point.

You moved to Montréal partially because of the music scene, right?

I was really more interested in making videos and stuff at the time because I used to go to the Cinémathèque in Winnipeg a bunch. It was also a lot for the music scene because I’d look up bands and they’d never go to Winnipeg, but they’d always go to Montréal.

Totally! Did you go to school in Montréal?

Yeah, when I first got here I was going to Concordia University. I was doing a program, a fine arts program, with a lot of performance art and video. I really enjoyed it but I dropped out.

I dropped out, too—no worries!

Really, yeah! I was just so into being in bands, that was way more important for me. I’m still going for it so I hope I didn’t drop out for no reason.

How did you meet band mates in Montréal?

In this band, except for Marlee who I’m singing with, everyone was a new friend I’d just made. I had the idea for this band, and I would record these mini demos and close my eyes and think, “Who could do this?!” [Laughs] It came together pretty quickly, asking and thinking of people. I asked a lot of people I thought were cool and talented and always out at shows to support the scene, but not really in bands. Everyone I asked was really excited about it. The first few practices were like, so magical.

You said that many of them didn’t play music before. Do you think that lends a certain energy to the band?

Well, Marlee is a super musician, is incredible, and is a very talented multi-instrumentalist. Everyone else, maybe they hadn’t played them before, but they picked up their instruments really quickly. I guess one guitar player had been playing before, but it wasn’t a problem for anyone to pick the instrument up. Mostly, it’s just about having to pick the parts [of the song] up together and to communicate to each other. It takes a while, to develop this weird kind of language for everyone to figure out. It’s been like that for all of my bands, and we’re still trying to get our language solid. Everyone’s super talented and very musical, even if they hadn’t played the instrument before. So good!

At least from my perspective, six is such a large number of members to have in a band. How do you manage scheduling, and making sure that everyone’s voice is heard in the creative process?

Well, that’s definitely a really challenging part for me because the first time I had a band where I was teaching them stuff, the band members were changing a lot and I wanted a lot more control. This is different because I wrote all the songs and recorded, so the actual releases don’t involve the band yet. It’s a little weird because it’s a band but we haven’t recorded together. It’s just hard when we’re not writing music together because I feel like that’s the most important part of it all. But, at the same time, everyone else may have something in mind that they think is the most important thing. [Laughs] I’m really happy that everyone in the band has told me what they want. The more that we talk about it and say our ideas, the better. I think when we record together we’re just going to get so much closer and it’s just such a fun experience. It’s going to be recorded on tape, and I have such high hopes for it because I really like the person who we’re recording with. I think it’ll be a really special moment. I mean, we’ve only been jamming together since January so it hasn’t been that long. It’ll take time to feel more solid.

Do you have any words of encouragement for someone who is passionate about music but is struggling with picking it up?

I honestly feel this way: Do whatever you want because it all sounds good. I’ve played in projects and things where it’s completely improvised and there was a time when I was playing stuff totally as an improvise but latching onto songs in that. I have a solo thing where that’s exactly what I do. Honestly, if a song collapses I feel like, don’t even bat an eye. Just keep going—that’s what’s interesting to watch. If you admit that you messed up, you kind of break the feeling that audience members have when watching you—they’re snapped out of that world. For me, just stay in that zone and do what you can. You can do whatever you want. You can’t really make mistakes because you’re in charge. There are no rules. ♦