Part three in a series. 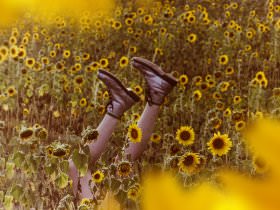 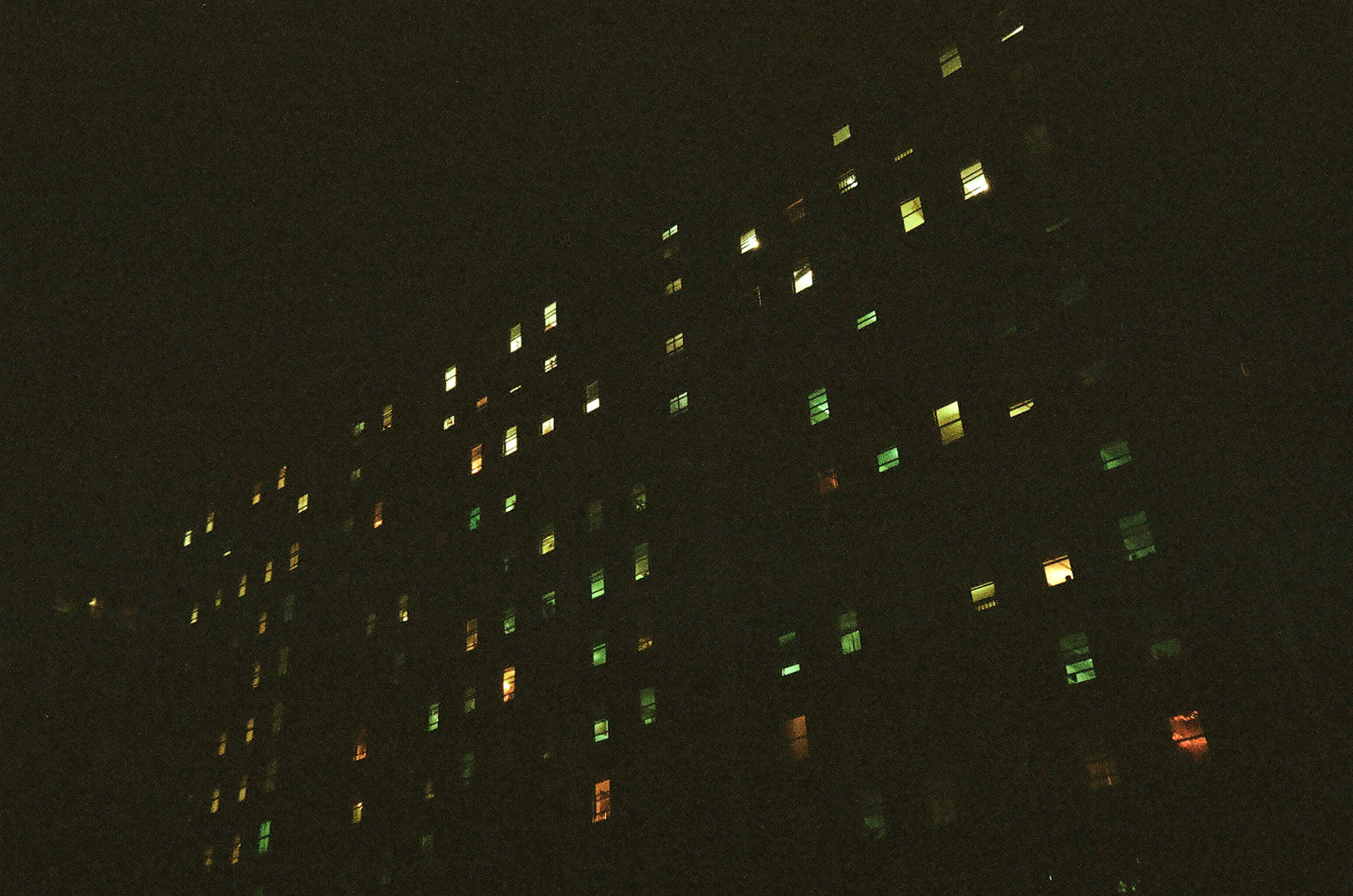 This month’s theme is Infinity, about what cannot be articulated; the infinite feelings, colors, sounds, experiences that we do not have words for. We’re publishing a few entries from Tavi’s diary that show how, for her, “it’s gotten shockingly effortless to live in Infinity, and trust that I’ll retain what I need to later, and if not, accept the price of a life fully lived.” This is part three in the series; read the first installment here, and the second here.

Take the angel from Wings of Desire and place his perch over Manhattan. Eight stories up on Essex and Grand, I stood in the center of our empty living room, buzzing with a neon sign Petra had made of a pink iMessage that says, “k bye.” She put on a song I’d never heard. The first 10 seconds sounded like Pop Rocks, vibrating through my cheekbones and all over my skull. Our angel descended among the skyscrapers, coming into Technicolor.

Welcome to your life
There’s no turning back.

What do I remember from this journal-free void? We ate at Panna II where the ceiling disappeared in an entanglement of lights and decorations for every milestone. I caught handfuls of glitter during the finale of Hedwig and went home to put more around my eyes. I met up with Peter back at the club, marveled at the Bronze of it all, and worked up the nerve to ask a stranger to dance. I paused our making out in the cab to ask if my mascara had smudged, right there below my bottom lashes, see how that happens when I close my eyes? He said he didn’t. He said it was fine. I looked for other ways to put off participating. Then I returned to a sense of home I’d found at a different guy’s place, but only when I was first to wake up, staring out at the morning blue while the A/C hummed and the blankets smelled cold; solitude next to a sleeping body. He came before Man; was something of a Young-Girl; a writer with a pseudonym who observed with varying degrees of accuracy that I picked at my skin when I felt anxious, that guys must’ve resented my success, that I read as always in control with only occasional flickers of candor. In the span of three weeks, he gave me a whole tour: Coney Island, the Storm King Art Center, the park in Dumbo, the Jamaica Bay Wildlife Refuge, a wooden raft off a Chelsea pier, and bowling with his married friends. So many photos squinting at the sun, stretchy smiles, a backdrop of sky. But not the photos I’d envisioned. A few days after I ended things, he came by to return some stuff I’d already said I didn’t want. “Actually, can we go to your roof and talk?” He asked if I knew about the recent allegations made against Tao Lin by a former younger girlfriend. In our own time together as a couple with an age difference, had I felt like I’d been taken advantage of? Would I say everything had been consensual? More to the point: Did I have any plans to make him look bad?

Opting for a type of self-absorption that at least puts itself out there from the start, I asked my friends if I could hook up with a douchey male artist who flirted with shocking amounts of unearned confidence. They all shrieked “NO!” in perfect unison; I cowered on my stool in the powder room blacklight. A different douchey male artist agreed to take my song request if I would join him behind the DJ booth. He put his arm around me but I stared straight ahead, absorbing the shapes of the room in slow motion, silently anticipating a moment of grace. “I will sit right down, waiting for the gift of sound and vision.” It never came. I lay in bed for nights to follow and replayed any instance of physical contact that could possibly pass for more, keeping up an old habit of feelings-masturbation, trying to locate a memory that would silence all thought and envelope me in something resembling love.

I stared blankly at adults who recognized and scolded me. I yelled at a guy who took a photo of me dancing with another, drink in hand. And at a girl who thought I should hear about a debate she’d just had regarding my relevance/value/worth. In the morning, I flopped down on Dennis’s bed and teared up in the pool of stage lights, listening to Kenny talk about this thing he wrote and the people we were pretending to be. “It’s called This Is Our Youth because Warren gives his youth to Dennis, and Dennis gives his youth to this lifestyle.” The next time Jessica took a last look before leaving the apartment for good, I noticed the pile of coke on the table.

It’s my own design, it’s my own remorse
Help me to decide
Help me make the most of freedom and of pleasure
Nothing ever lasts Forever
Everybody wants to rule the world.

August, in early previews, my sister visiting. We were having lunch at Angelica Kitchen, hot and sunny at a table by the window, when I got a phone call from Stevie in her family’s house in the desert. She read to me a letter I’d written her my junior year, thanking her for being my mirror in the sky, the moon watching over me when I sat at my window in my teenage bedroom and played “Landslide” on guitar. Her voice came through the phone: “Don’t forget the little girl you were and are.” I didn’t know how to say that that was actually my latest project.

Early September, still in previews. I left between rehearsal and the show to promote our play on Jimmy Fallon. Back on the stage for notes, I tried to shake my lasting disgust at the way my voice had sounded, my shoulders had hunched, my face had moved.

ME: I think I just sounded kind of dumb. Or I didn’t really say the stuff I wanted to get in there. The pacing was odd. But, you know, I’m gonna die, and the people who were watching are gonna die, so it doesn’t super matter.

ANNA: OK, but see? Right there? How easy it is for you to know that things just end and that we’re all gonna die? Like maybe an awkward date or a one-night stand or a fight with a boyfriend isn’t the end of the world? Jessica doesn’t have that.

I told myself while waiting to knock on the apartment door that this was the only night of Jessica’s life—which is really true of every night, as that night is happening, but I didn’t totally know that yet. I stared into the wood grain and remembered Kenny saying that theater actually isn’t doing the same thing over and over, “Because you’ve never done the show on September 4th, and you’ve never done it on September 5th, and you’re a different person, and Michael is a different person, and the audience is different, too.” Heraclitus, via Bluets: “No man ever steps into the same river twice, for it’s not the same river and he’s not the same man.”

“She wants tonight to go well,” Kenny would say. “You can play her as a bitch and make Warren look stupid and get a lot of laughs and a lot of the lines will work, but then it doesn’t make sense why she’d sleep with him, and it’s not as sad when it falls apart at the end. Actually, you’ll notice that almost every time the conversation falls flat in Act I, she’s the one who tries to pick it back up.” She is trying to connect, but sees so much in the way—what he could be thinking of her, whether he just wants to sleep with her or actually really likes her, how she’s holding her cigarette, how often she should say she smokes. “I don’t know. Like a pack and a half on a really heavy smoking day. Maybe like half a pack a day if I’m, like, in the country.”

KENNY: How was your date at Coney Island?

TAVI: It was really fun and nice! I mean at first I was trying to play it cool, but then I was like, What am I doing? He WANTS to have nerdy conversations and so do I!

The first act is not a plain upward slope from guardedness to complete authenticity, but a series of attempts to connect, followed by reasons to pull back, followed by glimmers of trust—in the other person, in oneself, in whatever’s happening right now. Finally, she stops performing, and he says what she needed to hear, and they leave the apartment for a night at the Plaza, not just in youthful recklessness, but hard-earned friendship, plus attraction. She enters the apartment too inside her head, and he helps to bring her out, but it’s very hard to stay there, and so as soon as she’s given reason in Act II to believe that the connection wasn’t real or that she was used or mocked, she goes back to sabotage. Stanley Cavell in his essay on King Lear, “The Avoidance of Love”: “We would rather murder the world than permit it to expose us to change.”

In the last week of previews, crumbling under my own self-doubt, I reverted to the snobby Jessica that I had first read her to be. She wasn’t as complex or interesting, and she gave Warren less to do. But she was clearly supported by the text, and words seemed more trustworthy, more like proof, than whatever my instincts would do on their own. I could keep the scene from knowing more than I did by playing the same withholding girl the whole way through. I could sustain some level of not-completely-regretting-thinking-I-was-qualified-for-this by evaluating each beat as soon as it was over, justifying my acting choices and assuring myself I pulled them off. I could half-listen to Michael while anticipating my next delivery, instead of putting myself at risk for receiving a human feeling.

Every time I played that Jessica, our wavelength collapsed into one straight line. The stage deflated beneath my feet. I turned the most earnest love scene into the end of a sci-fi movie: a web of ladders folding into itself, portals zapping into nonexistence, revealing the lifeless bedroom of a very young girl. It was all just in her head! ♦