“If we can inspire some kid to pick up a guitar or start a band, that would be cool.” 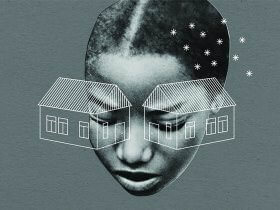 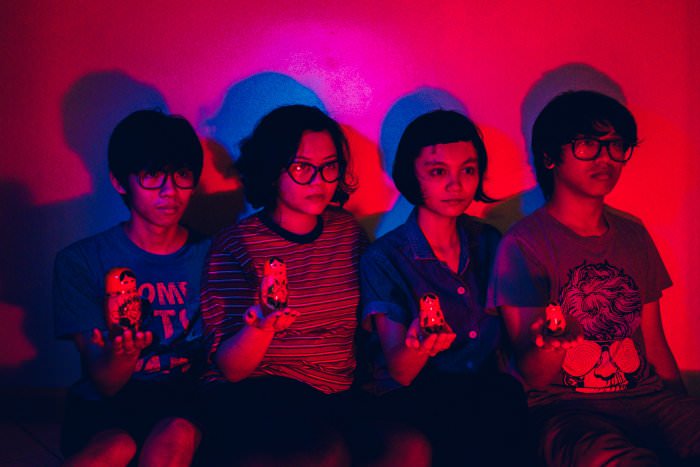 Photo courtesy of the Buildings.

Try to google the Buildings, and you’re likely to come up with a bunch of generic entries. It’s sometimes a struggle for the band to be noticed, but they say they don’t mind. Hailing from the Philippines, the four-piece is composed of Mariah Reodica on guitar and vocals, Alyana Cabral on guitar, Kean Reformado on drums, and Dominic Zinampan on bass. Today we’re delighted to premiere “Lucid Sister,” the second single from their debut album, Cell-O-Phane:

Here’s the Buildings’ own whimsical description of what’s happening in the video: “A mysterious suitcase is unwillingly dragged on an adventure. A dentist unexpectedly conjures a magic trick. Clumsy guitar solos. Suspense, action, romance, drama, science fiction, and more—all in one!” Fun!

A couple weeks ago, I got to chat with Mariah about what it’s like to film on a green screen, her tendency to geek out about chord progressions, and her visit to San Francisco’s Musée Mécanique that involved miniature farts.

Why did you name the band the Buildings?

It’s kind of silly because it’s hard to come up with a band name, and usually when you have a band name, it gives you an idea of what the band sounds like. For example, Panic! At the Disco or Beach Boys. But the Buildings doesn’t really give you an idea of what we sound like, and I like that. It’s so generic, but now, later in the game, I realize that it’s generic often to a fault. It’s hard to google our name, it’s hard for people to find us. It’s OK. It’s already there. Social media isn’t everything anyway. I mean, when you’re in a band, it’s such a big thing. But that’s not what we’re in it for.

Can you tell us about “Lucid Sister?”

I wrote the song—the structure, the chords. Then I gave it to the band and we did the arrangement. I don’t like explaining what songs mean because if anyone wants to interpret it the way they want to, sure. It’s a very simple song. Sorry, it’s hard for me to tell what songs mean. In a lot of the songs we write, the lyrics are very vague or very nonsensical. It’s not something you can interpret with a clear definition.

What was your concept for the video?

A lot of it is on chroma, or green screen. I’m a film student, and I’ve always wanted to work on green screen. A lot of my favorite bands have music videos with chroma stuff going on—really surreal or silly stuff. I wanted to try it out. Every time I travel, I take a lot of footage and save it in case something comes up. It just so happens that this was the perfect opportunity.

What kinds of footage did you include in the video?

Interesting things. I used to take a lot of photos, but I realized that I just breeze through them. And then I have a bunch of photos that I haven’t processed from my trips. But with videos, I can always use them for something. When I go out, I also like taking audio of places. I have a lot of weird recordings, which help me recall a place more than a photo itself. There are a lot of things you can’t capture with photos. In San Francisco, in Fisherman’s Wharf, I went to Musée Mécanique, which is this museum full of those mechanical machines where you put quarters in and the things animate for a bit. They have really conventional stuff like carnivals, tea parties, fairs. But they also have really weird stuff like tiny opium dens. So I put my quarters in all the weird stuff there. There was one that said, “Don’t use this machine if you are easily offended.” When I put my quarters in, the people in there started farting.

That’s so interesting, though! Back to the band: Was it a natural decision to come up with the kind of sound that you have? Or did you experiment first?

We’re still trying to figure it out. I mean, [something like] the term indie rock…A lot of people have problems with it. It’s very contested. Especially since indie rock’s definition in the ’90s is different from what it means now. It’s different in the West, and it’s also different from what we mean in the local scene. It doesn’t feel right.

So you don’t put a label on the sound? Because that restricts you?

Yeah. And I don’t know, let people decide what they think our sound is like. Someone said “fuzz pop,” and that was like, “OK, that makes sense.”

Yeah, because your voice sounds kind of riot grrrl too.

Really? Oh gosh, because sometimes I wanna be tough—I wanna be like Carrie Brownstein of Sleater-Kinney. Instead, people say I’m super cutesy. I’m not!

I guess you do a good job balancing the music with your voice so that it doesn’t sound too cutesy. It’s not twee. Your voice could fit in the twee category, but then your music puts it in a different category.

That was my biggest frustration for the longest time. You know, I used to do solo stuff. I’d record with my iPhone in my house, and it ended up sounding so twee. But now that I have a full band, I get to use a lot of distortion and fuzz and drums. It’s so much fun. In the band, both of the guitarists are girls, and usually guitar is seen as a masculine thing. Of course, things are so different now than they were in the ’90s. I’ve read Kim Gordon’s autobiography—it’s very powerful. People think that Aly [our guitarist, also from Ourselves the Elves] is very meek, or she looks sweet. And she is really soft-spoken, but when she plays guitar, she can get loud. Even though people kind of underestimate us because of our mannerisms and the way we act or dress, we get to counter that through our music.

Another thing that I wanted to ask was, ’cause you have a lot of influences, and you mentioned it in a previous interview: How do you find the balance between integrating your influences and your own sound?

I believe that nothing is original. There’s this quote going around: “Poor artists imitate, great artists steal.” I’m not saying that we’re great artists, but if you’re so focused on being original, you lose sight of the bigger picture, which is that a lot of great music is born out of homage or aspiring to be like someone. You can’t remove that twist you give to it from the equation. I don’t know if it was [Brian] Eno who said it but, if you give people the same guitar riff, they’re all gonna play it differently. Even if it’s the same notes, the same tempo, they’re all gonna be different, even in some really minute way. All of us are kind of nerds when it comes to music. Kean and I, we can spend entire car rides just listening to Sticker Happy by Eraserheads. We can listen to it over and over and pick out like, “Oh, that was a cool drum fill,” or “Oh, I like that little sound bite they used,” or “That was a really good riff,” or the way they vary the chord progressions. Nerdy stuff. And we kind of steal from that. There’s a song called “Balikbayan Box” on Sticker Happy. It starts with a drum machine, and then when the chorus comes in, it’s with real drums. So you see all these little production tricks—it’s still not gonna be entirely derivative.

It’s also kind of like paying homage to the artists.

Yeah, it’s not necessarily in a bubble. It’s more of like, whatever feels right in your gut. Listening to other things helps you realize it. It’s like something in your toolbox that you can use. Like your mental catalog of tricks.

In terms of the DIY element, did you experiment with different materials and instruments?

The idea of DIY is so different from what it was in the ’90s. Even the idea of what’s “professional” and what’s not is so blurred. I guess for us, I wouldn’t be able to say that it was DIY in the conventional sense, but we definitely did do it on our own. We wanted to have the time to record it at our own pace without worrying about studio fees. It was a lot of fun setting up the space, trial and error. Basically, all the information is out there on the internet. You can take online courses from Berklee [College of Music] about music production. And if you’ve learned from Berklee, does that still mean you’re an amateur?

Regarding the album, why the name Cell-O-Phane?

That’s another long story. It probably took six or seven months between the time we started and the launch. For the first four months, we had no idea what to name it. We always thought that a name would come up eventually. Once we laid down the basic tracks, the foundations of everything, my mom had a steak dinner for us at my house. So we were just talking, and that’s when we came up with the album name. Someone said “cellophane,” and we added the hyphens to make it sound like those [generic] products. You know like in the ’80s. The ones with the really groovy packaging. It doesn’t mean anything either. The name “Cell-O-Phane” is as meaningful as the name, “the Buildings.” I don’t believe that, “Oh, everything is a symbol of everything.”

Do you have any goals for the band?

Honestly in the long term, 10 or 20 years from now, that maybe some college kids will come up to us and be like, “Aren’t you from the band the Buildings?” and we’ll say, “I thought no one knew about us anymore. Our album’s out of print.” Or if we can inspire some kid to pick up a guitar or start a band, that would be cool. ♦