Skating Polly: Across the Caves

“We need to actually compare music, and not just group bands together by nothing other than gender.” 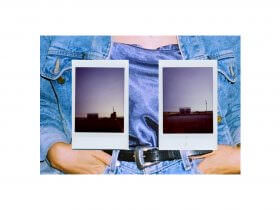 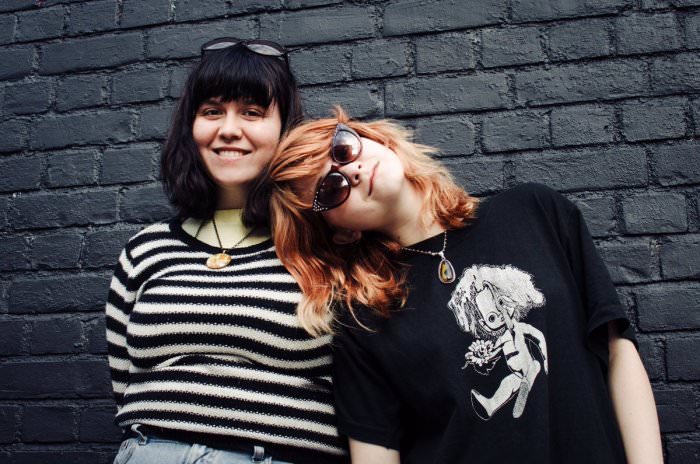 Stepsister duo Kelli Mayo and Peyton Bighorse formed Skating Polly in 2009, when they were nine and 14 years old, respectively. With their captivating combination of saccharine vocals and traditional punk grime, Skating Polly’s self-described “ugly pop” has grabbed the attention of a variety of music icons—Veruca Salt and Babes in Toyland to name a couple. Today we’re premiering the dreamy video accompaniment to “Across the Caves,” one of their anthemic songs:

I had a chance this month to chat with Peyton and Kelli about their favorite music, upcoming projects, and gaining the attention of legendary ’90s bands.

ANNA WHITE: So, we’re premiering your video for “Across the Caves.” I’m super excited about it! It’s really cool!

KELLI: It wasn’t un-fun, though. It was still fun and super awesome.

That’s good! I love the tin-can phone motif in the video. What inspired that?

KELLI: I told Sofia that we wanted to make a video with a pretty clear storyline, because our videos don’t usually have storylines. We just look for things that are interesting or pretty or try to create a certain mood. So I told her to listen to the song and tell me what comes to mind. What she took from the song was that it was about trying to relay a message. We thought about doing something with postcards, but because of the vocals and the way that Peyton sings, she felt like we were trying to get a very urgent message to someone—though she wasn’t certain what that message was. We made the tin cans like cellphones, like you could send texts or send photos, and she made it really literal and used lyrics from the song, and that’s what we were sending back and forth. It was really cool.

You guys have been playing together since you were nine and 14, correct?

Has playing together from such a young age impacted your music?

PEYTON: Yeah, it has definitely impacted our music. It’s made it so we’ve learned how each other’s minds work and how we write songs. We’ve made a system—I think that’ll just happen anyways if you work together for a long time.

What is your system?

PEYTON: I don’t know, we just really know how each other work, and are able to work well together.

PEYTON: Also, the cool thing about starting from such a young age is that we’ve taught ourselves all of the instruments we play. On our first album, we were writing songs on instruments that we couldn’t really play and we were just playing around. It makes it so the focus is just the songs—it was always about the whole song.

Do you write songs together, or does one of you write the music and the other write the lyrics? What is your process like?

KELLI: Usually whoever is singing a song wrote the lyrics. Sometimes we’ll write lines for each other’s songs, but mostly we write on our own and then maybe the last 20 percent of the song is what the other one will do. We edit it together, and the finishing touches are what really makes the song.

PEYTON: Sometimes we’ll get together and write a song 50-50, and a lot of the times those are my favorite songs.

KELLI: Yeah, one 50-50 song that we wrote is actually the last song off our last album, The Big Fit. We sat down one night at 11 o’clock and thought, We should write and record a song. We had an eight-track recorder, and we took turns writing line by line and recorded it.

PEYTON: And really nothing has changed since we first wrote that song.

How old are you guys now?

Do you still live together?

Being in a band together as well as being stepsisters and living in the same house—do you get sick of each other?

PEYTON: We get in little squabbles every once in a while, but we share a bedroom, and we spend almost 100 percent of our time together, and we don’t get sick of each other. In fact, we get kind of uncomfortable whenever we’re not together.

KELLI: Yeah! Little things that you should be able to do by yourself, we like to have each other around for. Like, “Oh, I’m going to the post office, want to come with me?”